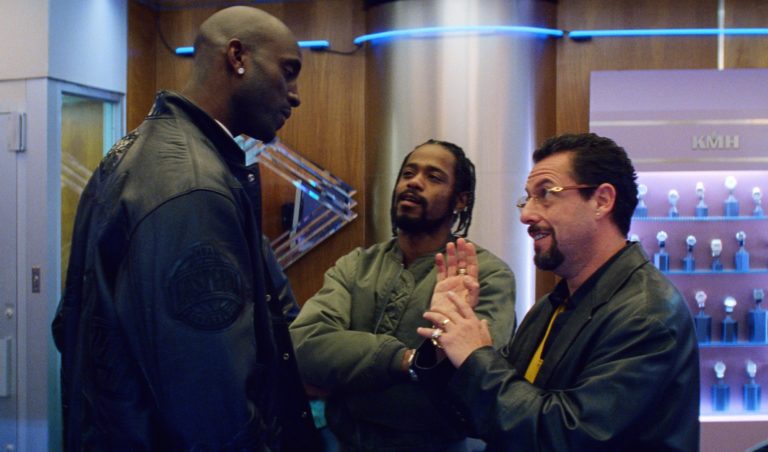 This is my third consecutive year making the trip to Telluride, Colorado for the Labor Day weekend film festival (“the Show”) at which Oscar winners often make their stateside debuts. Enchanted by the town, the crowd, the films, and the festival at first sight, each subsequent year, my friends and I have added a day to the trip to both to allow ourselves a little more time to enjoy the truly magical town. This time, that meant flying into Grand Junction (an hour longer drive than Montrose — the Telluride airstrip is mainly for private flights), which saved more than enough on airfare to make the extra day cost-neutral.

This also meant getting into town for an uncommonly warm weekend, enjoying a rare quiet day downtown, acclimating to the 8,750 foot elevation via gondola-accessible cocktails, and chasing mountainside waterfalls all before surrendering to four days of near-constant filmgoing. The dream, I suppose, is to keep up this trend until I’m somehow a part-time resident.The Show kicked off on Friday and my agenda included three world premieres. Since these won’t open in Seattle until much later this year, some brief appraisals below with more to follow closer to wide release.

Ford v Ferrari (dir: James Mongold) is set in a time when young American servicemen, freshly back from World War II, had money in their pockets and were horny for the sophisticated automobiles of Europe. A young upstart named Lee Iacocca convinces old man Ford (“the Deuce”, played with boastful resolve by Tracy Letts) that the solution to slumping sales is to juice the company’s sex appeal by building the world’s fastest racing car. A failed attempt to acquire Ferrari goes spectacularly wrong, deepening a longtime rivalry and launching a quest to build a car that can win the prestigious and grueling twenty-four hours of Le Mans with American ingenuity. With that, this old-fashioned movie is off to the actual races.

We meet British race car driver Ken Miles (Christian Bale), salty weekday mechanic and weekend racer, brashly annoying everyone in his path, including friend and squabbling partner Carroll Shelby (Matt Damon). In the prologue we see him grittily becoming the first American to win at Le Mans. Years later, he finds himself out of the racing game due to a bum ticker, building fancy sports cars, and using his fame to sell them to rich idiots. Iacocca recruits this unconventional duo to head the multi-million dollar to make Ford fast again. Despite the title, the real conflict is at home, between a stifling top-down, design-by-committee approach and these savants who just want to be left alone with their toys.

It’s impossible to deny the pleasures of James Mangold’s telling of this true tale of ingenuity. The cars are cool and incredibly loud. No matter the time of day, everyone is bathed in glorious warm light and accented by dramatic lens flares. Bale brings a canny energy punctuated by occasional wistful philosophical turns; Damon a restrained regret, good-natured seriousness, and steadfast determination. However, character development is limited for the leads — grit and a love of fine engineering above all else — and is paper thin for the rest of the ensemble. A wife and son exist for the purposes of reaction shots of concern or elation. As Leo Beebe (Ford’s director of special vehicles), a clean-shaven Josh Lucas practically twists a villainous mustache whenever he slinks on screen to thwart the efforts of our heroes.

And so, as the movie stretches to two and a half hours, the initially fun roar of the race track starts to dull the senses. Daylong races are unfold in a repetitive series of cuts — zooming car, gas pedal, straining odometer, driver’s face, crowd reaction — that attempt to heighten the drama but obscure who’s actually winning. The near universal comment about this film is that it’s the kind of movie that Hollywood rarely makes anymore — big budget, big stars, not superheroes. One just wishes that it had taken all of that to make something that zipped more than it dragged. Despite the talent involved, it feels like the finished product would have benefitted from a little more work under the hood. ☆☆☆

In Judy (Rupert Goold) Renée Zellweger makes a long-awaited comeback in this biopic chronicling Garland’s last dark and tumultuous year. As the movie opens, she and her children return from a series of low-paying gigs in the heartland to find themselves evicted from their Los Angeles hotel home due to overextended credit. A residency at a London dinner theater separates her from her children, but offers a last shot at putting her disastrous finances in order and regaining custody. Even there, amid adoring sell-out crowds and a highly-competent and caring minder (Jessie Buckley), it’s a rocky road of self-sabotage.

Garland’s time in London includes lots of performances, an ill-advised romance with the much-younger Micky Deans (Flint Wittrock, embodying the entrepreneur with a mix of hustle, scheming, and adoration) and a rather touching late-night interlude at the home of a pair of gay superfans that honors her enduring importance to that community across generations. As for her ongoing difficulties, the film casts Garland’s persistent insomnia as the root cause of her drinking and pill-popping; and flashbacks to her childhood acting career under the oppressive control of Louis B Mayer as the core of her rebellious adult behavior and persistent anorexia.

The film itself is fairly routine, but Zellweger’s performance is nothing short of tremendous. She captures the paradox of Garland’s magnetism in the spotlight and troubles offstage with dextrous aplomb, sympathetically embodying the star as fierce, dejected, anxious, and resolute. And she sings all the songs herself! When it all comes crashing down, you can’t help but feel for her struggle. If you feel a bit of dust in the air during an especially corny closing number, at least you can’t say it wasn’t well earned. ☆☆☆

Uncut Gems (Josh & Benny Safdie), the latest from the Safdie Brothers, establishes their lack of interest in ever letting their audiences feel comfortable, even for a minute. If anything, the Telluride programmers who described the film as “a heart attack” were understating the relentlessly frenetic auditory assault. Set to a jarring Oneohtrix Point Never soundtrack, the film opens with a mining accident, hustles deep into the earth, where the camera dives into the fractal delights of a rare opal and emerges from Adam Sandler’s rectum during a routine colonoscopy.

He’s as an over-leveraged diamond dealer, juggling dozens of interdependent financial gambles (Eric Bogosian is especially menacing as the holder of a high interest loan) as well as a family on Long Island (Idina Menzel, as the long-suffering wife who’s long over Sandler and eager for a divorce) and a mistress in the city. As he navigates them, a shaky camera follows from his hectic store, through risky deals at pawn shops, a tense family Passover, school musical performances, and even to an afterparty in which The Weeknd makes an appearance. The ever-growing anxiety is palpable, a constant flurry of yelling, accommodation, scheming, and poor impulse control.

Amazingly, the central scheme involves a substantial role from professional basketball player Kevin Garnett as himself (he’s brought into the shop by a high-profile liaison played by Lakeith Stanfield) and a seemingly mystical opal. It builds to a pulse-pounding finale involving high-stakes sports betting, the 2012 Eastern Conference Semifinal between the Boston Celtics and the Philadelphia 76ers, a tense stand-off, and a helicopter to the Mohegan Sun.

The intro to most Telluride screenings begins with an acknowledgement of the fancy Meyer Sound systems installed to provide the highest quality audio to these makeshift movie theaters (I saw this one in a place that’s usually a community gym) and they certainly got their money’s worth. The audio mix is an essential part of the film and it never lets up, to a nearly painful degree. I got out of the screening well after midnight and was so fully frazzled that I couldn’t sleep for hours. It was easily the highlight of the first day of the festival, a welcome shock to the system, and a rescue to a day of otherwise conventional filmgoing. ☆☆☆☆