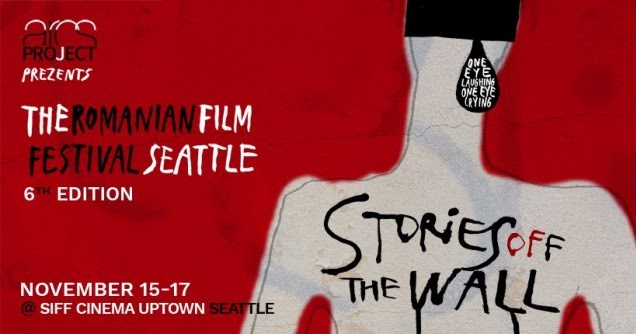 Friday night will see the kickoff of the sixth edition of the Romanian Film Festival in Seattle. It’s put on by the American Romanian Cultural Society. It showcases some of the finest films from Eastern Europe, with a theme celebrating the 30th anniversary of the fall of the Berlin Wall.

I went to the festival last year for the first time, and had a great time seeing some films that I might not otherwise have had the chance to see. I love the programming with a mixture of old and new films from Eastern Europe, including this year’s Oscar submission from Romania, The Whistlers. As noted in the interview below, this year’s festival includes films from Bulgaria, Ukraine, and Moldova. My friend and colleague Tony Kay wrote an excellent preview here.

To learn more about this festival, I sent ARCS executive director Otilia Baraboi some questions to answer by e-mail.

This year’s RFF is focused on the Berlin Wall, obviously a very big part of Romanian history. Why did you choose to highlight this and plan a film festival around the fall of the Berlin Wall?

First of all, this year we celebrate a round number, 30 years since the Fall of the Berlin Wall and the collapse of communist regimes in Eastern Europe. Our film festival, now in its sixth edition, has been focusing on a narrative or a theme that brings many audiences and communities together. It is because of the Fall of the Berlin Wall that Eastern Europeans came to the U.S., before or after it happened. This history doesn’t belong only to the Romanians, to the Germans, or to a specific nation in Eastern Europe. It’s universal, speaking across generations and cultures. Given the actual political climate, when US leadership is talking about building walls with our neighbors, I think our festival theme is an open invitation to reflect on this episode and make sure it is not replicated here, in one form or another.

How was it curating this festival different from the festivals of years past?

This year we opened the schedule to films from other Eastern European countries – Ukraine, Bulgaria and the Republic of Moldova – that are not represented by a film festival in the Seattle-area. It has been interesting, and challenging at times, to work with these communities and get them involved in programming, promotion, and not to mention sponsorship. This being said, we are happy to continue our collaboration with the Bulgarian Movie Circle – this is actually the third year we’ve hosted a Bulgarian film in our festival. Although we haven’t been very successful reaching out to other communities from Europe that were affected by this history first-hand, we will persevere in our collaborative approach. For me, this difficulty shows that we have been carrying the Berlin Wall in our hearts, even in the U.S. This is precisely why we need to talk about it and take it down again and again, until there is no mental trace of it.

At the same time, wonderful partnerships have happened this year because of the general interest of this theme, such as the support for three Romanian-French co-productions from the Alliance Française of Seattle, or our collaboration with UiPath Foundation. After the social documentary Toto and His Sisters, the festival will host a special debate with UiPath Foundation guests and representatives on the importance of film, art, and

education in dismantling the invisible barriers of our societies. At the suggestion of our PR Team – Smarthouse Creative – we wanted to create a festival that brings not only great independent cinema to Seattle, but also new experiences and people with different professional backgrounds.

By the same token, another special event linked to the festival theme was a lecture with Georgetown professor Dennis Deletant, who experienced the Romanian Revolution and the fall of communism in 1989 as a BBC reporter. We were very happy to collaborate with Ellison Center at UW for this event, as part of a larger series of conferences on the Berlin Wall. Last but not least, for the Romanian-speaking community, the film festival will continue on November 18 at Kirkland Performance Center, with a special one-man show entitled “Freak Show” featuring actor and writer Florin Piersic Jr, whose brilliant performance in “Comrade Detective” (an Amazon parody of a non-existent 1980’s Romanian police show) was also an inspiration for the festival theme.

As you can see, this year we have a much more varied program and many more logistic details and partnerships to navigate. This complexity shows in fact that the festival theme speaks dialogically across professions, generations and cultural backgrounds. We managed to use the symbolism of the Berlin Wall against itself in order to celebrate inclusion, collaboration and freedom of expression.

What are your favorite films that are part of your festival?

This is a tough question, because all the films are my favorite this year. But I’ll name three that come to mind, with the mention that the others are just as great and important to watch:

The Whistlers, Corneliu Porumboiu’s latest film and Romania’s pick for the 2020 Oscars; The Ukrainian-Romanian co-production; Donbass, because it talks about present-day Ukraine and Russian politics (another concrete example that the Berlin Wall has not fallen completely), and The Escape with Florin Piersic Jr, because it is preceded by an amazing short by Bogdan Muresanu – The Christmas Gift (nominated for the Oscars as well) and because I love Florin’s amazing performance as a Securitate detective.

What are some of the films you want people to see that might not be getting the attention that the opening and closing night films get?

I would like to recommend Mona Nicoară’s documentary The Distance Between Me and Me, because documentaries in general do not get the same attention at a film festival and this is a film that deserves a large audience. The director will be present at the Q&A, and she is an amazing speaker with an incredible career in human rights activism, making and teaching film, writing, and literature at Columbia, New York University, and Rutgers. The film deals with the fascinating life of a Romanian poet, Nina Cassian, an exile in New York. Nina’s passion and story of uprootedness will speak to the audience at a very deep emotional level.

The second film that I would like to point out is Tudor Giurgiu’s Parking, a love story between a Romanian writer who works in a parking lot in Spain, and a beautiful local singer. One might think this topic is not linked to the festival theme, but it does address social class barriers within Europe in the aftermath of the fall of the Berlin Wall, when Eastern Europeans found themselves in a subaltern position. In general, love does not come easily to expats and many viewers will connect with this beautiful classical romance and appreciate its subtle political undertones about workers’ rights in the European Union.

A similar issue is brought to the surface by the collection of shorts “Moldovan Stories,” more precisely in “One More, One Less” by director Ion Borsh. This debut film deals with the lack of economic and political agency in what used to be a region of the Soviet Republic and Romanian territory before WWII. Also it’s very rare to see films from the Republic of Moldova and the audience will have the opportunity to interact with the director at the Q&A session, which will add to the authenticity of the experience.

What would you like people to know about Romanian film in general, or specifically?

I would like people to know that the international acclaim Romanian cinema has received in the past decade can be an inspirational story for all cultures that face economic and social marginalization. After the Fall of the Berlin Wall, when Romanians were finally free to express themselves outside State control and censorship, they turned the scarcity of funds and opportunities into an assent, creating an original aesthetic of simplicity and surgical precision of expression, generally referred to as New Romanian Cinema or earlier on, the Romanian New Wave. Such masterful results with so little resources should be a lesson to all filmmakers struggling in this industry in the US. In fact, we can all learn from this form of minimalism.

Can you talk a little about what work the American Romanian Cultural Center does year round, outside of programming this festival?

ARCS also sponsors Romanian films at the annual Seattle International Film Festival. Starting with 2020, we would like to have regular screenings throughout the year at SIFF and Northwest Film Forum, not only of Romanian, but also of other Eastern European films. Besides film-related events, we organize cultural events, including exhibits with visual artists of Romanian and Eastern European heritage, artistic performances, concerts, book signings and lectures.

Most of all, we are interested in developing partnerships and programs with local, national, Romanian, and other European institutions that share our values. Last year we started the first secular school in the U.S. for children of Romanian descent. This is a big accomplishment for our community and we plan to do more advocacy work for heritage education with other local and national communities.

What else would you like people to know about the Romanian Film Festival or the state of film in Romania or the work you do?

I would like people to get their calendars ready for 2020 because we have amazing events and partnerships coming up, besides the annual film festival in November. We would like them to hear “Romanian” as a buzz word for great art, film, and cultural programs open to everyone in the Seattle-area.