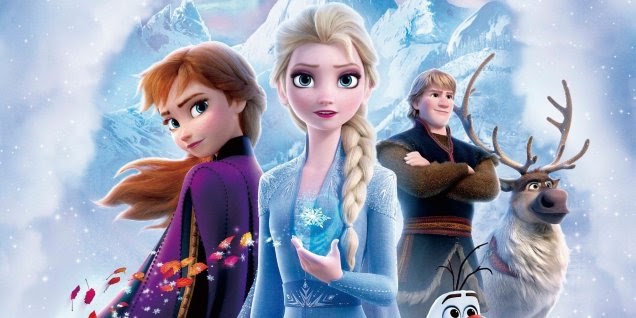 According to Lester Dent’s formula for writing pulp, the first three rules are: “hit your hero with a heap of trouble; Part two, double it. Part three, put him (or her) in so much trouble there’s no way he (or she) could ever possibly get out of it.” Boy oh boy is there a heap of trouble thrown at Queen Elsa when she awakens the Enchanted Forest and leaves Arendelle to undo generations of disharmony her family might be responsible for. And it only exponentially gets more perilous as the story evolves.

Before I get too far afield, I should not read too much into that before I call Princess Anna a femme fatale, or something irresponsible like that, for how she torments her suitor by always seeming to be looking away every time Kristoff tries to propose. Plus, the major double-cross came in the first Frozen movie with Prince Hans, certainly some kids’ first exposure to a genuine sociopath.

But with this new Frozen movie returns to Arendelle with the usual suspects: Elsa and Anna, Kristoff and his lovable horse Sven, and precocious snowman Olaf, who now talks like a Philosophy 101 student pondering the meaning of life and the memory of water. He also has a new permafrost so he won’t melt when he’s near any form of warmth.

Not to say any of this is bad, and far from it. Frozen 2 is absolutely delightful. It’s a sweet and endearing and fast-paced and fun and funny movie. It kept a lot of the charm in what made the first Frozen movie so enjoyable. There are a few changes, like how Evan Rachel Wood and Alfred Molina now voice Anna and Elsa’s parents and Elsa now has better control over her ice-throwing powers and uses them with more benevolence than she did in the first installment.

I’m not sure that I heard a song that will be as ubiquitous as “Let It Go” or “Do You Want to Build a Snowman?” but the market – and children – will determine that, I suppose.

I know the Frozen franchise is very lucrative for Disney and the first movie generated gazillions and bazillions of dollars for the entertainment behemoth. Moreover, there is little reason to expect the sequel won’t force Scrooge McDuck to invest in a bigger pool to swim in his oodles of cash. And maybe that’s a good thing, because the steps ESPN personalities are taking to promoting the recently-launched Disney+ streaming service are embarrassing.