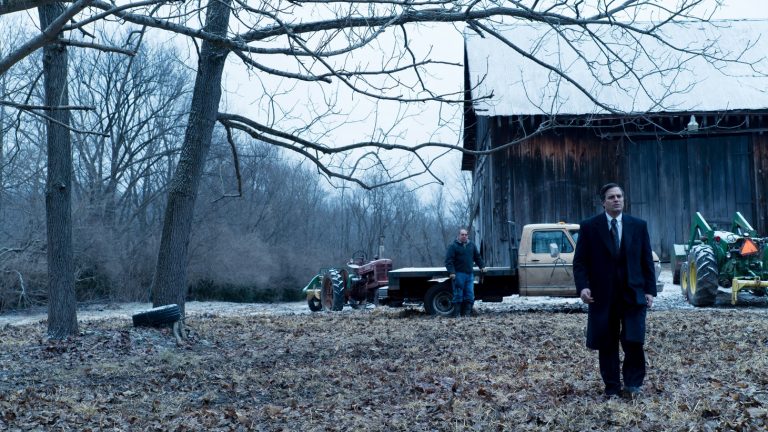 Todd Haynes has a rich history of finding the often-ignored stories while working in the conventions of genre filmmaking. Far From Heaven adopts the look of a Douglas Sirk melodrama to explore race, class, and sexuality; a chilly holiday film bursts open with lesbian romance in Carol; Velvet Goldmine, Superstar, and I’m Not There upend the rock doc with fractured narrators, dolls, and a half dozen actors portraying Bob Dylan across the eras; Wonderstruck links the stories of two deaf children across decades in stories split into era-specific black & white silent film and sweltering 70s New York thrillers. With Dark Waters he adapts Nathaniel Rich’s profile of Rob Bilott, “The Lawyer Who Became DuPont’s Worst Nightmare” with the look and feel of a conspiratorial investigation docudrama. Here, the style matches the substance. The open with direct evidence of corporate pollution as some kids sneak through a fence for some illicit nightswimming. Their boisterous dive into the  waters are shot like a horror movie and it’s only after they’re chased off by some goons in a boat spraying the surface of the waters downstream from a factory that we can infer the reason for the high security.

The rest of the movie follows Mark Ruffalo as a corporate attorney who’s recently become a partner at a big Cincinnati firm. Ruffalo doesn’t exactly disappear into the role — he’s an actor who shows his work: the squashed neutral accent, baggy midwestern suits, a sense of trying to disappear his rural past and modest law school behind a facade of due diligence. When a desperate family friend shows up in his law offices with a box of videotapes, evidence, and a crazy story he barely gives him the time of day. It isn’t until a nagging conscience sends him on a visit to the rural West Virginia where he spent some of his childhood changes his mind. There, he sees firsthand the gruesome sight of a field of dead livestock, a freezer full of mutated animal parts, a cow that conveniently turns rabid in the midst of his visit, and an entire town under the economic thrall of Dow Chemical. Although he initially imagines that questions about the environmental impact can be answered with a friendly inquiry to a colleague, the scope of the case grows wider, deeper, and contentious until it consumes him entirely, compromising his family, career, and health.

If there’s a twist on the convention, it’s perhaps the relentlessness to which this never seems fun. I don’t think Ruffalo smiles once in the film. Often, in these kinds of movies, somewhere in the dark storerooms, dusty file boxes, and meetings with victims, there’s a thrill of a discovery or an impassioned speech that lays out the wrongdoing in convincing and satisfying fashion. Here, though, in a story that spans more than a decade, it’s a Narnia-like Always Winter set in hermetic homes, stuffy holiday parties, and beige offices that just have the look of being constantly overheated contrasted with visits to the country where the ground never seems to have thawed.

The few compelling speeches are restrained and taken up by the supporting cast. Tim Robbins as the head of the law firm and Bill Camp as the suffering dairy farmer who instigates the case are particularly good. Anne Hathaway is mysteriously stuck playing an inexplicably underdeveloped wife (herself a lawyer, staying-at-home to care for the kids) whose primary function in the movie is mark the passage of time via changing era-appropriate hairstyles while concernedly cuddling children or pets in domestic settings. She and Ford v Ferrari’s Caitriona Balfe could start a worried wives club.

The years tick away via onscreen titles, aging children, and Ruffalo’s degree of deflation. The case accumulates increasingly outrageous evidence of malfeasance, an eventual courtroom victory is immediately deflated by corporate deflection and scientific delay. The story and the revelations conveyed here are striking (some people in the screening gasped audibly at some turns in the case), but even the even more pressing message of the film is just how hard it is to do this important work, how much of a toll it takes on the people who take on these challenges, and how no amount of legal success can really compensate for the damages caused by indifferent greed. Any satisfaction, such that it can exist, comes in the form of a written on-screen epilogue. It’s not exactly a thrilling way to spend your holiday moviegoing, but is nevertheless a worthwhile and well-executed watch that’ll play to the MSNBC moms and dads in the crowd. ☆☆☆