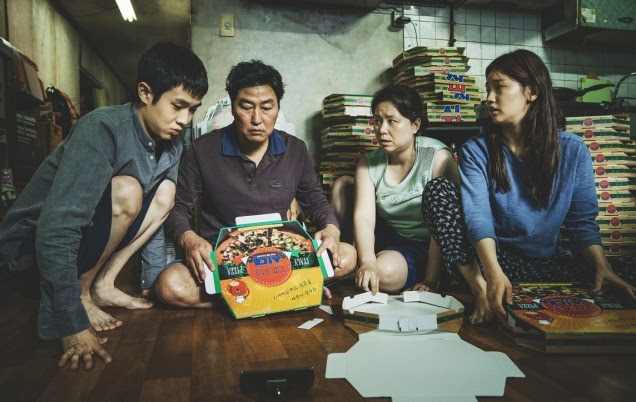 I saw Parasite at Telluride this summer and was blown-away by the uproariously entertaining caper in which a broke family ascends from a squalid semi-basement apartment to infiltrate a wealthy household’s lives. Aside from being a lot of fun, it’s also a whip-smart social commentary: what goes up must come down, in riotous fashion. Now that it’s made its way into wide release across the country, the SunBreak’s film team just had to do a virtual get-together to talk about one of the year’s best movies.

Chris: I’m so glad we could convene this roundtable and get everyone involved! To set the table, a mostly-spoiler-free recap: Parasite, the newest movie from Korean filmmaker Bong Joon-ho, concerns a poor family in South Korea, the Kims, who catch on to an inventive grift where they conspire to get hired by an affluent, but naive, wealthy family, the Parks. First, it’s son Kim (Choi Woo-shik) who is asked by his cousin to takeover tutoring the teenage daughter on her English while he’s away. This, itself, is a con because he has a crush on his pupil and wants to install a substitute who won’t be a rival for her affections while he’s out of the country. Kim is quickly able to convince the Park family to hire his sister as an art teacher, father as a driver, and mother as housekeeper.

Josh: The true achievement of the film may be how the Kim family is objectively awful, yet I still kind of love them for most of the story? Their schemes start out feeling incredibly clever and largely victimless, insomuch as the Park family has so much money and so little common sense. As they increasingly escalate the degree of grift and deception, though, I found my loyalties tested in amusing and challenging ways. It’s a real testament to director Bong and his incredible cast (Song Kang-ho, in particular, as the Kim family patriarch) is that both families remain fully realized and somewhat sympathetic.

Morgen: I’m with you Josh. I found myself, especially on reflection of the film a day or two or even a week later, liking the Kim family less and less. In the moment, I felt sympathy or even empathy for their situation especially since the their wrong-doings crept in. I didn’t see much wrong with the original “plan” but they stepped over the line at one point and that gross feeling in my gut started getting stronger and stronger.  It made the story so much richer (pun intended!)

Josh: The whole film was phenomenal, surprising, and inventive from start to finish, but I’m maybe most impressed with all of the details. Everything is constructed to be a perfect, exceptionally entertaining mousetrap, with clever conniving, callbacks, and suspenseful sequences. It’s a real achievement for something to be both so relentlessly fun while being so socially incisive.

Chris: When I saw Parasite at the Egyptian on a Saturday afternoon, I went by myself. This is one of the movies where I wish I hadn’t, because it’s one that you immediately want to discuss after. Or at least that was how it was for me.

Morgen: For a film like this, I definitely want to talk about it, but I also have to sit with for a little while (either a few hours or even a day or two) and then talk it out at length. I went alone as well and saw it in a very small intimate theater. I don’t know if this was better or worse but I definitely felt the intensity in the theater, almost like shared experience, with the rest of the 20-25 viewers.

Josh: I saw it way back over Labor Day weekend and it was a hit of the festival with patrons being turned away at the door. Bong Joon-ho even stuck around longer than expected to talk a bit about the making of the film, his inspiration (overhearing conversations in coffee shops), working on so many films with Song Kang-ho. He just seemed so personable and a fan of movies in general that it increased my affection for the film even further.

Morgen: This is a tough one. I’m going to say no. Even with the long run time, my attention was rapt from beginning to end. One of the frustrating aspects, but also what makes it so good, is you can’t really chat about any specifics in the story without possibly revealing important plot points.

Josh: I agree, it’s hard to find fault. A biting commentary could’ve been a real drag, but the outlandish plot elements and the family’s clever schemes and great escapes made the whole thing a hilarious and thrilling ride.

I’m a believer in the adage that good art can’t be spoiled by revelation of twists and endings, but accept that I’m on the outside of that argument. Nevertheless, it’s fair to say that there’s a whole extra twist to the plot that adds an extra dimension to the storyline, making the story richer, more complex, and ethically fraught. This has been playing for months, but I can see how it might be rude to call it out directly and get into specifics.

Is this totally going to sweep the Academy Awards?

Morgen: I don’t know. It has the potential in my mind to be in the running for many categories. It is incredibly complex with intricate details that end up meaning a lot throughout the film. While I think Joon-Ho didn’t miss a trick and pulled off an amazing feat, it’s rare for a complex and foreign language film to do all that well in the academy awards. I can’t imagine it won’t be in the running for foreign language film but we’ll see beyond that.

Josh: I’d love to see Bong pick up a directing or original screenplay nomination. The script is incredibly clever and there are so many thoughtful choices in the way the story comes together. You can tell he loves his characters and put the utmost care and creativity into telling a story that remains fun while socially incisive at every turn. If nothing else, the set design — from the squalid semi-basement apartment to the modern architectural marvel, all constructed to accomplish the specific needs of the film’s vision — is the definition of outstanding.

Chris: I think it might win Best International Film, and some other smaller awards, but after the Academy preferred The Green Book to Roma last year, I’m not sure that Hollywood is ready to reward a foreign-language film with its highest honor.

Josh: Yeah, it has to be a lock for Best International Film. It would also be Korea’s first nominated film, which is completely wild (Lee Chang-dong’s mesmerizing Burning didn’t make it past the shortlist last year. Watch it on Netflix if you missed it.).

And “thanks” for reminding me of Green Book’s win. I’ve tried to forget that for a whole year, but it’s always important to calibrate expectations and limit emotional investment in the decisions of an Academy that’s still largely older, whiter, and richer than we’d like it to be.

What are aspects of the film, without giving too much away, that really grabbed you?

Morgen: Having seen a few of Joon-Ho’s other films (ex. Snowpiercer and The Host), it’s not surprising how much symbolism is spread throughout. It’s not the kind of metaphors you miss unless you’re really paying attention, he sort of reveals it slowly over the expanse of the film so you come to the realization yourself. If you’ve ever watched a film where there was a big reveal (or even a subtle psychological one) where you discovered it yourself instead of having it pointed out by someone else, you know how powerful that can be. This film had so many moments like that and it was masterful.

Josh: There’s a sequence where the Kim family is fleeing the Park mansion, literally descending through the socioeconomic strata of Seoul, neighborhood by neighborhood, through a torrential rainstorm, and into the flooded streets of their lower-class neighborhood. The whole thing is masterful, and, like totally metaphorical.

Chris: Yes! I thought the same thing, Josh. I also really enjoyed how Bong was able to interject humor into the misfortune of what the Kim family was experiencing, but the whole thing made you a little uncomfortable for wanting to laugh because the class politics were so pronounced. It’s in a similar way, I thought, to Joker, but much more successfully here.

Josh: I had infinitely more fun with Parasite than Joker, but we’ve hashed that out a few times by now! If people haven’t seen it yet, it feels like this has a unanimous recommendation from all of us: I know I’m hoping to revisit it while it’s still in theaters. There are a lot of options vying for attention over the holidays, but if you have an even slightly adventurous family, this could be one to shake up the usual filmgoing routine and will give you something to talk about over the rest of the long weekend.