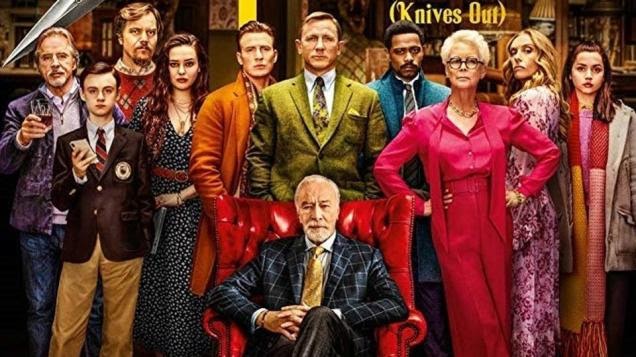 For his eighty-fifth birthday, legendary mystery writer Harlan Thrombey used the occasion of a huge birthday party to tell his failchildren and failgrandchildren they will be cut out of his will. Someone in the aging Thrombey manor will kill Harlan (Christopher Plummer) before the party is over. Or maybe he’ll kill himself. Either way, he’s dead and everyone is a suspect. That’s the basic plot to Rian Johnson’s new whodunit Knives Out. It plays like how an old Agatha Christie novel reads, and it’s great fun.

Daniel Craig leads the all-star cast as the Poirovian detective Benoit Blanc, who is brought in to investigate the death of Harlan, though he’s unsure of who’s paying him. Jamie Lee Curtis, Toni Collette, and Michael Shannon all play the Thrombey children, and Curtis’ Linda Dysdale is the most tolerable, though she has the annoying habit of presenting herself as a self-made woman while glossing over how her father loaned her the money to start her business. It’s very Trump-like. Her husband Richard (Don Johnson) has some passionate (but predictable) opinions about legal vs. illegal immigration. Michael Shannon’s Walt publishes his father’s books when they’re completed, but everyone thinks he’s lazy because he does nothing else. Toni Collette is Joni, actually a widowed daughter-in-law who’s actually a wannabe Instagram influencer living off her daughter’s mistakenly doubly-deposited tuition money. They’re all uniquely terrible, but the grandchildren are even worse. They include Jacob, a full-blown Nazi internet troll, and Hugh (“Ransom” to everyone but the help), a douchebag played by Chris Evans. They all suck, and they’re all dependent on Harlan’s money.

And then there’s Marta, Harlan’s nurse (Ana de Armas). She administers Harlan’s medicine and plays board games with him. In a family full of grifters and assholes, she’s the one person Harlan doesn’t hate.

I don’t want to add any more to describing the plot because it’ll spoil how the story develops and what happens. Rian Johnson, who was recently directing episode eight of the Wars of Stars series, clearly knows how to tell a story. The pacing is precise and builds suspense as the story progresses. There are no boring parts. Part of what I loved about watching this movie was that you’re rewarded for both passively watching the film and watching it play out, or by trying to follow along and figure out the mystery before the big reveal.

Knives Out is mostly apolitical, though there are a lot of characters whose ideology is intertwined with their identity, and a little of that felt forced (like putting a “woke” granddaughter and alt-right troll grandson under the same roof). Plus there’s the whole “rich people are terrible” thing (which everyone knows, they are). It’s the type of escapist fun that is easy for everyone to enjoy. And it has the added bonus of telling you, no matter how terrible you might think your family is, they could always be worse.