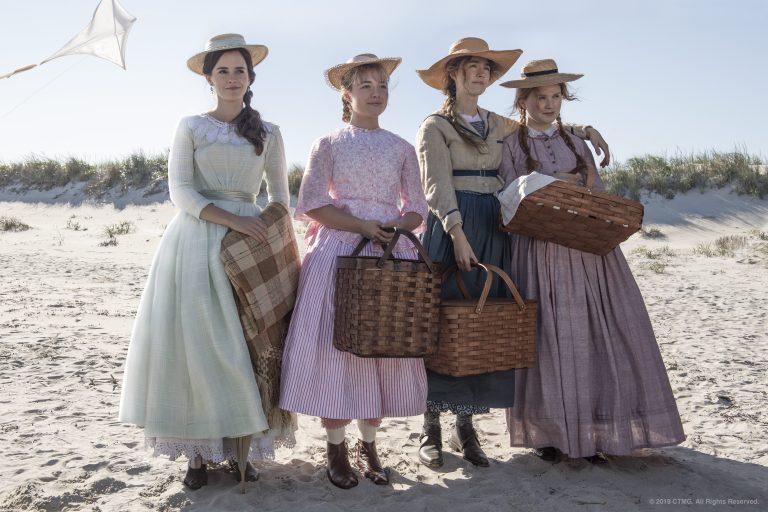 Greta Gerwig made her solo directorial debut with Lady Bird, one of the decade’s finest, a highly personal, semi-autobiographical story starring Saoirse Ronan as a young woman finding her identity in late-century Sacramento. This Christmas, with Little Women, she brings us a modern take on a centuries-old classic, also starring Saorise Ronan as a young woman finding her voice as an artist. I hope that these two continue to make movies together forever.

Louisa May Alcott’s story of four sisters growing up during the Civil War, living in “genteel poverty” has been the subject of many adaptations for television, stage, and screen. I’m a bit embarrassed to say that I never read the book and barely remember the 1994 film adaptation. I adored Gerwig’s treatment of the story, but feel hobbled in my ability to fully contextualize and admire all the choices she made in bringining her own generous and humane sensibilities to the project while honoring the spirit of a long-revered text. For me, it worked beautifully, but I’ll be curious to hear responses from those who grew up with the novel as a sacred (or at least pageworn) text.

Chief among her assets is ability to convene an unassailable company of Millennial A-listers for her cast. As the film opens in the approximate “present” tense: we meet an ink-stained Jo March (Saorise Ronan, ever a triumph of range and restraint) selling a story in a New York City publishing office to a cranky mutton-chopped Tracy Letts (what a gift!). Her celebratory run through the streets of the city back to the boarding house where she’s been living, working as a governess by day and writing short stories at night to earn money for her family, establishes the crackles of joy that flow through the rest of the film. It’s been rightly compared to Gerwig’s own iconic sprint in Frances Ha, with which it shares a big mood. Elsewhere, her older sister Meg (Emma Watson) has settled into married life, bemoaning the indignities of being poor, and impulse shopping for fabric to make herself a fancy new dress even though it throws the domestic budget into turmoil. We get a glimpse of Beth (Eliza Scanlen), sickly and home alone playing her beloved piano before hopping across the pond where Amy (Florence Pugh, having a hell of a year) is in Paris honing her painting skills, riding around in carriages with their elderly opinionated aunt (Meryl Streep in her best Dowager Countess), courting a wealthy suitor, and happening upon their roustabout neighbor Teddy Laurie (Timothée Chalamet, devilishly charming and an adept physical comedian to boot). The existence of the obscenely wealthy spinster aunt alongside a struggling family is possibly less explored here than it ought to be, perhaps because it would over complicate the plot.

Abandoning a strict linear chronology, her version weaves together episodes from their present as young women (geographically scattered) and their childhood in Concord, seven years earlier, living together under one roof with their charity-obsessed mother (Laura Dern, a study in beatific optimism in the face of grim reality) while their absent father works as a pastor for troops in the Civil War.  Beth’s worsening illness sets the story in motion, bringing Jo back home where recollections of cherished March family memories unfold: the girls staging Jo’s plays for neighborhood kids, holiday charity and warm family gatherings, the burgeoning relationship with the rich neighbors across the field, and going to (or being excluded from) parties to dance with marriage prospects. With this structure, the culminating episodes of childhood betrayals, tragic deaths, frustratingly-failed failed proposals are more deeply moving as key themes, triumphs, and tragedies echo across the years. The film is shot gorgeously indoors and out, with subtle cues indicating for time periods by degree of golden hued light. Weaving this all together is no small task, and the results are astonishingly coherent and convincing.

Ultimately, the somewhat modern heart of this particular telling of Little Women are the intertwined story of Jo’s self-actualization and success as a writer. We trace this journey from her joyful childhood theater productions to compromises as a pulpy newspaper serials  all the way through her invention of a new kind of literature. A smidge of meta-textual blurring finds Jo explicitly serving as Louisa May Alcott’s stand-in who reckons with the loneliness of an artistic life, directly acknowledges the economic nature of marriage, and negotiates these concessions in real life and on the page. [Spoilers for a two-hundred-year-old book —>] Ronan’s portrayal of determined devotion while caring for dying Beth, heartstruck disbelief as Meg abandons acting for a domestic life, and tortured rejection of her best friend’s dramatic hillside marriage proposal makes the soaring culmination montage of her production of the novel, page by handwritten page, in her family attic all the more affecting . A sly acknowledgment while shrewdly bargaining with the terms of publication winks at a fantasy romantic ending, or at least puts that on equal heartwarming territory as witnessing a book’s printing from start to finish in loving detail.

The cast is utterly delightful and their obvious love for the material and for each other is evident. Every moment sparkles. Florence Pugh is a standout as Amy, bridging girlish longings to the concessions of adulthood with a stunning monologue in the middle of the film. Still, if I have any complaint it is that despite Gerwig’s clear effort to establish the eventual Amy-Laurie pairing, Ronan and Chalamet have such irresistibly endearing onscreen camaraderie, it is impossible not to heartbroken when those kids just can’t make it work and furious when her sister returns surprisingly betrothed. If you have even a passing familiarity with the book, you know it’s coming and is correct, but to everyone’s immense credit these moments still wound deeply. (I suppose if anything in this world can justify a Chalamet rejection, it’s a blunt professor played with aloof appeal by Louis Garrel.) I can see why the studio held onto this until the very end of the year. After a tumultuous season, it is a complete gift. ☆☆☆☆½