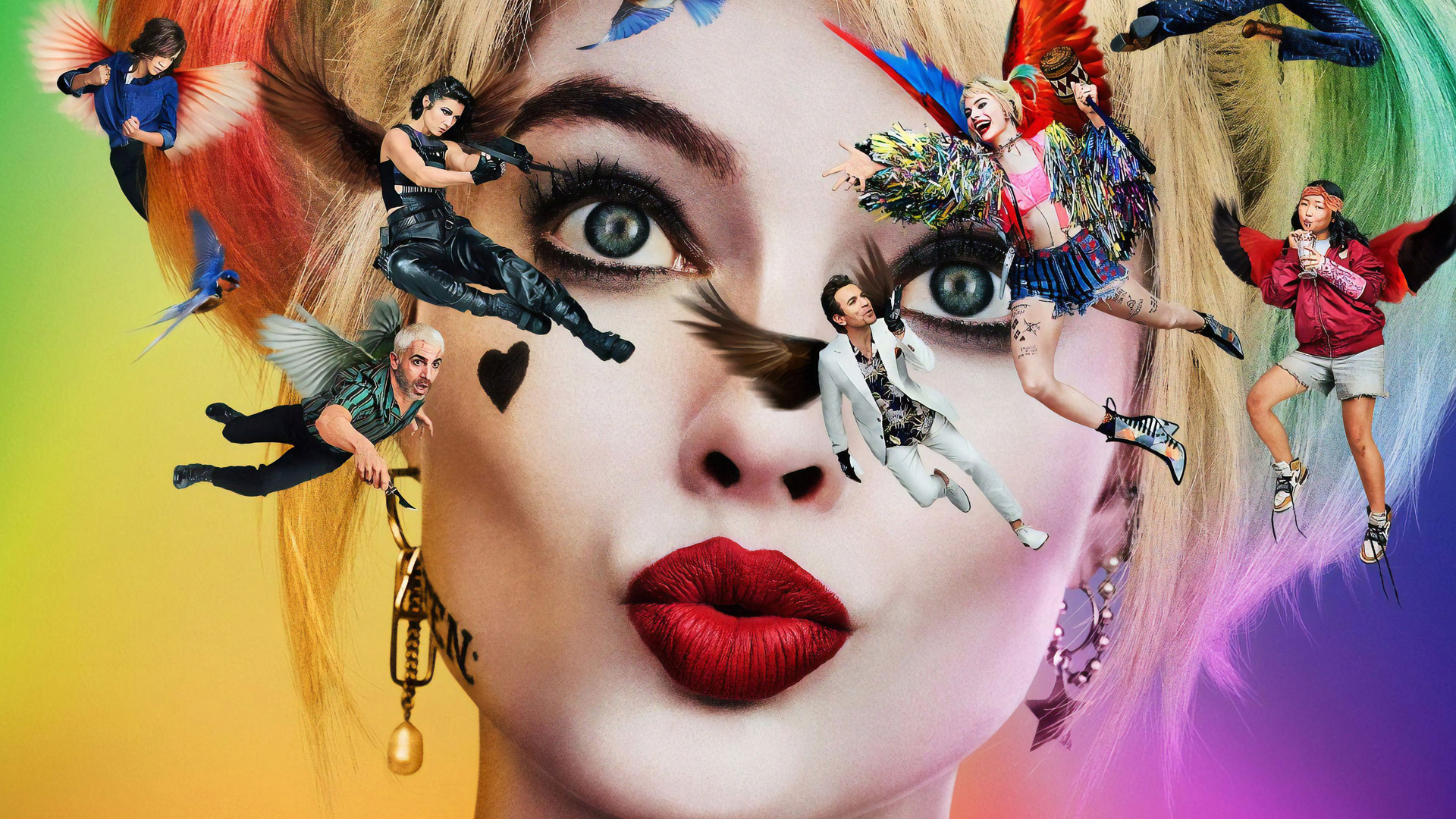 Birds of Prey and the Fantabulous Emancipation of One Harley Quinn (or Harley Quinn: Birds of Prey if you’re a desperate studio executive) wallops the DC Comic Book Movie Formula squarely in the chops with an animated mallet and an impish twinkle.  Even more than the majority of its DC-grown predecessors, it’s a (mostly) live-action cartoon—a candy-coated offshoot of a Ralph Bakshi universe, written and directed by feminists. It’s also the best film of the DC Extended Universe v.1 this side of Wonder Woman.

I’ll be honest: the reason I’m writing about this movie, even after my esteemed colleague Josh has already reviewed it, and almost a week after it opened, is that it’s being branded a flop after a rather modest (by blockbuster standards) $33 million opening-weekend gross. And I think it deserves better.

It’s natural, I guess, to speculate as to why the movie’s struggling to find an audience. The lingering stigma of Suicide Squad, the Harley Quinn character’s first feature film, has likely imprinted itself on this followup. And the marketing may be a little too esoteric, downplaying the abundant action scenes and focusing on mood and style (see embedded trailer above).

That marketing may have left the impression that Birds of Prey is neither fish nor fowl: Too odd for mainstream audiences who want comfy formula linearity, yet too senses-overloaded and action-heavy for more discerning cinephiles. That’s a shame, because there’s a lot for both of those demographics to love, if they give it a look.

The movie wisely takes Margot Robbie’s manic Harley Quinn (the one universally-loved element in the otherwise mediocre Suicide Squad), then puts her at the center of her own vehicle. A mentally unhinged career supervillain, Harley’s navigating a breakup with her super-villainous crime boss boyfriend, The Joker, and the journey of self-discovery that’s accompanying it. As if kicking around a broken heart isn’t enough, word gets out that her love affair with Mr. J is kaput, and the myriad Gotham City crooks she’s wronged during her criminal career are out for blood.

Those rivals get even more incentive to take Harley out when she rescues Cassandra Cain (Ella Jay Basco), a street kid who’s lifted a diamond belonging to Roman Sionis (Ewan McGregor), AKA crime boss/supervillain Black Mask. Cassandra and Harley are marked for apprehension and death, respectively.

Along the way, three other women figure into the mayhem: Helena Bertinelli (Mary Elizabeth Winstead), the daughter of a dead mafia kingpin who’s now fighting crime as Huntress; Dinah Prince (Jurnee Smollett-Bell), a singer at Roman’s nightclub who becomes the superhero Black Canary; and Renee Montoya (Rosie Perez), a tough police detective trying to build a case against Sionis.

Birds of Prey does invite comparisons to Marvel’s Deadpool, what with its wisecracking third-wall-breaking anti-hero(ine), a streak of black humor, and enough bloody mayhem to earn an R rating. But director Cathy Yan’s sophomore feature (after her Sundance Award-winning 2018 debut, Dead Pigs) stakes out its own identity from the get-go.

In case you’re wondering, neither Batman nor The Joker appear in Birds of Prey: Most of the major characters are female, and Margot Robbie’s Harley Quinn takes the spotlight for much of the movie. She’s sublime, motormouth-riffing about the action as her narration bounces the chronology back and forth like a Superball.

In the grand tradition of Bugs Bunny and (yes) Deadpool, she’s also a cartoon everywomxn with a penchant for thumbing her nose at–and violently pranking–her adversaries. Through it all, Robbie’s physicality, comic timing, and expressive face are their own special effects, as integral (and entertaining) as any of the dazzling chases, fights, or explosions on display.

Harley’s sugar-stoked kid in super-villainess clothing finds an ideal enabler in Birds of Prey’s director. Yan undeniably delivers the expected bang for your buck in the action scenes and then some, often augmenting things with visual cues taken from a dizzying array of sources. There’s an awful lot of peak Jackie Chan in the way Harley often uses found objects as impromptu weapons, and I’m almost surprised that Robbie doesn’t drawl, “What’s Up Doc?” during her animated origin story.

Yan is crazy in love with cinema, so she pulls out an arsenal of aesthetic and stylistic influences with a sense of enthusiasm that’s (for me, at least) infectious. You can see it in the attention and care she’s put into giving every leading character their own distinctive visual signature.

Huntress’s backstory is shot in organic hues a la The Godfather, while her battles are shot with stylized Luc Besson sleekness. Black Canary gets a smoldering, stylized musical number straight out of a Jean-Pierre Melville gangster flick before getting hurtled into the mayhem. When Montoya’s the focus, things become as bright and functional as a Sidney Lumet crime drama.

Ewan McGregor’s gloriously loose-cannon sadist Roman Sionis, conversely, has a penchant for graphically peeling faces off victims that comes squarely from the ’70 grindhouse, and the character’s first time donning his mask is filmed and scored like something out of a lost Mad Max sequel.

Yan’s film literacy goes well beyond the characters’ introductions. Throughout Birds of Prey, Yan and her cinematographer Matthew Libatique hurtle in visual cues that touch on everything from Seijun Suzuki‘s Tokyo Drifter, to John Woo‘s balletic gunplay, to Mario Bava‘s loud primary color palette, to a wicked Marilyn Monroe parody. They may be working within the panels of a proverbial comic book, but Yan and Libatique experiment a lot within those confines, all while still delivering action sequences as kinetic and adrenaline-stoked as anything currently roaring its way into multiplexes.

As exhilarating and engaging as Birds of Prey is, it’s not perfect by any stretch. The movie does a great job of establishing the chemistry between our heroes through action and visual storytelling, and it embraces new-wave feminism and female bonding with affectionate rapid-fire humor. But it undercuts that goodwill some when Christina Hodson’s otherwise clever script hits the girl-power cheerleading on the nose a little too hard.

The Birds are also a uniformly appealing and cool team of heroes (welcome back, Rosie Perez!), but they’re inevitably upstaged whenever Harley tears across the screen. Your mileage regarding the movie’s hyperactive enthusiasm may vary wildly, too (as Josh can attest).

That said, the above mild grumblings are outweighed in the context of a lot of things that really work. When it clicks (which is most of the time, from where I’m sitting), Birds of Prey is a blast of a comic-book movie. It also delivers a comedic punch to Patriarchy’s kisser, and turbocharges its influences with the knockabout artistry of a great hip-hop record. Or, more appropriately, a classic Looney Tunes short. Sisters are doing it for themselves, Doc.