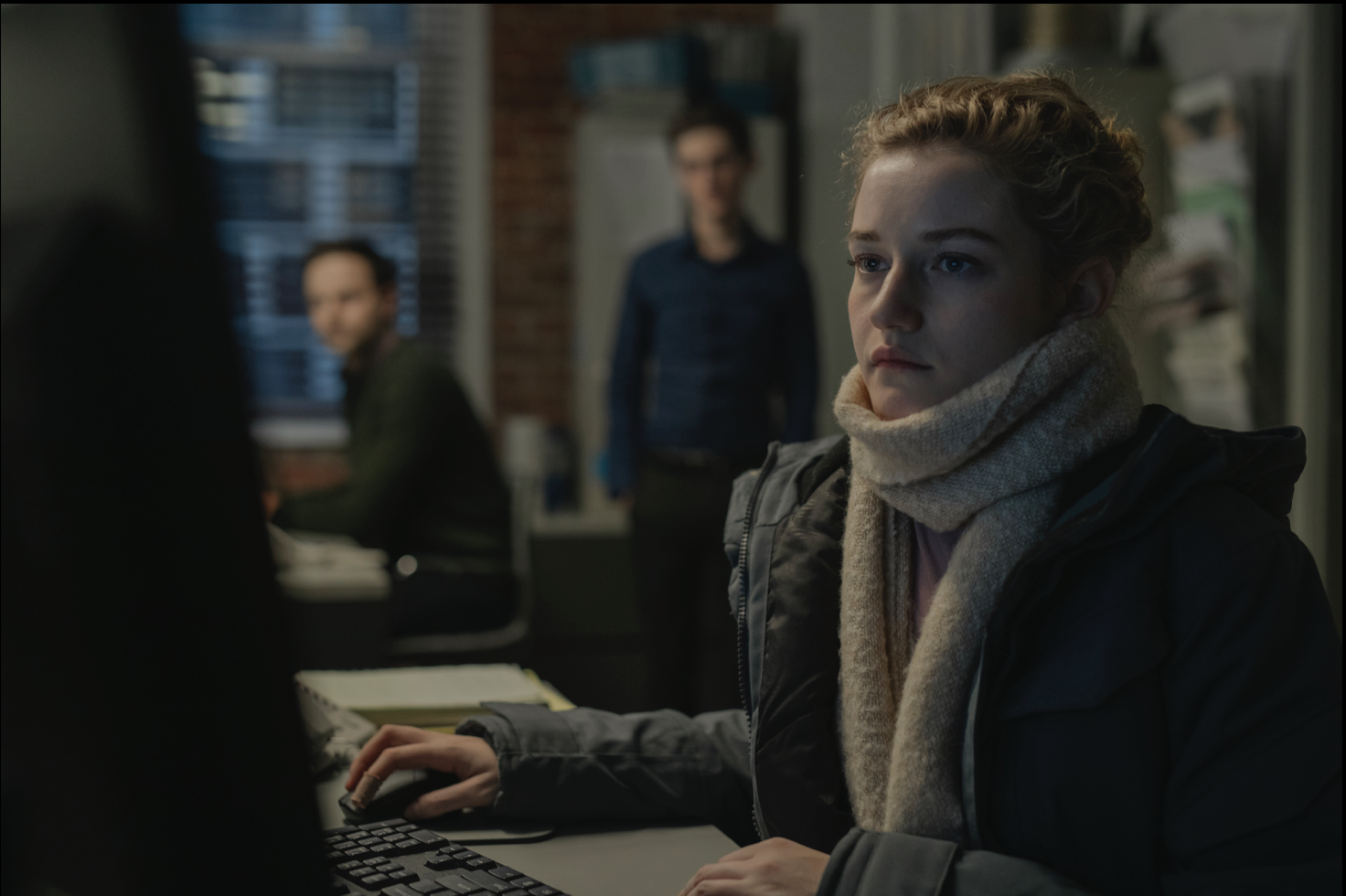 We meet the titular assistant, portrayed with quiet reserve by Julia Garner, before the sun even rises. She emerges, bundled up for the weather, carrying an armful of binders, and sleepily settles into an Uber for the long pre-dawn ride from her Queens apartment into the heart of Manhattan, where she’s the first to arrive and the last to leave a downtown film production company. Her morning routine includes turning on the lights, starting the coffee, making copies of scripts, lining up the day’s agenda for the powerful executive who runs the place, and tidying up his office before he arrives. Seemingly normal tasks, until we see her collecting stray jewelry off the floor and on her knees, scrubbing a stain from a couch that others will later joke about never sitting on.

Garner’s character is positioned just outside the mostly unseen executive’s office, in the inner sanctum of a buzzing corporate office where she manages access to his time, negotiates last-minute overnight flights for a film screening, fields frantic phone calls from his angry wife, and catches verbal abuse from her boss when anything goes wrong. The studio’s clearly a boys club and she shares the antechamber with two ambitious guys who are so wrapped up in their own business that — aside from a few brief supportive gestures — they largely ignore her. Fresh out of college with dreams of moving up the hierarchy to produce movies herself, she’s dedicated to her work and it consumes her social and family life. It’s a stressful job that provides an uncomfortable and lonely vantage to atrocious behavior and the people who enable it.

The arrival of a very young new hire — a waitress who caught his eye at a mountain film festival — into the inner office incites the film’s primary dramatic tension. Garner recognizes her lack of qualifications, worries for her naïveté as she’s put up in a nice hotel after signing a stack of NDAs, and brings her serious, if ill-formed, concerns to the company’s HR department (Matthew McFayden). The ensuing conversation veers from supportive to scathing, a devastating illustration of widespread complicity in service of furthering careers and accumulating power.

And so, via this spare, day-in-the-life format, director Kitty Green delivers a closely observed #MeToo drama. She frames Garner tightly and never shows the (clearly Harvey Weinstein-inspired) executive; so the story plays out through the lens of reactions: to the parade of attractive actresses showing up for pitches, other executives scurrying for favor, frustrations from the rest of the team as he mysteriously disappears for long stretches of the day, slighting visiting producers and throwing the rest of the day into disarray. As night falls, the rest of the office empties out. The boys — not entirely irredeemable — halfheartedly invite Garner to meet them for drinks, but she sticks around to close the office, pack the executive’s bags for his flight, and witness the frustration of his colleagues as he delays them further.

The film closes with a sad diner muffin, a quick belated birthday call to a far away family proud of their daughter’s success in the big city, and the sense that the whole awful business will play out day after day. Presenting the widespread awareness of this executive’s awful behavior, the film is also an indictment of the degree to which the ambitious masses hover at the edges of a dark gravitational field, looking away from the black hole around which their success revolves. It’s a chilling story, but engagingly told, and a conversation worth having.