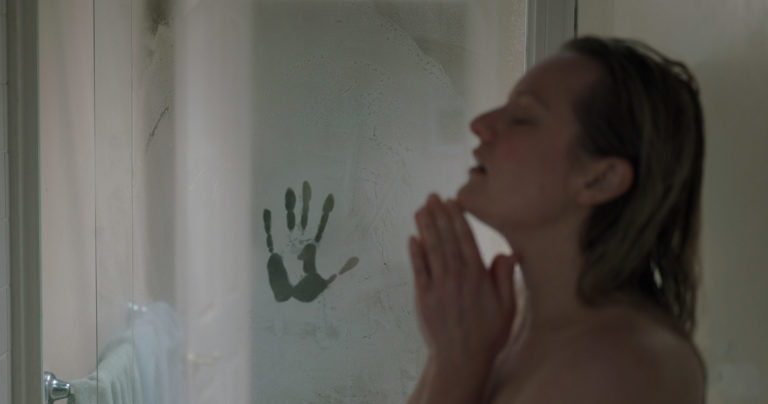 From the outset, you know that Cecilia (Elisabeth Moss) is in bed with a psychopath: in an isolated modern house perched atop a seaside cliff, we find her still awake, late at night in a glass-walled bedroom, curtains wide open. Great for views of the waves crashing against the rocky shore below, but insanely bad for anxiety and sleep quality. Smartly, though, she sneaks out of her boyfriend’s embrace, checks to see that the covert diazepam-cocktail left on his nightstand has taken its narcotic effect, tiptoes through their Tony Stark cosplay mansion with its copious security cameras and basement technology laboratory, grabs her Go Bag, laces up her trusty Nikes, and gets the F out, scaling the estate’s creepy border wall, scurrying through the surrounding forest, and awaiting her sister in a getaway car on a desolate road.

Leigh Whannell made his name as a writer/creator of the Saw and Insidious franchises, movies too scary for me, that I only loosely understand to be about good people tormented by insane schemers or aggrieved demons. Here, he turns a horror classic (once slated to be part of an ill-conceived Mummy Cinematic Universe!), into a modern story that confronts gaslighting and failure to believe women. Here, the the monster domestic abuse and forced childbirth and the victim is the protagonist. Its successes rests almost entirely on Elisabeth Moss’s incredible performance, the range of emotions she can convey, and the ferocity with they flicker across her deeply expressive face. (For more of this, in a more challenging, less sympathetic package, see last year’s exceptional Her Smell.)

We find her, two weeks later, cooped up with a police officer friend (Aldis Hodge) and his daughter (Storm Reid) in their Bay Area home, so deeply terrorized by her controlling relationship with a physically and emotionally abusive boyfriend that she barely dares to leave to walk even to the mailbox at the end of his driveway. Moss’s facility for conveying the unshakeable effects of this trauma are remarkable, and it isn’t until her she receives news of his death by apparent suicide, that she breathes a sigh of incredulous relief. Unburdened and surprisingly granted a multi-million dollar trust by her estranged “optics pioneer” boyfriend, she begins the tenuous process of putting her life back together. Until, of course, a series of increasingly strange events derail those plans.

Another filmmaker might have left more room for doubt about whether the odd occurrences — a minor kitchen fire here, some forgotten drawings there — were lingering effects of Cecelia’s years of abuse, leaving the audience to question whether the paranoia and bizarre behavior was all in her head. But in this film, there’s no doubt. It’s not a ghost or psychiatric disorder: she’s being tormented by a goddamned invisible man!

More suspenseful than scary, Whannel shoots the film in cool muted tones, confined much of the time to a modest fixer-upper home in the midst of renovations, with a minimal first half soundtrack punctuated occasionally by gritty loud bass intrusions to amp up the tension. The camerawork is in on the fun, stretching out spooky shots of apparently empty rooms, keeping the audience on edge as they try to spot hints of the hidden intruder. Clever camera angles and low-budget effects work wonders to escalate the tension and creepy developments. Eventually, as the disruptions mount and calls start coming from inside the house you get the sense that Cecelia is becoming the world’s worst houseguest, sticking around far too long, and exposing her loyal friend and teenage daughter to unnecessary risk.

As Cecelia begins investigating in earnest, the level of harassment escalates sharply, to both isolate her further and strengthen her determination to prove her sanity and expose the man improbably tormenting her from beyond the grave. It’s hardly an airtight thriller, but if you’re willing to set aside accumulating inconsistencies, you can sit back and enjoy the Blumhouse of it all, complete with plot twists and violent set pieces. It’s not perfect, particularly as Cecelia’s struggle to be believed gives way to vengeance and veers toward a noisy formula finale. Nevertheless, the timely update is often a lot of fun and Moss’s relentless performance — conveying growing desperation, steely reserve, clever scheming, and even a Midsommar-worthy smile — is well worth the price of admission.