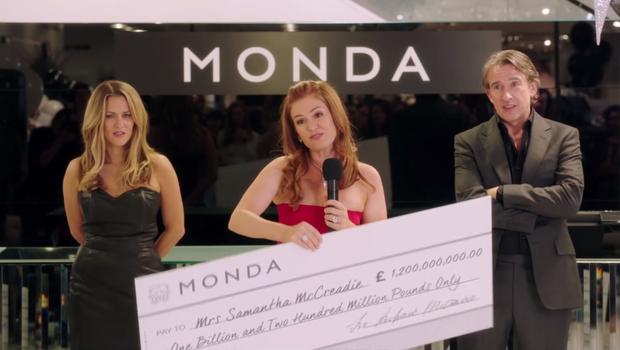 When your name is Richard McCreadie, and your net worth is somewhere in the 11-figure range, the nickname “Greedy” or “McGreedie” pretty much finds its way to you without any real effort, beyond being a huge asshole every waking moment. McCreadie is the central character of Michael Winterbottom’s new movie, Greed, and he’s played by Winterbottom’s most frequent collaborator, Steve Coogan. The movie is slow, but often funny, and has a very satisfying payoff.

McCreadie is a fashion mogul, billionaire many times over, and a complete piece of shit. He’s an amalgamation of Gordon Gekko, Donald Trump, and British rich guy Philip Green – reportedly much of McCreadie is based on Green. Greedy McCreadie and Greed serve as an indictment for “late capitalism.” McCreadie is a bully who sees himself as triumphant when he uses his considerable power to lower what he has to pay sweatshops for cheap clothing. There’s a very human cost for fast fashion, and that workers in Sri Lanka might literally work themselves to death is not something he would even allow to enter his mind. His teeth are also a color I can only describe as “neon white.”

The story of Greedy McCreadie’s rise to wealth and power is told largely through his hack biographer Nick (David Mitchell), who learns of what underhanded means he used to get rich while gathering research for his book, but his epiphany is late-coming. He even gets sweatshop workers to record a birthday message for McCreadie. Nick learns that McCreadie was able to get richer after all of his previous businesses went bankrupt, how he can make charitable contributions that are really tax-free wealth transfers to his ex-wife (Isla Fisher), and how he can buy companies with other people’s money – like a game of three-card monte with banks (which is also a game he is often playing throughout). Like The Big Short, Greed is a movie that explains how exploitative capitalism is, and how the rich got rich from using that exploitation for their benefit. The movie could appear dense if you’re not paying attention to the details.

The film is timed around McCreadie’s sixtieth birthday party, which he wants to be positively epic (if tacky, because rich people often have terrible taste, even those who made their billions in the fashion industry), but it turns out to be an epic catastrophe that would make the Fyre Festival seem like a well-oiled machine. He tries to get a host of famous performers to appear but no one bites and he is reduced to hiring a bunch of celebrity impersonators. Lots of invited a-list celebrities fall to show, though Stephen Fry does appear at the party as himself. There’s also the problem of the Syrian refugees that have taken temporary home on the public beach adjacent to the McCreadie compound.

The payoff is well worth slogging through the movie and without giving too much away, I’d just say that it’s a payoff Mike Bloomberg would very, very much disapprove of. (Lol.)