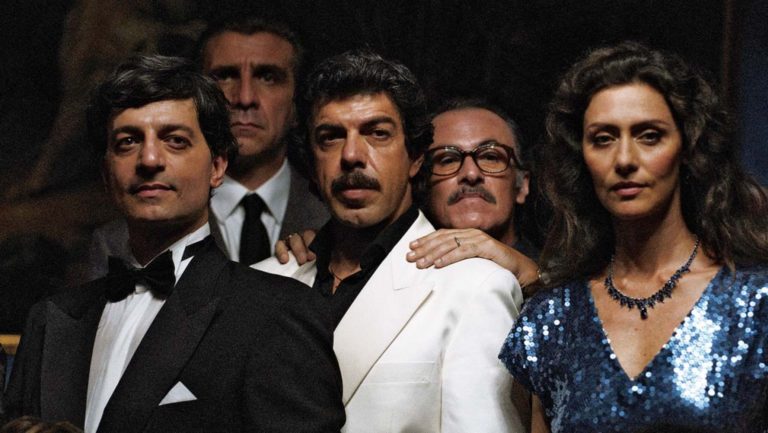 The new film from Italian filmmaker Marco Bellochio concerns the case of Tommaso Buscetta, a mafioso bigshot turned cooperating witness against his former compatriots in the Cosa Nostra organization. It’s another grand, mafia drama that spans many decades. It’s also very funny in some subtle ways.

Buscetta is played by Italian actor Pierfrancesco Favino, and it’s a riveting performance from a role that demanded such. Buscetta is, over the course of this long film, a powerful figure who can clear out an entire floor for conjugal visits when he’s imprisoned to a shell of his former self, unemployable and supported by his wife. When we first see him, he looks just like a man of importance in the 1980’s: he’s wearing a white suit, sunglasses indoors, and is sporting a bushy moustache and mullet. Called “The Boss of Two Worlds,” Buscetta was big in both Italy and Brazil, where he oversaw the heroin trade there. That was until he was arrested and tortured by Brazilian authorities and extradited back to Italy. While in Brazil, though, he only learned about family members and colleagues getting killed, powerless to do anything about it.

When he returns to Italy, he’s given a choice to either cooperate with Judge Falcone and name names, or to not, and spend the rest of his life at the mercy of the state. If Tommaso Buscetta were alive today (he died in 2000), hundreds of people would be tweeting rat emojis to him.

The bulk of the movie centers around the “Maxi Trial” (Maxiprocesso), where hundreds of mobsters were tried en mass (almost 500 total and over 100 tried in absentia). The trial is wild and it spans about six years, from 1986 to 1992. Buscetta is the star witness, and the judges allow other defendants to cross-examine him, when they’re not booing and hissing from their cells surrounding the courtroom. One figure on trial even suggests that smoking is beneficial to his health when told smoking was not allowed. I don’t know much about the Italian judicial system, but it’s a marvel to see how a courtroom that was so out of control in deference to hundreds of defendants would result in so many convictions.

After testifying against the Cosa Nostra, he takes up home in the US under witness protection. It’s where you see how far he’s fallen, including being embarrassed by a singing troubadour (and proud Sicillian) in a restaurant and noting that his wife has to work a job to support him.

It’s almost dizzying to see how fast Buscetta’s life imploded (I mean, it was over decades in a 2 ½ hour film), but it’s also a compelling and interesting life. In the end, Bellochio celebrates Buscetta’s life though I’m not certain it warranted such (my knowledge of the case is limited), but I did enjoy the movie immensely.

The visual style is particularly impressive, looking and feeling like it would be a movie straight out of the mid-1980’s, and the acting is impeccable, particularly from Pierfrancesco Favino.

I love the large, epic films about organized crime, like Casino, The Irishman, and Goodfellas on some days) and others not directed by Martin Scorsese (The Godfather and its first sequel), and this is a welcome addition to the canon.