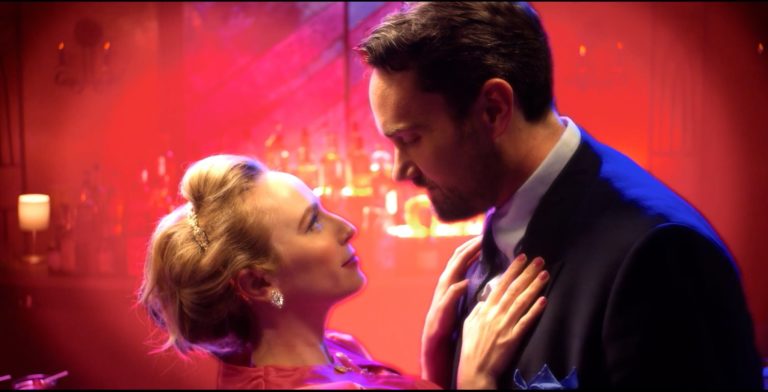 My favorite movie to play at the Seattle Children’s Film Festival so far has been the short film A Typical Fairytale. It’s a sweet, ten and a half minute film told as a fairy tale but with modern themes of acceptance, identity, and empathy.

The person most responsible for seeing this through completion was the film’s director, star, and producer (if that’s not a triple threat, I don’t know what is) Annette Reilly. Reilly is a Vancouver-based actor and filmmaker probably best known for playing Sabrina’s mom on the Netflix hit The Chilling Adventures of Sabrina.

I wanted to learn more about this film so I met up with Reilly about an hour before A Typical Fairytale screened at the Northwest Film Forum as part of the Children’s Film Festival.

I think I read that you fell in love with the script when you read it for the first time. Can you talk a little bit about how you discovered A Typical Fairytale?

Yes, I really did. I had met Jessica McLeod who’s the writer in an acting class like a year prior, and she came to me, I was away on vacation with some friends in a cabin and I got an e-mail or text from her saying, I’ve got this script and I just made it into the top five of this short film contest. I need to have a producer on board in order to go through to win it. And she asked me, do you want to produce it? And I said send over the script, I’ll give it a quick read. So I went into the other room, all my friends were mad at me because I’m doing work during vacation and I came out of the room, I’m in tears saying this has to get made, I have to make this movie.

So it was really just a chance occurrence that Jess reached out to me to produce it. And I really just from that moment on took it under my wing, and we made it happen. It was a difficult process getting it funded though.

I think a little bit. Yeah, I think we’ve got about $1300 through that, so that basically contributed towards our film festival entries. We got $10,000 from Storyhive, which is Telus, a big media company up in Canada. They funded $10,000 worth. And then my husband and I funded the rest, which was more than that.

The film looks really good, like it wasn’t done on the cheap at all.

Honestly, if we were paying full price for everything… But we had so many contributors. The great thing about the Vancouver film community is everybody really supports each other. We had different equipment providers giving us these giant packages for free, for nothing or for very, very low (prices). And we had so many people come on board as crew who are working for parking, or for just a tiny honorarium and gas money. So we literally could not have made this movie without the generosity of the community.

You mentioned coming on board as a producer, were you always planning on directing and starring?

No. We actually originally got another director on and had tried for funding through a different media company, funnily enough. And they required that we have it cast before we submitted our proposal to them. So we had cast it and during the casting we found Ameko (Eks Mass Carroll), who is the child who plays the princess/prince, and we had been debating having another scene in there where we see the princess growing up. And my daughter and Ameko looks so similar that we thought, oh shoot, maybe I should just play the mom, if we’re casting Ameko. So at that point it was like, okay, well I guess, I’m going to act in it. And it just felt very right. And then that director wasn’t able to do it anymore.

We pitched it with me directing just because I knew the story so well at that point. It was like a year and a half, almost two years in since I had started producing and developing it and it was like I can do this. And it wasn’t the first time I had directed myself while acting. So it wasn’t like that was a brand-new thing, but this scope was a lot more, it was a bigger scope of using those two skill sets in tandem.

..And this is a fairy tale that’s told like a fairy tale and it’s a 2020 movie or a 2018 when I think it came out, it’s very of the moment. It’s something that I think that a lot of people will say, Oh those fairy tales don’t speak to me, but this one does.

Right. It’s a bit more representative of some of the things that we’re going through nowadays as families. Right? And not that there is a trans person coming out to their parents in every family, but there’s other versions of that happening constantly. Whether it’s just a kid wanting to be an artist instead of an astronaut, it’s this family dynamic thing that is universal really, told through the story of a transgender child. And then at the same time, the visibility issue for trans people has been very minute on the screen and representation that way matters more now than at any other time. And for me, having elements of social justice in all of my films is a big deal. I want to make sure that I am using my platform to progress society towards the next step of acceptance and love. And that’s really what it’s all about: teaching parents to just love their children as they are, as they were made.

Exactly. I’m forty-one years old now and I still remember that it was a very real thing that even “liberal” parents would disown their children if they came out as gay.

I think the language has changed. I mean I think back to, and I’m around your age, I’m thinking back to the late nineties. There wasn’t language like what was a transgender person? What was a bisexual person? Queer was not a definition that I knew of. And so we’ve gained access to more definitions and, I guess, a better way to explain and identify what is happening for people. So it’s somewhat easier to accept when you can identify it. I think maybe that’s what’s happened. It can be explained now and it’s not just this freak of nature, because it’s never been a freak of nature. This has always been happening. It’s just that it was always hidden before, and we’re finally getting toward the point in our society where we can talk about it openly, we can be LGBTQ and it’s not the end of our lives, unlike other other places in the world.

I want to switch gears a little because I know your time is limited and your movie screens in a few minutes. How has it been showing your film to audiences over the past, what, two years or so?

We started screening it about a year ago because we had updated some of the visual effects. So technically this version was out January of 2019. And our first festival was last May, I believe.

How are people responding to the film?

You know what? I have had nothing but great reactions. I’ve never once had a bad reaction to it, which to me I think is an indicator of how successful the fairy tale structure is in teaching and opening people’s minds. Fairy tales have been used as a format for centuries for a reason, right? And that’s something that gripped me so much with the script was it had all these fairy tale elements and tropes, but they were used in a bit of a subversive way to give a modern story and to teach some, like I said, love inclusivity. So that to me is.. I think it’s doing its job. I think it’s doing exactly what it was made and intended to do. I’m surprised we haven’t gotten any bad comments, to be honest.

Visually, the movie looks great too. Can you tell me about that element?

Thank you. The design elements really came together. I had a vision in my mind and I’ve got to say, I have never seen the inside of my brain on screen before until this film happened. And I think there was just such great synchronicity between myself and the designers that we had in each department, and they were able to take what I was seeing and I guess I was able to communicate it effectively enough that they were able to take my thoughts and then elevate it. And it made something beautiful. So it’s really just that example of a team coming together and really jelling.

I think it looks great on a big screen. And our DOP (Naim Sutherland) is going to be there tonight as well as he’s got another one is playing in the next block as well, but he’s so incredibly talented. So much of, yes, maybe I wanted things scrolling certain ways and I came to him with shot lists. But again, it’s just everybody took my brain and just elevated it. And I’m so thrilled with how it turned out.

Before you have to run across the street for your movie, what is going on with your movie after this weekend, after, like, half an hour from now?

What’s next? Oh gosh. Well, there’s still a few more film festivals that we’re waiting to see if we get into. But as I had said, next week we’re playing the Vancouver International Women in Film Festival. It’s purchased by Out in Schools, which is a Vancouver based LGBTQ awareness initiative. So they go to different schools, and they have little presentations. They’ll show films that teach about inclusivity and acceptance. So A Typical Fairytale is one of those films that they now have in their repertoire to show. So it is going through the school system a little bit in Vancouver right now. Beyond that, it is on video on demand, on Telus (in Canada) and that’s kind of where we’re at right now.

So is there a place where people that aren’t close to film festivals can see it?

Well, you can watch the older version without the updated visual effects on the Storyhive website. Or you can go to YouTube and type in “A Typical Fairytale” and it would be the older one. Otherwise, there’s nowhere online yet. But we will put it online, the newer version, once we are finished our festivals for sure.

Last thing: do you have any social media that people can follow?

Yes, I’m on Instagram primarily, which is AnnetteReillyOfficial and I am on Facebook at Annette Reilly, and I do have Twitter @AnnetteReilly. Basically just Google my name.