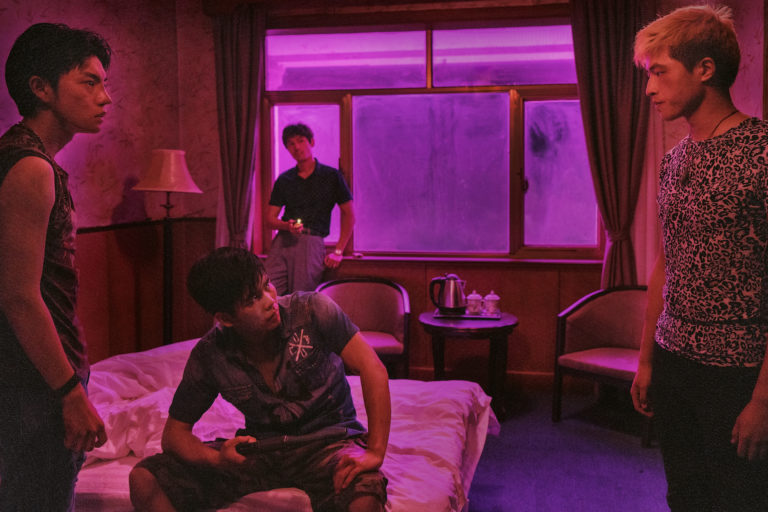 Director Diao Yinan (Black Coal, Thin Ice) reveals his characters with slow deliberation, both visually and narratively. The first thing we see of protagonist (or is he?) Zhou Zenong (Hu Ge) is a dove tattoo on his hand, just below a set of bloodied knuckles. His compatriot for much of the film, Liu Aiai (Gwei Lun-mei) as is introduced similarly: close shots of her hands fishing a pack of cigarettes out of a purse, the slow reveal of her slight frame, and close cropped hair as she makes a careful approach to ask him for a light. The story of each of their identities and how they came to meet on opposite faces of a concrete post under an overpass in the rain consumes the film’s compelling first act.

He’s the head of a small time crime family with a stake in a citywide motorcycle theft ring; she’s not his wife but she’s more than happy to substitute for him. How he came to have a price on his head and what they’re going to do about it frames the overall story, but as their backstories are fleshed out through halting conversations, details cast new light on everything we’ve heard before, throwing each of their motivations into question.

Some of this fuzziness is part of the fun; other ambiguities may be an overzealousness for style or some degree of “lost in translation”. But these flashbacks and the ensuing games of cat-and-mouse provide occasion for some unforgettable scenes. A dingy hotel basement packed with small time crooks attending a businesslike seminar on strategies for stealing bikes and maximizing value descends into a brawl over allocation of turf. The scene later plays out in amusing parallel when the police get involved. Gangs on tricked-out motorcycles compete in an “Olympics of Theft” to settle a score, racing through prime districts in Wuhan, liberating motorcycles from their owners, racing through tunnels on glowing red scooters, and piling up their prizes in a remote countryside field. When the contest turns shockingly gory, gunplay and a grave mistaken identity put Zhou Zenong on the run from both his criminal rivals and a vast police force.

On the run with questions about who to trust, his plans for his freedom vs. a large amount of reward money seem to be in constant flux. A few long days of shifting alliances show us around the sprawling district: flea markets, late night diners, and the titular Wild Goose Lake where an “innovative” form of prostitution has sprung up involving “bathing beauties” taking their clients for swims with benefits.

The film is shot mostly at night and the choices of color and composition are exquisite, with exceptionally staged action, immediately choreographed fights, and breathtaking imagery. It’s a fascinating portrait of Wuhan, made long before anyone associated the area with the start of a global pandemic, but many of the characters — by virtue of being on either side of a citywide manhunt — practice admirable social distancing. Everyone’s always a few paces behind, around a corner, observing, scheming, dodging, and making careful or desperate choices. They move throughout bustling city bathed in vibrant neons and the glow of yellow halogen lamps, which really makes the reds pop when gang violence or overzealous cops undertrained in firearms turn bloody. Amid the violence and paranoia, there’s also whimsical beauty, too: a street filled with dancers wearing illuminated shoes, an empty circus tent where a floating head sings fortunes, the lights of far off motorcycles traversing the hills, dreamlike zoo with penguins, tigers, and elephants illuminated in the dark.

As the film winds into its final act, I admit that I lost track of every character’s alignments, affiliations, and loyalties. But what would a crime caper be without a little bit of confusion to keep things interesting and a bit off balance? When you’ve got two captivating screen presences at the heart of the film, on the run, with motivations to puzzle over amid kinetic action and a ticking clock, it’s more than worth the ride into the dark.

The Wild Goose Lake is currently playing in virtual wide-release through a partnership between Film Movement Plus and local independent cinemas. A three day rental costs $12 and is split between the theater and distributor.