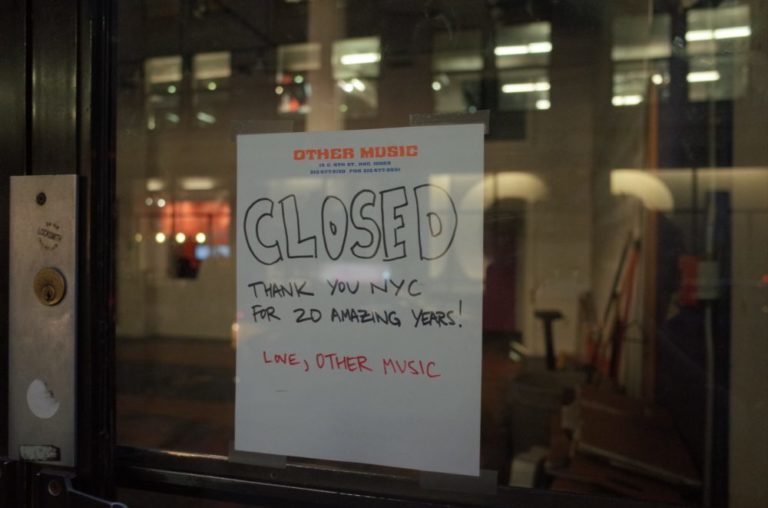 In a more perfect world, the new documentary Other Music would be a celebration of the famous Manhattan record store and people would be watching it the same weekend as Record Store Day. Alas, Other Music closed in June 2016 (the same year all bad things happened) and most record stores are closed indefinitely.

Other Music was a record store that was open on Broadway from 1995 to 2016, when it was forced to close with declining music sales and higher rents. When people stopped buying CDs, the famed record store tried to pivot to selling mp3s and then vinyl but it wasn’t enough. Apparently only Lou Reed missed downloading music through Other Music’s mp3 portal. Even staff members said they never used it. Moreover, the economics of buying CD’s is far better for record stores than records. This documentary celebrates its legacy as a place that turned countless people on to new music, but it also documents its unfortunate closing.

Located across the street from a large Tower Records, Other Music carved out a niche for having knowledgeable clerks who had all had deep understandings of underground music multiple sub-genres. Some past clerks who formed bands included Avey Tare from Animal Collective (who, the documentary notes, didn’t have very good customer service skills) and rapper Beans from Antipop Consortium, who reportedly would recommend his own group to customers, regardless of what they were looking for.

Co-owners Josh Madell and Chris Vanderloo were employees at the famous video store Mondo Kim’s. They joked in this movie that, when they left, Mr. Kim might’ve wanted them killed, according to some co-workers. While Madell and Vanderloo said they were always customer-focused and tried to not condescend to patrons but that was a problem the store faced throughout its twenty years of business from other clerks. My favorite singer-songwriter, Regina Spektor, compared shopping at Other Music with the first day of the school year, where you enter nervous. The documentary also showed a clip from an Aziz Ansari comedy sketch where he is an Other Music clerk who murders a customer for asking for the Garden State soundtrack. For what it’s worth, Matt Berninger of the National said he’d prefer being condescended to if the other option was being helped by someone trying to sell records to make money. I sure as hell wouldn’t!

Rude clerks or not, it’s disappointing that a record store where actual humans worked, where they turned people on to esoteric music, where it meant so much to customers, and where it lasted years longer than the Tower Records across the street. Moreover, the staff was pretty diverse and Madell and Vanderloo said they tried to hire people with expertise in music that other staffers didn’t to appeal to a wider customer base. The documentary works as both a celebration of a place where people could go to learn about new music but also a cautionary tale of what happens when only dollar signs matter. A fast-casual restaurant, Broken Coconut, moved into the 15 4th Avenue space in 2017. The market clearly decided there is a larger audience for broken coconuts (or whatever they sell) than Os Mutantes b-sides. I don’t think it’s an improvement.

Other Music can be streamed through Oscilloscope Labs starting today. Your rental can support either the Northwest Film Forum or Scarecrow Video.