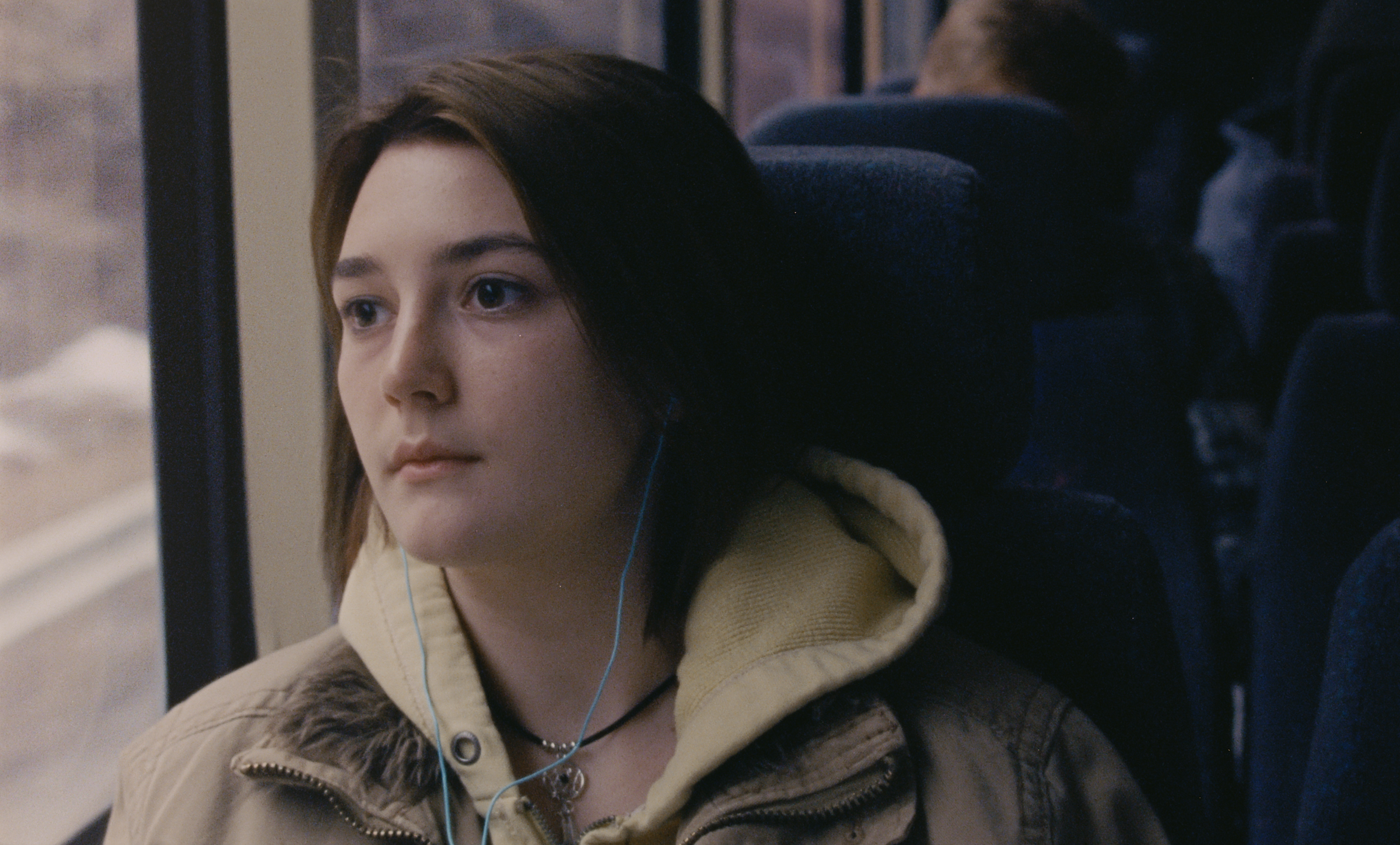 Eliza Hittman is establishing herself as a chronicler of young people on the fringes at the precipice of personal peril. In 2017’s Beach Rats, a Brooklyn teen’s covert exploration of his sexuality leads to increasingly dangerous situations. With this year’s Never Rarely Sometimes Always, she brings a compact chronicle of a rural teen’s journey to terminate an unintended pregnancy. Beach Rats launched a bright career from newcomer Harris Dickinson; I suspect that Never Rarely Sometimes Always will do the same for Sidney Flanigan who makes her captivating film debut here.

She plays Autumn Callahan, who we first meet in the midst of a small town high school talent show. Amid corny acts and barbershop quartets, she stands alone in pink Converse high-tops, a shiny matching jacket, and glittery eyelids playing a guitar and singing an heartfelt re-interpretation of the Exciters’ “He’s Got the Poser”. A musician before being cast in the film, Flanigan’s a great performer, but her set’s interrupted by a jerk who calls her a slut. She perseveres admirably, but afterward at the local pizzeria, she’s sullen amid familial praise and the glances of other students. Tensions flare, but at least gets a smidge of vengeance against the table of teen boy hecklers when she storms out.

At home, her mom (the actor/musician Sharon van Etten, who also gets an end-credits song) seems supportive but stretched thin between work and her kids. Her stepfather reads as somewhere between passively hostile to utterly disinterested, more affectionate and engaged with the family dog than anyone else in the house. At night, she works alongside her cousin as a checker in the local supermarket where customers proposition them (both underage girls) to go to their parties and their unsympathetic boss lurks behind a one-way mirror and makes the end-of-shift cash-count as creepy and uncomfortable as possible.

So it’s perhaps understandable that Autumn doesn’t turn to any of the ostensible authority figures in her life when she confronts a growing suspicion about her extended mornings of “not feeling well”. If the glimmer of hope for a caring local resource that springs from a visit to a reproductive health facility (run out of a seemingly kindly woman’s home) isn’t quashed by phrases like “a positive’s always a positive” and “are you abortion minded?”, the ancient VHS playing an abortion scare video makes it clear that she’s frighteningly on her own with any course of action other than carrying the “beautiful baby” to term.

This is a film with limited dialog, one where onscreen Google queries like “abortion facts Pennsylvania” and “self-induced abortion” and their dispiriting results instantly inform the extremely limited options available to her. So, when her cousin figures out what’s up one night through a supermarket bathroom stall, they gather up a pouch full of cash, pack a suitcase, and set off in the flat gray light of a late winter morning to board a bus for a long ride to New York City.

This girls trip into the bright neon lights and confusing geography of a big expensive city becomes a clear-eyed procedural that shows what is actually required for a rural teenager to obtain an abortion without notifying her parents. It is certainly harrowing, but never melodramatic, with a plot structured almost as a series of quests to creatively overcome obstacles that makes it surprisingly watchable. Flanigan and fellow newcomer Talia Ryder (as cousin Skylar) are captivating screen presences, who convey a lot, often without saying much at all. With little money but a lot of resolve, they navigate an unfamiliar city and a world filled with terrible men. Amid these space-invading objectifiers, Théodore Pellerin, as another young out-of-town visitor, reads as a borderline exception, though any good intentions can be attributed in to lonely hormonal obliviousness.

When they finally make it — navigating subways, late nights in bus terminals, the arcades and bargain pastries of Koreatown, and unanticipated delays — to Planned Parenthood, it’s feels like a kind of triumph. For most of the film, Flanigan’s portrayal of Autumn is one of guarded reserve and survival mode, frequently unwilling to ask for or accept assistance. This makes her somewhat of a blank canvas. It’s not until she’s at the clinic, completing a personal history questionnaire with an empathetic social worker whose multiple choice answers give the film its title, that cracks appear in her stoic facade. Her responses — verbal and emotional on a closely framed face — hint at a much deeper reading of her character and backstory.

It’s a quietly tremendous performance that grounds an unexpectedly illuminating account of the practicalities (and impracticalities) of obtaining much-needed care. Hittman presents each step in this quest with unsensational pragmatism and constant compassion. The result is by no means a polemic, but the kindness and professionalism that Autumn encounters at Planned Parenthood is both a welcome respite, but also an enraging reminder that these resources are rare, unequally-distributed, and under constant attack. By centering it in a deeply felt character-driven drama, the essential message is all the more convincing.