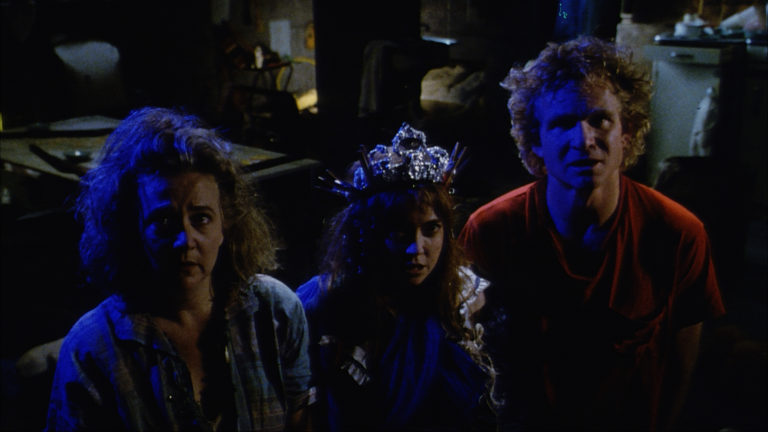 Of all the directors who got their start with exploitation film legend Roger Corman in the ‘70s (a list including but not restricted to Martin Scorsese, Francis Ford Coppola, Jonathan Demme, and James Cameron), Paul Bartel was one of the most unconventional and iconoclastic. Like Corman’s other proteges, Bartel’s early efforts were straight-up genre pictures made with the requisite amount of studio-dictated T&A, violence, and action. But his movies showcased a sharp intelligence, an admirable readiness to embrace the bizarre, and a streak of mordant black humor seldom exhibited in assembly-line drive-in fare.

His feature film debut, 1972’s Private Parts, was a psychological thriller housing an undercurrent of sexual deviance and characters that, with hindsight, are almost David Lynchian in their untethered strangeness. And Bartel’s biggest hit as a director, Death Race 2000, wrapped some razor-sharp social commentary in a sci-fi action package back in 1975, over a decade before Paul Verhoeven made such pointed satire acceptable in genre movies like RoboCop and Starship Troopers.

Rather than graduate to bigger mainstream projects like most of his peers, however, Bartel’s directorial efforts remained largely, resolutely independent. He supplemented those passion projects, largely comedic in nature, with gigs as a character actor in literally dozens of film and TV roles.

Bartel completed Shelf Life, his last feature film as a director, in 1993. Even after a reasonably well-received festival run, the movie couldn’t find a stable distributor, and when Bartel passed away in 2000, it was all but forgotten. Now, after almost 30 years, Shelf Life is seeing the light of day once more (it plays virtually via the Northwest Film Forum until April 26). It’s a fascinating discovery that is, in a lot of ways, quintessentially Paul Bartel.

The high-concept storyline begins on the day of John F. Kennedy’s assassination in 1963. Paranoid about further apocalyptic threats in the wake of Kennedy’s demise, middle-class dad Mr. St. Cloud (Jim Turner) seals himself, his wife (Andrea Stein), and their three small children into the family’s underground bomb shelter. Both parents pass away soon afterwards, leaving the kids in isolation.

Shelf Life picks up with the three children—Tina (O-Lan Jones), Scotty (also played by Turner) and Pam (also played by Stein)—some thirty years later. They’re still sealed up in the shelter, and while they’ve grown up physically, they’ve very much remained children psychologically.

Exploitation hits aside, Bartel seldom gravitated to crowd-pleasing popcorn fare, and Shelf Life is a textbook example of that. Director Hugh Wilson used this basic premise as a springboard for the fluffy but fun Brendan Fraser vehicle, Blast from the Past, some six years after Bartel completed his fallout-shelter parable. But while Wilson pulls his Rip van Winkle hero out of a cloistered environment early on, the three leads in Shelf Life spend a lot more time in their enclosed space. Bartel’s much more interested in exploring the dynamics of confinement, and in the makeshift society that these children in grown-up bodies have created for themselves.

That’s also the focus taken by Jones, Turner, and Stein. The three actors conceived Shelf Life as a stage presentation over a few years of workshops and tinkering, and as a result their characters and interactions adeptly walk a tightrope between innocence and creepiness.

The notion of three adults in one confined space, acting like grade-school-age kids for 84 minutes, will most definitely not be everyone’s cup of tea. And despite showcasing its director’s warped sense of humor, it’s not as laugh-out-loud hilarious as Bartel’s high-water mark, the brilliant 1982 jet-black comedy Eating Raoul.

But if you’re a fan of Bartel’s filmography and/or willing to meet an unconventional movie halfway, Shelf Life is a compelling piece of work. All three leads are spot-perfect, engendering a surprising amount of empathy as the movie progresses. The actors and Bartel add some interesting shading to this closed-off world, too: Kids’ role-playing games take surreal, funny, and sometimes disturbing tangents, distorted by the mental toll of extended confinement and an ancient TV set that only sporadically picks up channels. And since the movie’s cultural references are either impossibly obscure or fictitious, it sidesteps superficial referencing and achieves an odd sort of timelessness. Bartel also does a good job of invigorating what’s essentially a filmed play by employing expressionistic darkness, skewed camera angles, and vivid primary-colored lighting to reflect his characters’ mindsets.

In the end, Shelf Life showcases Bartel’s trademark black humor, his uncompromising spirit, and his perceptiveness as a chronicler of human nature. As of this writing, the most powerful nation on the planet is hinging on the whims of an immature, impulsive political neophyte—a living case study of how resistant so many people are to evolving beyond childhood.  That, and the irony that this smart, unsettling, nervously funny movie about isolation is screening digitally during a global pandemic (to an isolated self-quarantining audience, no less) are twists of fate that Paul Bartel himself would likely relish.

Shelf Life screens virtually at the Northwest Film Forum, and the Forum’s extended its run through May 10. Online tickets are available at the theater’s website.