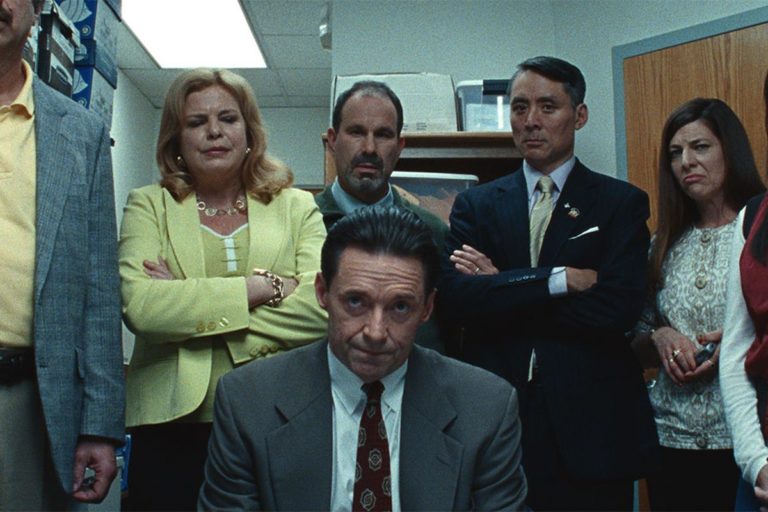 Bad Education, a new movie that debuted on HBO this weekend, tells the story of Frank Tassone (Hugh Jackman) and Pam Gluckin (Allison Janney), two school administrators who orchestrated the largest case of embezzlement in the history of public schools. Over time, the two funneled over $10 million from the school district to their own accounts.

Tassone was, by all accounts, a popular superintendent who brought a lot of positive attention to the Rosyln, NY school district, including expanding its focus on literature and improving the school’s rankings high enough (top ten in the nation in 2004) that their high school graduates were coveted by Ivy League colleges. Because things were going so well for the district, students and parents, not to mention auditors, and not to mention Tassone’s charisma, the two were able to get away with it for so long and take so much.

Things started going south, though, when a plucky reporter for the school’s newspaper begins looking at the district’s finances and finds a few things that don’t add up. The reporter, named Rachel Bhargava and played by Geraldine Viswanathan, is based, loosely, on Rebekah Rombom, who was a senior at Roslyn High when she broke the story in the school’s paper (and later wrote about it for the New York Times). Rombom has said the Rachel character did a lot more reporting in the film than she did in real life. Concurrently, the school district is notified when Gluckin’s son buys a bunch of supplies from multiple hardware stores and has them shipped to his home. They didn’t even know he had a district credit card.

Jackman is compelling as Tassone (and he’s reportedly more handsome than the real life figure), though I’m not sure if Tassone matched Jackman’s portrayal of his vanity (he’s seen in Bad Education getting a face lift). Still, Tassone was very much a sociopath and Jackman’s acting is quite convincing of the charismatic fraud, and especially during his implosion. It’s easy to see why so many people wanted to accept Tassone’s excuses when he was so likeable and delivering results. I think that’s where the strengths of this movie lie. It’s fascinating to watch Jackman’s Tassone get into a mess and see how he fails to talk himself out of trouble (and the steps he takes to try to contain Gluckin, who he’s happy to throw under the bus to save his own ass).

Janney is also very good in her role as Gluckin, who shares some of Tassone’s sociopathic tendencies (and ultimately embezzled more money than Tassone), but she’s still subordinate to him so she makes for an easy scapegoat. Gluckin’s role is different in that she’s forced to resign from her job and Tassone says it’s due to health, so she’s getting flowers and gift baskets sent to her home.

This wouldn’t be a made-for-TV movie if there wasn’t a sordid element and the movie spends a lot of time on another of Tassone’s deceptions: he has a live-in husband (on Park Avenue!) and a much-younger boyfriend he frequently flies to Las Vegas to visit. I believe that the acting is what keeps this from devolving into a trashy movie. Jackman and Janney (and also Ray Romano) are very good here.

Ultimately, this is a portrait of a sociopath who’s breaking not because no one believes his lies any longer, but that it’s no longer useful to.