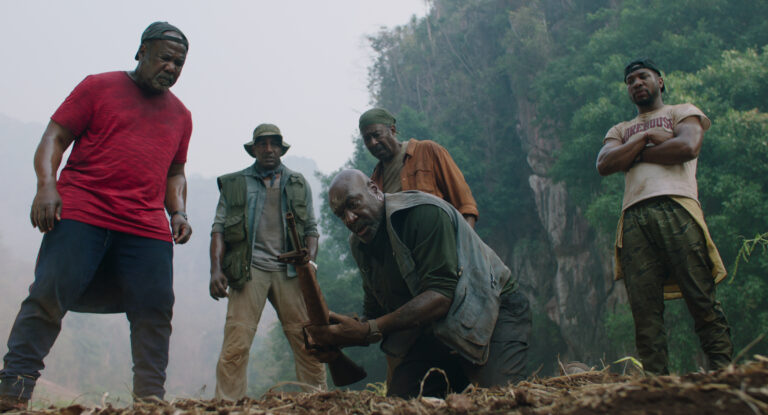 In another timeline, Spike Lee’s latest joint, Da 5 Bloods would’ve had a star-studded red carpet premiere at Cannes, playing out of competition given that its director was slated to lead the festival’s jury. Instead, the global pandemic cancelled the festival for the first time since World War II (though it didn’t prevent them from bestowing laurels on an official lineup of selected films). The film missed its moment to be fêted on the La Croisette, skipped what might have been a wide and lucrative theatrical release, and has now arrived on every Netflix user’s home screen this weekend, still amid a ravaging pandemic, but also during a global uprising to affirm the value of Black lives. Though it couldn’t have been planned, the timing and mechanism of this monumentally entertaining and deeply resonant film couldn’t have been more perfect.

Though the primary action takes place in the near-present, with four Black veterans returning to Vietnam to tie up loose ends, Lee firmly situates its interests in the tumult of the late 1960s and 1970s with an arresting collage intro reel of clips featuring Muhammad Ali, Angela Davis, Malcolm X alongside iconic photos of Armstrong on “Da Moon”, mass protests, and violence spanning the war, Kent State, and the 1968 Democratic National Convention. Scenes from the past slide away to reveal modern-day Hoh Chi Minh City and a reunion in a gilded hotel lobby and their wardrobes and demeanor speak to how the ensuing decades have treated them: Delroy Lindo is Paul (still rocking a war-era look, Vietnam Veteran ball cap or do-rags, a lot of sleeveless denim and American flag T-shirts); Clarke Peters, Otis (polo and ponytail); Isiah Whitlock Jr., Melvin (floral leisurewear jacket, beret, and umbrella-clad drink close at hand); and Norm Lewis, Eddie (cowboy hat, western-wear, and an insistence on picking up al the bills). They served together in the war as the titular 5 Bloods. The fifth member and squadron leader, “Stormin’ Norman” (Chadwick Boseman), is present only in memory and in the form of a weathered old photograph. His brothers in combat have returned to the country to fulfill promises made to him on the battlefield that he wasn’t lucky enough to leave behind.

That mission will take them back into the jungles, but before that they spend a night living it up in the big city, at a club with Apocalypse Now projected behind the dance floor, reluctantly accepting a round of drinks from former Viet Cong across the bar, and catching up with lovers left behind after the fall of Saigon. Although their official purpose is a mission to locate and repatriate the remains of their fallen comrade, their commitment to Norman also involves the small matter of a large chest full of gold bars, which entails a need for shaky deals with local contacts and questionable diplomats with the ability to move vast sums of money out of the country undetected. Each interaction — from civilians around town to power players — is fraught with baggage, prejudices, and long-lingering grudges from “the American War”. Much of these weights are personal and emotional. The unexpected arrival of Paul’s son (Jonathan Majors, in a strong follow-up to The Last Black Man in San Francisco) to fill out the crew turns them familial, and a run in with a crew of international landmine clearance activists (Mélanie Thierry, Jasper Pääkönen, and seemingly ubiquitous Paul Walter Hauser) makes the dangers of long-buried wounds of the past literal.

Lee films most of the present action in bright wide aspect-ratios that frame the landscape cinematically and allow all the guys to fill the screen, interspersed with Super-8 style home movies and artistic tourist photos to document their expedition. For the past, he squishes the frame to evoke broadcast television coverage of the war’s perilous firefights with grainy immediacy. [Cinematographer Newton Thomas Sigel spoke to Slate about these choices.] While Boseman appears in flashbacks as their charismatic leader on a dangerous mission, the remaining actors play their younger selves with only the assistance of costume changes. The decision to forgo digital de-aging feels almost like a jab at Scorsese’s big spending in The Irishman; it’s both hilarious and an effective way of reinforcing the degree to which the past and present intermingle. Even for those who made it out alive, parts of them remain tethered to the harrowing experiences of a half-century prior.

As a caper flick alone, Da 5 Bloods is a great success. It looks fantastic and the Bloods have tremendous chemistry. Watching them interact, perform ornate secret handshakes, react, squabble, and debate over what their friend, squad commander, and near-spiritual leader — would have wanted from them is a real treat. They all bring tremendous assets to the instantly identifiable friendship, that’s in and of itself a meta-reunion of reunions : Clarke Peters bringing soulful and grounded notes to his former medic and (spoiler) Whitlock’s unleashing a trademark “Sheeeeeeeee-it” at just the right time. But it’s Delroy Lindo’s Paul who’s the most haunted by the war, and he swings for the fences, with a combative and desperate unspooling, a tender reckoning with his long-internalized guilt, and a searing direct-to-camera indictment that makes for an unforgettable performance. As they make their way deeper into the countryside, by riverboat through jungles (set to “Ride of the Valkyries”, naturally), and floating markets, on foot through rice paddies and thick vegetation, a clearer picture of the past emerges, long-simmering tensions boil over, suspicions peak, and (spoiler) as with most heists, many, many, things don’t go according to plan resulting in fractured alliances and suspenseful explosions of violence. I went from jotting down laugh lines to scrawling HOLY CUSSING WHAT?! in my notes in a matter of seconds.

The Easter eggs and references alone would make for an education of film and history. It’s a war pic, a buddy comedy, a historical interrogation, and a red MAGA hat, with its evocation “President Fake Bone Spurs”, changes hands a few times to dramatic, tragic, and comedic effect. The soundtrack, heavy on Marvin Gaye unaccompanied vocals, is often introduced with cutaways to “Hanoi Hannah” as the voice of propaganda radio targeted to Black soldiers (this is also how the men learn of MLK’s assassination), and these songs function as voices from the past echoing with enduring relevance to the present. Working masterfully on this big canvas, Spike Lee spotlights the lives of these Black men, how they mattered to each other and the world, while imbuing the ample pleasures and thrills of the film with deep connective tissue to history, our current moment, and the days ahead. It’s both a great watch and the right thing to watch right now.