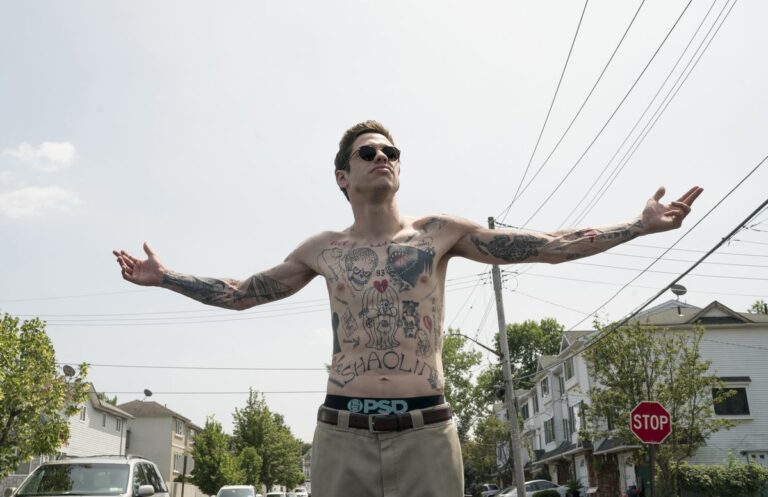 By any objective measure, two hours and seventeen minutes is a lot of time to spend with Pete Davidson.

Davidson plays basically a version of himself, or the persona surrounding his public image in Judd Apatow’s newest film. I think he’s generally funny and likeable and the movie is good overall because he’s a funny guy who has a character based around his own public persona, and his bad tattoos. I can’t imagine anyone’s enjoyment of this film differing from their opinion of Davidson’s ‘SNL’ work.

Davidson here is Scott, a failson of a single mother whose father was a heroic firefighter who died in the course of duty. Famously, his father actually was a firefighter who died on 9/11. In The King of Staten Island, Davidson’s Scott lays around the house all day and smokes pot and hangs out with his loser friends. He dreams of becoming a tattoo artist, and maybe even opening a restaurant/tattoo parlor, Ruby Tattoosday. But his layabout lifestyle is thrown into tailspin when he meets a nine year old boy while loitering in the woods with his friends. The boy initially wants Scott to give him a tattoo and Scott is eager to comply because he doesn’t have many options to practice his craft and his friends are tired of his bad artwork permanently adorned to his skin. There’s a hilarious gag about an Obama tattoo that made me laugh out loud.

I also don’t think I’ve ever seen a sex scene in a movie that is followed by a discussion of the side effects of antidepressants have on the sex lives of people.

Much is also made of Staten Island as a character itself, where Davidson seems to have a love/hate relationship. In the movie, it’s called the one place New Jersey looks down upon but a character wants to work in city planning to improve Staten Island’s image to a place one wants to visit, and Davidson once joked on ‘SNL,’ “Don’t get me wrong; I know Staten Island isn’t all heroin and racist cops. It also has meth and racist firefighters.”

When the boy’s father comes to confront his stressed-out mother (Marisa Tomei) and demands that she pay for his son’s tattoo removal, Scott’s life gets thrown into disorder. It turns out the man, Ray, is also a firefighter and he strikes up a romance with Tomei’s character. Scott very much does not approve but he goes through the motions of trying to bond with his mother’s new boyfriend. He does take a genuine liking to Ray’s children.

And that is par for the course with a Judd Apatow movie: there is a lot of heart in his movies underneath the veneer of detached humor. The movie gets more than a little sentimental as it goes on and Ray and Scott may even find that their relationship is symbiotic and they have a need for each other. I do think the movie picks up in the second half, after Apatow painfully establishes Davidson’s character that is roughly a composite of himself and his public image (but not completely).

I appreciate the scope and payoff for The King of Staten Island, but it could’ve been half an hour shorter without losing anything. I don’t understand why this movie was as long as it was, but it is a good and rewarding movie, just be aware that you’ll be spending a lot of time with its titular hero. In the end, though, Pete Davidson is the King of Staten Island, even if Staten Island likes Colin Jost more.

Rating: 3.5 out of 5.
Judd ApatowPete Davidson