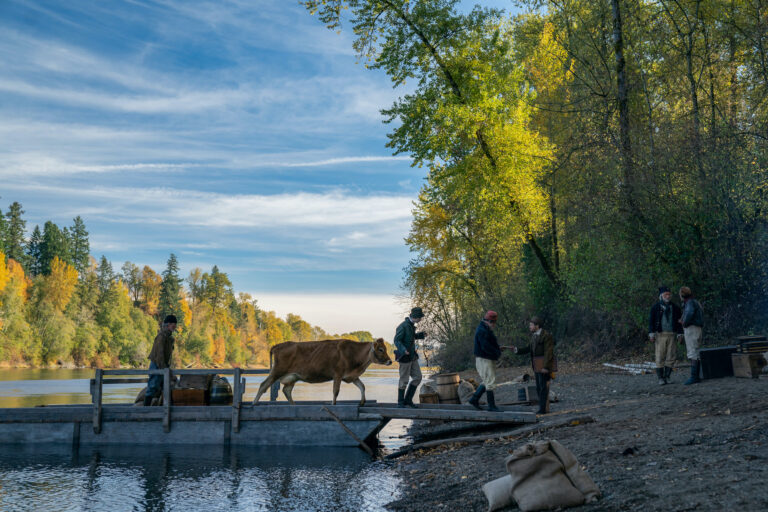 First Cow opens in modern times with a William Blake quote as thesis statement (“The bird a nest, the spider a web, man friendship”) and reference Jon Raymond novel The Half Life upon which the film is based. A woman (Alia Shawkat) and her dog spending a day in a woodsy park on the banks of the Columbia River, watching large barges floating past, and playing a bit of fetch. Eventually, as dogs of cinema are prone to doing, the pooch stumbles upon a buried bone. In a very Portlandia move, she performs a bit of D.I.Y. C.S.I, tenderly unearthing what turns out to be two human skeletons. From this grisly discovery, the rest of the movie flashes back to the story of these men and how they came to end up there.

The tale turns the clock back about two hundred years, to a time when industrious sorts were making their way west to find fortune in the Oregon Territory. With the arduous cross-country journey nearing its end, a fur trapping expedition’s cook (Cookie, John Magaro) is about sick of the guys who hired him as they are bored and frustrated with his nightly meals. One afternoon, while foraging for dinner supplies, he happens upon a Chinese immigrant (King-Lu played by Orion Lee), naked in the woods and on the run from a deal gone bad. When, at some risk to himself, he provides him with shelter and a hiding place for the night, his kindness forms the seed for a deep friendship and a fruitful business partnership.

Chance reunites them at Fort Tillicum, the terminus of the trapping trek and a ramshackle center for commerce springing up in the lush Pacific Northwest woods. It’s the sort of town where men drink heavily in a makeshift saloon and leave their baby with a complete stranger so that they can rush outside for a brawl. It’s here that Cookie’s finds himself with a boot full of money, free of his employers, living out of a tent, with few plans for the future. So he’s more than happy to accept an invite to ditch the bar and return to King-Lu’s comparably luxurious shed with a bottle of moonshine, the bounties of a series of squirrel traps, and to “make [himself] easy”. Soon, they’ve established rituals of domesticity and kindness, collaborating on the constant chores of daily frontier living, keeping the house nice, watching the world roll by, and sharing their modest dreams of what to make of the days ahead, with the long quiet days set to a spare folksy William Tyler soundtrack.

Using a 4:3 aspect ratio, cinematographer Christopher Blauvelt keeps the camera low to the ground and close to the characters, giving a sense of the constraints of the woods, the intimacy of the friendship, and the scale of their ambitions. While Cookie imagines a life running a small hotel, King-Lu is more a striver. Having traveled the world, he finds something attractive about the rough-edged northwest, a sense that “history hasn’t arrived yet” and a hope that maybe they can be ready for it this time. In this setting, that future arrives in the form of a majestic cow emerging through the morning mists on the river. The first of her kind in the town, she’s survived the journey west to satisfy the local aristocrat’s (Toby Jones, donning a top hat and stiff affect) very British yearnings to have a proper cup of tea with milk.

During one of their cozy idle fireside chats, King-Lu gets an idea about how to take Cookie’s baking to the next level. A one-time clandestine operation becomes a habit of night-milking and whispers of sweet nothings between Magaro and Eve, the very charismatic cow. Portending baked good crazes to come, their made-to-order oily cake pop-up bake shop with a secret ingredient, soon becomes the hit of the artisan market that springs up outside the fort, with hardscrabble men lining up hours in advance to hand over cash or trinkets for a taste of the homes they left behind.

With this moving story of friendship, Reichardt also captures a part of the country at a point of transition and possibility. King-Lu is right about the arrival of history, with the tenuous interface of the region’s native people and the trickling arrival of capitalists, dreamers, and industry from the east, showing up to reinvent themselves, extract natural resources, and find a fortune. Its a time when tribal elders are guests of honor when the local aristocrat invites his sea captain frenemy to dinner for tales of the latest fashions from Paris. It’s in this milieu that some innovative hustlers can make a name for themselves in the baked goods space and imagine leveraging their success into a station beyond the makeshift home they’ve made for themselves in the largely unsettled forest.

While it sounds ridiculous to describe anything involving a clafoutis being high-stakes, our investment in the relationship and shared aspirations comes from the nuanced work that Magaro and Lee built between their characters, making even the smallest moments vibrate with a sense of urgency and importance. It’s the timeless resonance of their friendship that makes the story of nascent capitalism, tenuous authority, and the uncertainty of history an insightful, moving, affirming, and ultimately timeless snapshot of the beginnings of the Pacific Northwest as we’d come to know it.

First Cow is now available on a variety of VoD platforms. Although it’s disappointing that it’s theatrical run was cut short, there’s something timely about it being released into homes in the midst of a pandemic that has turned so many of us into isolated home bakers and craftspeople. (All images by Allyson Riggs, courtesy A24).