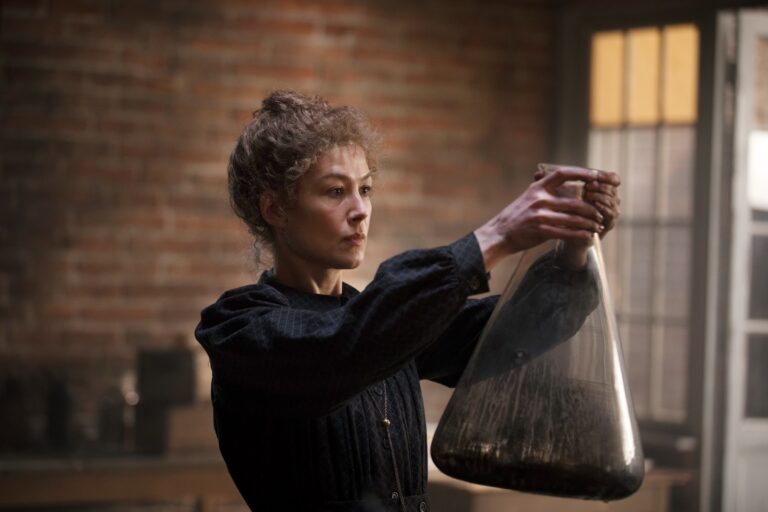 The celebrated Polish-born French scientist Marie Skłodowska Curie, upended our fundamental understanding of the universe through her discovery of radioactivity and the elements Polonium and Radium. For this groundbreaking work, she became the first woman to earn a Professorship Paris’s vaunted Sorbonne University as well as the first woman to win a Nobel Prize, the first person to win two of them, and the only person to win in different fields (in Physics, shared with her husband Pierre and Henri Becquerel; and later on her own in Chemistry). While these achievements brought her fame and acclaim, they also slowly robbed of her health, leading to an early demise from aplastic anemia at age 66. Marjane Satrapi brings Curie’s life to the screen, often prioritizing biographic highlights over an exploration of personal turmoils. This approach may not play to a modern audience’s hunger to plumb the inner-depths of great figures from history, but this lack of sentimentality is likely what the great scientist who eschewed special favor would have demanded.

In a bit of a throwback, the film spans Curie’s entire life, opening on the bright sunny Paris day that would finally find her collapsing in her office after decades of toxic radiation exposure and unfolding through a series of deathbed reminiscences that flash through a long, bumpy, gurney ride into the long halls of a hospital that she’d long avoided entering. In desaturated flashbacks, we meet her as dour university colleagues evict her from her laboratory space, sending her on a quest to find a new space for her research, and into a series of chance encounters with Pierre that would chance the course of their lives and make scientific history. Rosamund Pike embodies Curie, throughout all but early visions of childhood, employing her many talents to enliven a figure of steely determination and single-minded pursuit of knowledge with occasional sparks of humanity.

Adapting Lauren Redniss’s National Book Award-nominated graphic history, Radioactive: Marie & Pierre Curie: A Tale of Love and Fallout, Satrapi brings some whimsical bursts of creativity to series of dusty brown research laboratories, monochrome functional costumes, and generally dark turn-of-the-century Paris. Marie meets future husband and collaborator Pierre (Sam Riley) with a appropriately nerdy pickup line (“We will look less awkward standing together than we will apart” / “That’s a theory I can support”) while watching Loie Fuller perform her luminous “Fire Dance” at the Folies-Bergère, all undulating fabrics under swirling rainbow spotlights amid a dim room of enchanted onlookers. Later, when they find their way into bed together, the camera follows their shadows breaking free of their earthly bonds and ascending into the heavens. And once they slog through the arduous process of isolating the new elements from tons of harsh raw materials, few subsequent shots are free of the green Radium glow that entranced the whole world. Marie even keeps a vial at her bedside, something between a tiny talisman and an inexhaustible nightlight. These painterly touches bring some life into what could otherwise feel like a historical recitation and play to the strengths that made Satrapi’s adaptation of her own graphic novel Persepolis so effective and widely acclaimed.

It’s this understandable desire to do right by the many details of Curie’s life that feels in conflict with allowing her story room to breathe, dulling the film into a series of greatest hits and intriguing factoids. It’s a rich story and all much of the highlights are squeezed into the two hours we have with it. We get glimpses of trauma of losing her mother at an early age, the hard work of the laboratory, her wedding in a lab-dress, the bicycling honeymoon and nude sunbathing in the country, Pierre’s curious fascination with spiritualists and subsequent violent accidental death by carriage, Marie’s popular celebrity and downfall, a messy public extramarital affair, and the loneliness of raising two daughters while having an extraordinary career. I suspect that this whirlwind presentation works better in Redniss’s printed cyanotypes that leave the pacing in the hands of the reader and the details to the imagination.

Pike does find some nice moments in her mostly stoic portrayal — Curie’s Nobel speech to an audience of Swedish feminists in Stockholm among her own grief and scandal; a reluctant visit to the front and steadfast resolve to bring modern medicine to the troops with her daughter — but it’s an uphill battle given an unfortunately clunky script. While I’ve admired Jack Thorne’s work in Skins to Harry Potter and the Cursed Child, it falls flat here, often as a series of laughably broad lines that serve more as nods to Wikipedia than invitations for actors to find nuance or character development.

With a spare score from Evgueni and Sacha Galperine that blends modern-sounding electronics bleeps and ghostly theremin, the film also stretches beyond Curie’s biography to follow the independent life of her discoveries. Vivid, saturated flashes from show the horrors (and some hopes) that survived her: earnest flyboys dropping bombs on Hiroshima, a Japanese father watching his son and city about to be annihilated by a fireball, midcentury tourists paying to watch a nuclear test melt a fake mannequin-inhabited town in the New Mexico desert, brave young firefighters rushing to their deaths into the neon blue heart of the Chernobyl accident, and a nervous cancer-stricken child faces a linear accelerator for experimental therapy. Emphasizing the long and unpredictable ripples that emanate from scientific breakthroughs brings an interesting dimension, elevating their afterlife from the typical end titles to a vital component of the main narrative.

Although the film can’t possibly achieve the soaring successes of its subject, Curie’s life certainly deserves celebration. One could wish for less of a biographical fact-dump and more of an illumination of what animated her individual atoms, but the inventive visuals do just enough to elevate an occasionally clunky recitation into the realm of the recommendable. There’s a bit of nudity and acknowledgement of scientists as sexual beings, but those are hardly the worst lessons for anyone looking for some impromptu home-schooling history curriculum.