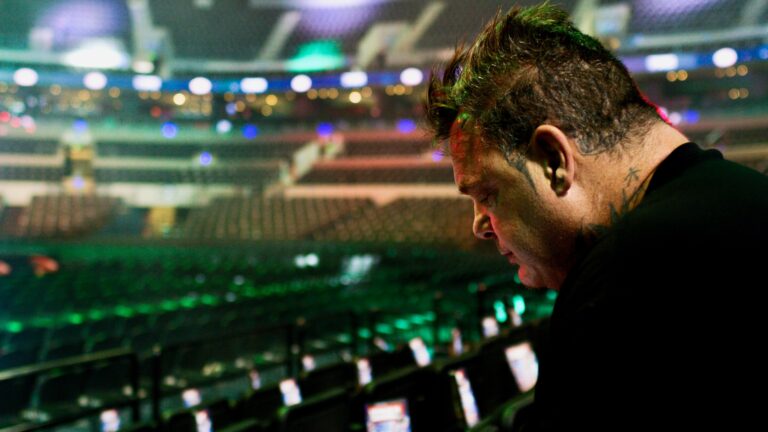 Nail in the Coffin: The Fall and Rise of Vampiro (Canada| 86 minutes | Michael Paszt)

It’s cliché as all get-out, but true here: The life of Ian Hodgkinson, better known as veteran pro wrestler Vampiro, is one of those stories rife with enough colorful characters, action, real-life melodrama, and hairpin twists to fuel three conventional documentaries.

Appropriately, the most colorful of the characters who populate Nail in the Coffin: The Fall and Rise of Vampiro is Vampiro himself. So it’s a testament to director Michael Paszt’s entertaining and thoughtful documentary that Hodgkinson/Vampiro also emerges as a multilayered human being.

Nail in the Coffin opens by dropping squarely into the epicenter of TripleMania XXV, a stadium-filling lollapalooza mounted by AAA (one of Mexico’s biggest wrestling organizations, not the auto rescue folks) in Mexico City. Hodgkinson oversees the action from behind the scenes with a sure but stressed hand, contending with a slew of inflated egos, unplanned ringside injuries, and the booze-addled onstage antics of wrestler Jeff Jarrett.

From there, Paszt hopscotches back and forth chronologically to tell Hodgkinson’s story, through his childhood as a survivor of sexual abuse, his teen years as an angry punk rock kid in Quebec, his decision to cast aside his promise as a hockey player in favor of pro wrestling, his stint as a bodyguard for Milli Vanilli (yes, you read that right), his long-term involvement in the wrestling industry as a promoter and manager, and his status as a WCW wrestling icon.

There’s already more than enough content here to satisfy fans of pro wrestling, with a lot of love given to lucha libre, that most theatrical and gymnastic of grappling styles. And Nail in the Coffin could easily coast on the most superficial chronicling of Vampiro’s life and career. Fortunately, there’s emotional depth to enrich the inherent pulpiness of Hodgkinson’s saga.

Hodgkinson’s daughter Dasha, a bright teenager he’s raised as a single parent, represents the one stabilizing force in his life, and their relationship serves as one of the foundations of the film right out of the gate. There’s a terrific, revealing scene early on, where Hodgkinson calls Dasha in the middle of TripleMania XXV, completely ignoring the maelstrom roaring around him to eke out a heartfelt conversation with her.

The abiding love between father and daughter provides an affecting emotional anchor, but Paszt doesn’t shy away from the thornier and more complex aspects of Hodgkinson/Vampiro’s love/hate relationship with his career.

Decades of physical battering in the ring have left Hodgkinson with two dozen concussions, chronic arthritis in 86% of his body, and near constant physical pain at the age of 50. One doctor posits that the wrestler is one concussion away from severe dementia. He openly expresses his utter burnout on several occasions. And Hodgkinson’s behind-the-scenes hustle ably proves that the guy need never set foot in the squared circle again. Yet, even at TripleMania XXV he hurtles himself into the arena, executing moves and taking physical lumps that’d kill people half his age.

Parenthood may offer fulfillment, redemption, and unselfish love. But going out in a blaze of glory amidst a roaring crowd offers the man known as Vampiro the addictive rush of the most insidious drug. One of Nail in the Coffin‘s greatest strengths is that it stares down that addiction with a directness that connects as hard as the most powerful body slam.