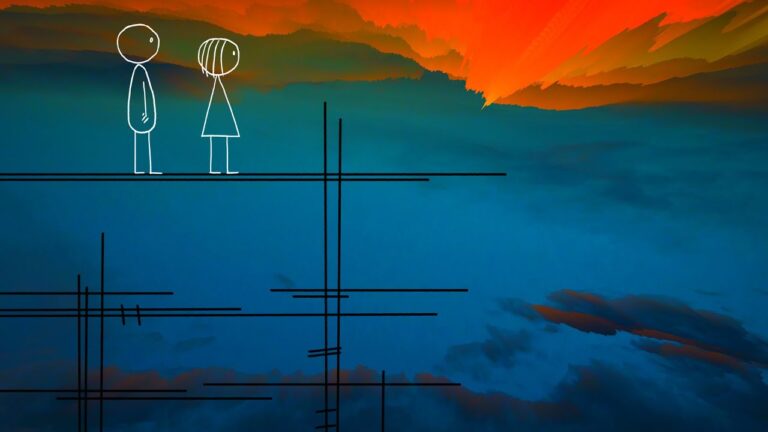 If you are fortunate enough to have six dollars in your pocket and a half hour on your schedule, there are few better ways to spend them than with the surprising third installment in Don Hertzfeldt’s World of Tomorrow series of short animated missives from a distant dreadful future. The first two episodes (Oscar-nominated World of Tomorrow and World of Tomorrow Two: The Burden of Other People’s Thoughts) centered around a bunny-eared child named Emily (inspired by Hertzfeldt’s niece) and cloned versions of her, visiting from a future of cloning, time-travel, and memory projections from a time after the Earth’s imminent destruction. Stick figures, whimsical animation, child voice acting, and the disorientation of time travel combine with heady themes of death, resurrection, and inter-generational longing made for a surprisingly compact and effective speculation on small moments of joy that survive into a grim future.

As the title suggests, Episode Three turns the focus to Emily’s beloved David, who we meet fleeing the planet in a tiny spacecraft, surprised to be interrupted by a deeply buried implanted memory while online shopping for neural enhancements. With the longest runtime of the trio and the almost-linear plotting, it makes for another melancholy and laugh-out-loud voyage of existential sci-fi time travel business. The missive from the distant future sets stick-figure David on a quest through oddly beautiful 3D rendered landscapes and grim absurdities, deleting skills from his computer-enhanced brain and suffering through hilariously mental pop-up ads, to make room and pay for the privilege of this high-definition transmission. A story of clones, fragmented consciousness, and conflicting motivations deepens the distant love story from earlier episodes while also speculating on just how horribly humans would make use of centuries of enhanced technologies and commerce. If this all sounds confusing and weird, it definitely is, but in the best way. Like the rest of the series, it’s funny, oddly moving, and deserving of being immediately implanted directly into your neural tubes where its memory will gestate for years to come.

World of Tomorrow Episode Three is available on Vimeo.

In other streaming new releases, Netflix has startlingly well-reviewed Adam Sandler comedy Hubie Halloween, just in time for a spooky season that’ll likely be socially-distanced for most.

SIFF’s Virtual Cinema adds Aggie, a documentary by Catherine Gund about her mother Agnes, a philanthropist and art collector who turned the 2017 sale of Roy Lichtenstein’s “Masterpiece” into the Art for Justice Fund to end mass incarceration. Then, on Tuesday, they’ll debut Academy Award winning director Alex Gibney’s (Going Clear, Taxi to the Dark Side, Enron: the Smartest Guys in the Room, among others) astonishingly-timely new documentary Totally Under Control, which investigates the Trump administration’s response to the coronavirus pandemic. Arriving just after the president’s own Covid-19 diagnosis and a day before a now-cancelled debate (due to the virus), the film and its savage appraisal of the country’s pandemic failings has the feeling of being an explosive October surprise.

Grand Illusion, along with a host of Halloween-appropriate weird horror movies, spends much of the coming weeks highlighting the career of director Alejandro Jodorowsky, from his new documentary Psychomagic, A Healing Art, to new 4K restorations of provocative theater adaptation Fando y Lis, psychedelic western El Topo, and scandalous (and maybe local brewery-inspiring) The Holy Mountain.

While Governor Inslee announced that movie theaters might be able to re-open at vastly reduced capacity, the latest from SIFF suggests that they don’t expect to re-open their doors until 2021. So as usual, as usual, proceeds are split between the distributor and the cinema, helping to keep these art houses from folding during the long long lockdown.