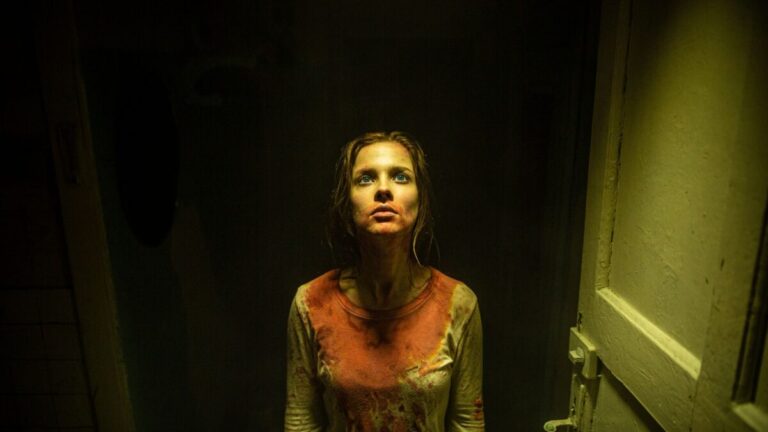 If Sleepless Beauty saw release two decades ago, its attempts at shocking viewers might actually resonate.

Young English teacher Mila (Polina Davydova) has barely hit the door of her flat after purchasing a fish from a grotty pet store, when she’s overpowered and knocked unconscious. She comes to in a foreboding concrete bunker of a room, and soon she’s subjected to numerous forms of physical and psychological torture by a purring female voice on an intercom and a silent, masked thug. Sleep deprivation, in particular, factors into Mila’s torture prominently (hence, the title): In lieu of rest, she’s forced to endure a barrage of ghastly footage, crammed into her skull for eight hours a night via some Oculus-style virtual reality headgear.

Major content caveats aside, there are some genuinely well-crafted films saddled with this label, and if you’ve got the stomach, the best of them have something to offer beyond blunt-force psychic trauma. Before it became absurdly stupid in its last 20 minutes, Eli Roth’s Hostel (the sub-genre’s first big mainstream hit) actually delivered a creepily effective meditation on American xenophobia. The first Saw movie supercharged its sadistic streak with Rube Goldberg creativity and carefully-orchestrated suspense. And Rob Zombie’s The Devil’s Rejects served up grittily vivid ‘70s atmosphere and an ensemble of great character actors to leaven the sensory assault.

Sleepless Beauty, unfortunately, pretty much fails to distinguish itself. There’s an attempt at bookending the mayhem with some political relevance, and at times it flirts with satirically commenting on the internet’s propensity to emotionally numb its users. But any socio-political statements are either half-assed, or so broadly delivered that they may as well be written on a wall, in crayon, by a grade-schooler. The broad and literal attempts at profundity would be excusable if Sleepless Beauty bothered to get into Mila’s head the way her tormentors do. Instead, Aleksandra Khvaleeva’s screenplay never bothers to sculpt her protagonist into anything beyond a tormented cipher.

The movie’s directed by Pavel Khvaleev with undeniable technical skill, but the dingy visual palette nicks Nine Inch Nails videos and Saw with equal slavishness. Worst of all, it occupies an unsatisfying middle ground that’s far too unpleasant for horror civilians, but nowhere near extreme enough to satisfy genre hardcores.

Ironically, the movie’s brief flashes of fevered inspiration occur during Mila’s forced dives down the virtual reality rabbit hole. She’s bombarded by a torrent of psycho-sexual imagery in those moments, and the barrage of gore and surrealism is rendered by animator Jakov Ivanusa in a cut-out style that suggests Terry Gilliam’s old Monty Python animation, abruptly bludgeoned to a pulp by a meth-addled H.R. Giger. Too bad the remaining 99.7% of Sleepless Beauty never comes close to that level of delirious, genuinely disturbing ingenuity.