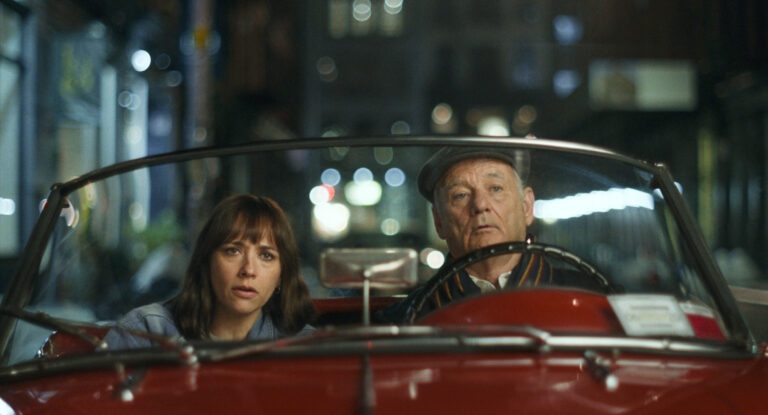 Despite a wide range of subjects spanning French royalty, a Civil War girls’ school, and lonely Tokyo tourists, Sofia Coppola has built an exceptional filmography linked by the degree to which she makes being rich, beautiful, and a little bit sad somehow look pretty great, all things considered. Whether a diaristic meditation, suspenseful southern gothic, or true crime docudrama, her movies have a certain low-gloss mood, perpetually cool, tastefully curated, expensive-but-rarely-ostentations. On this front, her latest feature, a light comedy in the form of a father-daughter detective story motivated by suspicions of marital infidelity, does not disappoint.

Rashida Jones plays Laura, a writer coping with the frustrations of shifting her night owl schedule to one more amenable to also being a work-from-home mother, ferrying her two kids from their Greenwich Village apartment to a school where she’s constantly besieged by other parents and teachers with inane one-sided conversations. An odd middle-of-the-night jet-lagged interaction with her freshly-workahaulic husband (Marlon Wayans, who, out of plot necessity is an amiable cipher) sparks doubts about exactly what he’s been up to during all those late hours and constant business trips with his young hip assistant at his booming new boutique tech firm. While her mother encourages her to set aside her concerns, her art dealer father (Bill Murray, a droll gadfly) is more than eager to stoke them in the name of prompting stakeouts as quality time. With his history of cheating he’s an expert in the field, and as a very successful art dealer he knows everyone and gets all the best tables.

It succeeds largely because it never discounts as frivolous the very real feelings of marital uncertainty, professional stagnation, or conflicted personal identity. A smart trick that Coppola employs is to mute the usually ebullient Rashida Jones into someone succumbing to an expectation to conceal all of her anxieties under a veneer of good cheer and household management. It’s only in the small moments when she’s alone, unwatched, at the edge of the frame that the camera catches her with her guard and the sadness and anxieties flickering through.

While there’s a seriousness to the subject matter, their adventures through the city make for a bubbly entertainment with a great soundtrack (Coppola’s husband Thomas Mars of the French rock band Phoenix once again contributes an original score). Murray is having a blast, overstuffed with outmoded anecdotes and self-serving factoids, with a connection for just about everything build from a career catering to fickle whims of the the city’s wealthy collectors. They careen around New York’s best restaurants, storied society apartments, coveted tables, and downtown hotspots in search of the dirt on her husband, with some overdue bonding and reckoning with the as a not-unexpected side effect.

Over the last couple of weeks, movie theaters have re-opened in Seattle. I’m far too paranoid to go back into closed spaces with strangers to watch a movie, but new releases are slowly trickling out to AMC and Cinemark’s multiplexes. Meanwhile arthouses like SIFF, NWFF, and the Grand Illusion remain virtual only with a host of screenings that benefit the shuttered cinemas.

For instance, this weekend NWFF presents a filmed version of Pony World Theater’s Suffering Inc for those who miss office life and/or live theater. The production was recorded at 12th Avenue Arts in July 2016; opening night features a live Zoom Q&A with the cast and crew. Elsewhere SIFF debuts Citizens of the World, an Italian comedy about Roman retirees moving out of the city to stretch their pensions, and Coming Home Again, Wayne Wang’s drama of family reckoning centered around a day spent preparing a traditional Korean New Year’s Eve dinner.

Of course, there’s also plenty on other streaming services. You could do far worse than a Sascha Baron Cohen double-feature of drama and comedy with the recently-recommended Trial of the Chicago Seven (Netflix) and Borat Subsequent Moviefilm (Prime Video).