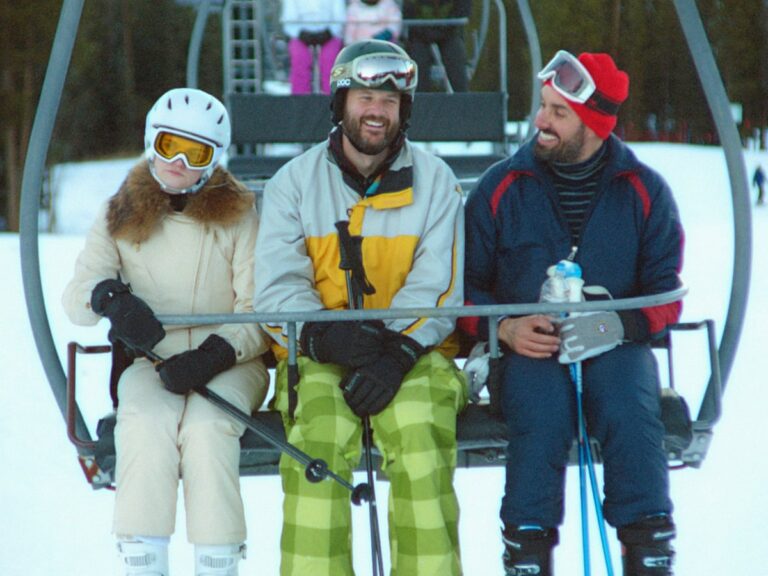 The Climb was a movie that I thought would be a sleeper hit of 2020. It is a bittersweet comedy that centers around two best friends whose friendship becomes toxic after one commits an act of betrayal. It was a hit around the major festivals around the world in 2019 (Cannes, Telluride, Sundance, SXSW, Toronto) and the buzz it generated was well-deserved as I loved it. That was all until COVID-19 hit right before it was scheduled for a theatrical release. Fortunately, it will get another chance with a theatrical release, starting this weekend.

Michael Angelo Covino and Kyle Marvin wrote and star in this film, as Michael and Kyle (Covino also directs), who have been best friends for as long as they can remember. That friendship is soured when Michael goes to bed with Kyle’s fiance. There are lots of movies about how sex complicates things, but what I found so interesting was that this movie is an empathetic character study about two people who have been intertwined their entire lives until a poor decision ruins that. It’s very clear that the Michael and Kyle characters very much love each other even when Kyle has trouble forgiving Michael for his actions. I found the movie so authentic and relatable that I was bawling my eyes out at the end of it.

Before the pandemic hit, I spoke with Michael Angelo Covino and Kyle Marvin by phone about The Climb. Now that the movie is being released this weekend, I’m glad I can finally share it.

First, let me ask about how the genesis of this movie came about.

Michael Angelo Covino: The genesis came from a short film that we made that is more or less the opening scene of this movie. But in that case, I revealed to Kyle that I slept with his ex-girlfriend and he continues to chase me up the hill. And that was just an idea that I had as I was on a long bike ride, contemplating life and a situation that happened where one of my ex-girlfriends and one of my close friends had slept together. And I sort of wondered why that upset me, but also if I was allowed to be upset. And also if we could find humor in it.

I was really surprised at how much it hit me, but I just realized also that you’re Mike and Kyle as we’re talking, and your characters are named Mike and Kyle in the movie. So how much of this is autobiographical? I hope not much. But how much of it is your guys’ friendship?

Michael: Well, it’s an autobiography, so this is essentially the last eight years. I think it’s more of a documentary to be honest. I think that the real part about it is our friendship. I think our friendship is something that we have a very deep friendship with each other, and that’s probably the most autobiographical thing about it. Other than that, I think we chose characters that we were both interested in and those are separate from our own personas.

How did this go from being a short film to expanding it? Did you just think it needed to be, that you wanted to spend more time with these characters? Or how did you decide to go from the short film to a feature film?

Michael: Yeah, that’s exactly it. I think we love the characters and the dynamic between the characters, and we wanted to explore what would happen with these characters maybe over the next decade or so. Knowing that they probably wouldn’t change that much and they would probably continue to do the same things over and over. And that’s sometimes the way life is and that’s okay. And so it was about sort of telling a story that doesn’t have much character growth, but also in some way you feel like there is some level of growth.

I was just an inconsolable wreck after watching the movie. I don’t know why but I just felt like I could identify with you guys so much. And just being in this friendship that you know is both kind of toxic for both of you, but also know that you two are best friends.

Kyle Marvin: We find that humor is really cathartic. And I think that the kind of humor that we really respond to is the kind that kind of catches you off guard because you’re so invested in the characters. And then when something sort of absurd or off happens, it’s really a moment of relief in some ways. Our way to sort of break that tension that is really rooted in emotional clarity.

Were you surprised with how this movie has taken off? I mean, I know that it’s been doing really well at festivals and people have really seemed to respond to it.

Michael: I don’t think we ever could have planned for the type of reception that this movie’s had. I think like maybe deep in our hearts, we hoped for it. I think you always make a movie hoping that people respond to it and that an audience will connect to that. But there was no way we could have prepared for this level of just excitement, and the type of festivals we’ve gotten to play and the type of audiences we’ve gotten to share it with, have just been constantly surprising. And we’re just grateful.

What was your feeling after it played for the first time at a festival?

Kyle: We premiered the film at Cannes in France, which is a festival that has always been sort of the pinnacle of the cinema that we love and consume. And so that experience from the ground up was absolutely surreal. And it was also interesting to release a film to a French audience, the first audience who really saw it en masse were French, which was really interesting, how well they responded to it. And then it was fine to take it to the American cinema, like Telluride and Toronto and to see how people from all different walks of life respond in very similar ways to the characters.

I know you have a wider release coming up after you finished the festival circuit. Can you talk about what is going on with that?

Michael: Absolutely. I mean, we hit the jackpot with our distributors. Sony Pictures Classics came on to distribute the film with us and release it. And they really just get the film that we made and I think their kind of core audience is the perfect audience for a film like this.

Another thing I wanted to ask real quick was I loved Cheers when I was growing up, and so seeing George Wendt in the movie was just a delight. How did you get him on board?

Michael: From day one, we said Kyle’s father in the movie needs to be someone who everyone just feels comfortable with right out of the gate. And it’s someone who the second we see him on screen, we’re like, oh, all right. Now I feel at home. And George Wendt immediately came to mind when we were talking about that. And we thought, Oh, well, for sure, Norm’s not going to do it, but we can at least try. And we reached out to his manager and they loved the script and the short, and the next thing he agreed to do the movie. It was pretty wild how quickly it happened, but we kind of just said yes before he changed his mind.

What was the biggest surprise about making this film for you guys?

Kyle: Biggest surprises? I think there was a really interesting thing that happened that we couldn’t have ever predicted, which was this amazing sort of sense of community and focus on set that really coalesced around the way that we were shooting it. And because we were shooting these things as long single takes, there became this camaraderie in shorthand amongst all of the people on set, our department, camera, sound. Everyone was working together in this really tight and unique way. And it made for something really special when we were shooting where there was this sense of focus and energy and attention, that for me, was really a surprise and a wonderful experience on set.

I know I’ve taken up a lot of your time already. Before I let you go, can you talk about what you want people to get from the film, if there’s anything you want them to take away or notice in it when they see it for the first time?

Michael: It’s a tough one because we don’t really think about it in terms of what we want an audience to perceive. I think we know the themes and the ideas that we love about the film, but one thing that has been surprising and exciting is what people will come up to us and say to us after a screening…

One person came up to us after a screening at Sundance and said, “I just saw your film and I need to reconnect with a friend. I need to call my friend who I’ve known for as long as I can remember.”

I thought it was this endearing, like, I’m going to reconnect with my friend who I haven’t seen in a while. It was like, no, I’m going to tell my friend that I’m done with putting up with his bullshit. And that was a really lovely takeaway that we just never expected, and various conversations and things like that.

The Climb is now playing in several theaters in the Puget Sound area, in Seattle, West Seattle, Lynnwood, Tukwilla, Kent, and Woodinville. Tickets, showtimes, and more information can be found here. And if you do go to a theater, wear a mask!