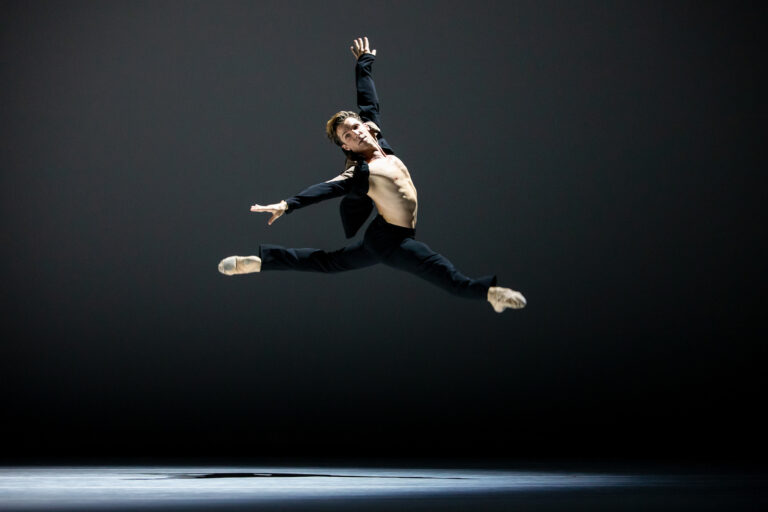 There are two world premieres on the bill for Rep 2 at Pacific Northwest Ballet (tickets $29/$39), and I’m writing this in some haste so you don’t miss them: digital screenings are offered through November 16. Either one of Penny Saunders’ Wonderland or Jessica Lang’s Ghost Variations would impress on its own, but together they offer an arresting double-image of artistic creativity. Also on the program is a bubbly excerpt from Twyla Tharp’s Waterbaby Bagatelles and Susan Marshall’s Arms—which obviously wasn’t made for couples in COVID-19 lockdown to identify with, but watch it and you’ll see what I mean.

For the $29 “seats” you also get Saunders’ Alice, a short companion piece to Wonderland filmed separately and starring Noelani Pantastico. At $39, PNB throws in two more versions of Marshall’s Arms (one featuring a dancer we haven’t seen much lately named Peter Boal) and a new work from Amanda Morgan, This Space Left Intentionally Blank.

This is a lot of dance, and if you can, think about buying a digital ticket for each viewer—these are already less expensive than ordinary ballet tickets and as artistic director Peter Boal mentioned in an interview with Twyla Tharp (more bonus content), PNB expects to lose about $10 million in ticket revenue this year, compared to selling McCaw Hall seats.

At the close of Penny Saunders’ Wonderland I pressed pause so I could take a few extra moments to let the work sink in. Saunders has taken the cavernous McCaw Hall space and transformed it into another world populated by dancers and puddled with light (the almost-expressionist light design is by Trad A Burns). There is a conductor-dancer in the pit wearing a jacket Mork-from-Ork-style, but dancers keep popping up above the orchestra scrim in playful pantomime. Imposing figures stalk up the house aisles or sweep about backstage. You watch, Phantom-like, from the fly-space as a trio of dancers perform below, laid out on their backs in the orchestra pit. Up in one of the boxes, Lucien Postlewaite performs a solo, arms stretched out in yearning, fingers curving in and out, as if holding a beating heart—it’s the closest thing to a wordless aria that I’ve seen. Elizabeth Murphy’s lovely, enigmatic solo features an absence circumscribed by her arms, and concludes with her sinking to the stage, a spotlight on her hand unclenching in a death scene. Seated at the edge of the stage, Elle Macy and Dylan Wald are a couple, maybe on a date—Macy keeps forestalling a kiss from Wald with a hand over his mouth, and when it slips away it’s almost transgressive in our MASKS UP times.

An eclectic assembly of music (from Michael Wall, and including music by Jean-Philippe Goude, Hugues Le Bars, Erik Satie, Camille Saint-Saëns, and Stephen Foster) gives each setting its personality. Melanie Burgess’s costumes lightly corset almost all the dancers, with the upper body in a stretchy white fabric that makes it seem the dancers’ arms are in tights—the effect is otherworldly but also surprisingly functional. A few years ago we were all dazzled by immersive projects like Then She Fell; here the immersion is by virtue of shared imagination but I don’t know if it is any less potent. Saunders knows that we’d all prefer to be there in McCaw Hall in person, and while Wonderland yokes that yearning to be elsewhere, it reminds us that imagination is also a way of being present.

Contrasting perfectly with Wonderland‘s explorations of Lacanian dreamscapes and the dance of deferred desire, Jessica Lang’s Ghost Variations plunges into Romantic creativity, inspired by Robert Schumann’s hallucinatory belief that ghostly composers were feeding him music. Lang is as much interested in his wife Clara Schumann’s creative presence as the trope of the tortured artist, though. Robert’s compositions (the Theme and Variations II & V from Ghost Variations; and “Mondnacht” from Lierderkreis, arranged by Clara Schumann) are joined with Clara’s the first movement from Three Romances and Scherzo No. 2 in C minor—played with verve or somber stateliness, as needed, by Christina Siemens. Lighting designer Reed Nakayama paints the scene with a half-light, dissipating toward the wings, as if moonlight were on order. Occasionally ghostly shadows appear on the scrim behind the dancers, sometimes actual shadows cast by the dancers, and sometimes you realize with a start, the shadow breaking off and looming in size, not. Costume designer Jillian Lewis has the men in open shirts, the women in calf-length black lace skirts, slit at the side, with the effect that their shadows look like a 19th-century soirée.

Lang’s choreography gives PNB’s dancers a chance to show off their classical technique in a way that suits the work’s period. Romantic troubling of classical structure is what’s at issue; as you watch, you see Lang again and again create symmetries (sometimes cross-stage, which has a magical feel) only to have them break abruptly. Elle Macy is light-footed elegance, and her willowy clinging to Dylan Wald becomes wrenching in the final moments; Leta Biasucci, though, perhaps catches the spirit of the age best, with a sublimated forcefulness to the way her elbows set and arms push forward, her feet drive at the floor—there’s an unseen, private interior you can only glimpse hints of. She could be a Brontë sister, if that ever comes up in ballet. There are too many UGH SO GORGEOUS moments to mention, but you have to love the male trio’s entrechat dix-huit, and the space given to Postlewaite’s graceful promenade en arabesque, leg and arm cantilevered, a precious few seconds of personal equilibrium.

You can imagine that, while beautiful, this level of intensity requires a good deal from the viewer. The two shorter works on the program, notably the excerpt from Twyla Tharp’s Waterbaby Bagatelles, offer a little breather. From the moment you see the bathing beauties (capped of course, costume design by Santo Loquasto) wriggle and shimmy against a watery-neon glow (Jennifer Tipton, lighting), you know you’re in capable hands, though it’s in the parade of show-off male dancers that Tharp unleashes a torrent of choreographic ideas. I lost count of Jerome Tisserand’s swaggering entrechats. Arms swing side to side, legs skip straight out; there are leaps, pirouettes, spins, turns; the floor is stomped. It is high energy, set to a percussive work by Grateful Dead drummer Mickey Hart.

Susan Marshall’s Arms, set to a rumbling score by Luis Resto, is a bras-de-deux, with two dancers standing TOO CLOSE FOR COMFORT. In the program, the piece is performed by Leah Terada and the towering Miles Pertl, but bonus offerings include a Peter Boal-Jim Kent pairing and Sarah Pasch-Ezra Thomson. Each pairing, it’s almost a different work entirely. Nonetheless it remains particularly frustrating for me to see a dancer reach over and pull the other dancer’s arm over their shoulder, only to immediately shrug it off, repeatedly. Every time I think, oh, how nice—HOW RUDE. The work’s appeal, I think, has to do with this punctuation of abstract movement and shape-making with out-of-context, homely human gesture that it is impossible not to react to: the curved hand meeting a face, in all its ambivalence, appears in various instances. If there’s a moral to the story (well, and if you want a story), it might be something about seeing interpersonal space happen. Eventually the dancers settle on a series of gestures that allow them to coexist cheek by jowl.

Also in bonus material territory is Amanda Morgan’s choreographic outing, This Space Left Intentionally Blank, which I have intentionally called an outing as it features dance in several environments found outside McCaw Hall. You can see that the choreography responds to location, not simply because of space restriction but because of the productive opportunities that the spaces (the levels of a stadium, a parking lot with striped spaces, a corridor, a field, a jogging trail, scenic shop) provide. It has a dreamlike episodic structure, where a dancer will move off in one direction only for another dancer (or dancers) to arrive somewhere else. Don’t be in a rush—even it if is only 18 minutes, it is measured in its sense of its own time, parceled out in solos and ensemble pieces. A central moment for me was set in an empty warehouse-type space with a number of dancers carving through the space or simply rhythmically rocking, waiting for a signal to go.

Finally then there is Penny Saunders’ Alice, which is tonally different from Wonderland, and sort of a co-production of PNB and Seattle Dance Collective. Filmed (by Bruno Roque) in a small white garden…well, shed sounds too rustic and this little building has more architectural flair than that, but it suits that it should be garden-adjacent. We see Noelani Pantastico seated at (behind, below, above, and around, it will transpire) a mirrored table, as a computerized voice reads Alice in Wonderland at us. It’s really a marvel of economy in several senses: the White Rabbit is signified by Pantastico watching as her two fingers (white nail polish as a special effect) proceed past her nose in a V shape. Alice’s fall down the rabbit hole, a major editing feat, sees Pantastico tumbling and spinning in space (which, as I’ve laid out already, is a very small space at the end of a table in a small shed, not to get into the nomenclature again). Ballet dancers don’t normally have to be prepared for their close-up, but Pantastico has tons of expressiveness on tap (lessons are not on) as her Alice journeys through what here sounds more like an adult’s existential crisis—what, exactly, does it mean to be grown up? When do you really know who you are? All I can tell you is that it bears repeated viewings, and you’ll be charmed by it a little differently each time.