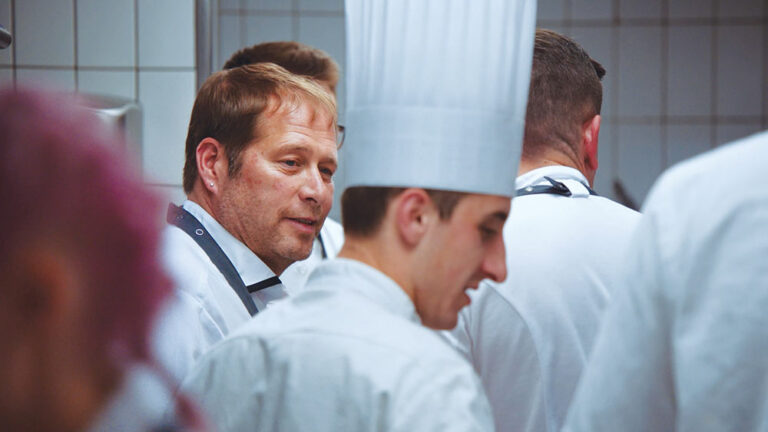 There’s something uniquely satisfying about watching people who are extremely good at their jobs being extremely good at their jobs. Case in point code be A Chef’s Voyage a new documentary about Bay Area chef David Kinch as he takes the staff of his three Michelin star, Los Gatos restaurant, Manresa, to Europe to collaborate on a series of pop-up meals with renowned French chefs in their French restaurants.

Kinch is certainly an accomplished chef and restaurateur and it’s dazzling to watch him (and his exceptional team) create food that is visually stunning and (presumably) delicious. The food pops on the screen, and I have no doubt it would be even more visually appealing if it were on a plate in front of you. Filmmaker Remi Anfosso is certainly adept at making mouths water in front of the television. And yet…

Last week, a lot of my Twitter feed was lit up due to an essay in the New Yorker, ostensibly about the Netflix show “Emily in Paris,” but about something the author described as “ambient television.” The key paragraph:

Netflix is pioneering a genre that I’ve come to think of as ambient television. It’s “as ignorable as it is interesting,” as the musician Brian Eno wrote, when he coined the term “ambient music” in the liner notes to his 1978 album “Ambient 1: Music for Airports,” a wash of slow melodic synth compositions. Ambient denotes something that you don’t have to pay attention to in order to enjoy but which is still seductive enough to be compelling if you choose to do so momentarily. Like gentle New Age soundscapes, “Emily in Paris” is soothing, slow, and relatively monotonous, the dramatic moments too predetermined to really be dramatic. Nothing bad ever happens to our heroine for long. The earlier era of prestige TV was predicated on shows with meta-narratives to be puzzled out, and which merited deep analyses read the day after watching. Here, there is nothing to figure out; as prestige passes its peak, we’re moving into the ambient era, which succumbs to, rather than competes with, your phone.

I see a lot of A Chef’s Voyage to be ambient film. There’s no real drama, save for a few logistical difficulties (not having the time in France to properly recreate Manresa’s sauces that take several days to perfect) and the natural turnover of employees in the restaurant industry. There’s a lot of detailed talk about cooking at such a high level that could interest the most devoted culinary nerds and David Kinch most definitely is a charismatic and knowledgeable figure (he’s won both an Emmy award as well as a James Beard). I am a food nerd, so I can appreciate esoteric discussions of French food (though I’m a food nerd that has “Eat at Joe’s BBQ in Kansas City” and “meet Guy Fieri” near the top of my culinary bucket list).

This movie, though, is being added to streaming services (it previously had a run in SIFF’s virtual cinema) at a time when indoor dining is illegal in many states (including the one I live in). The extremely minute possibility that anyone could enjoy a meal like the ones Kinch created in collaboration with the top French chefs he worked with is now nil. It is now more likely to be struck by lightning while buying winning lottery tickets than it is to eat one of these exclusive meals. And that’s totally fine! It just feels bizarre to highlight that at a time when everyone is eating takeout, delivery, drive-thru and whatever they can make at home.

The movie felt like the opposite of comfort food, a reminder of how exclusive fine dining is to a lot of people. It’s hardly the movie’s fault, but watching it reminded me not of the great meals I’ve eaten but how the governor of California attended a dinner at another Three Michelin Star restaurant, French Laundry (also on my bucket list), with lobbyists while imposing strict dining laws on his constituents.

A Chef’s Voyage is a lovely movie to look at but it’s best enjoyed from a distance, without too much involvement. It’s what makes it ambient film. You can get out of it what you want, I just liked it more the less I let myself get invested.

A Chef’s Voyage is now available on Amazon, Apple TV, and iTunes.