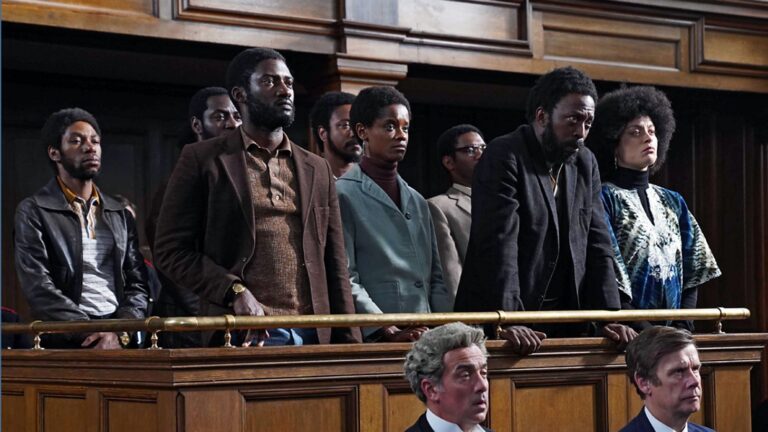 Stop me if you’ve heard this one: a group of activists protest on the streets of a big city, get into a violent conflict with the police, and are hauled into court on trumped up charges for inciting a riot. ‘Tis the season for civil rights courtroom prestige dramas, and just as Aaron Sorkin brought the Trial of the Chicago Seven to Netflix last month, Steve McQueen tells the story of a trial of the Mangrove Nine to Prime Video this weekend.

The first installation in his “are they films or television episodes?” Small Axe anthology that chronicles decades of experiences of London’s West Indian community, Mangrove focuses on Frank Crichlow’s (portrayed here by Shaun Parkes), restaurant that opened in 1968 and blossomed into a lively community hub in Notting Hill despite its owner’s modest intentions. Attracting a busy clientele for it’s delicious Trinidadian cuisine, it also became an around-the-clock source of support for the neighborhood, home base for organizers like British Black Panther Movement leader Altheia Jones-LeCointe (Letitia Wright) and activist Darcus Howe (Malachi Kirby), and the subject of frequent harassment by racist police officers and neighborhood councils. After a modest protest turned violent in the face of asymmetric police presence, the organizers are hauled into court at the Old Bailey for what became a landmark race-relations trial in the United Kingdom.

McQueen is undoubtedly interested in the courtroom drama and strategy — a young white hippie lawyer advises the nine, gets a haircut, and puts on the funny wig, the judge is more than a little biased without succumbing to buffoonery, and Howe and Jones-LeCointe elect to represent themselves to bring authentic voices into what could’ve otherwise been dry proceedings eager to ignore the racial discrimination elements in favor of the letters of the law. Yet, while the long-running trial certainly has its dramatic fireworks from a talented casts, twists of strategy, and compellingly-filmed turns, the film most shines as a document of the diverse human textures of the area and its people. Alongside the legal theatrics and appalling police violence, McQueen has a keen eye for capturing a rich sense of community: steelpan drummers spilling onto the street from the crowded restaurant for makeshift festivities, bodies dancing closely in the streets, the complicated home lives of the activists, and the smallest gestures of affection between them. Bringing an important piece of local history to a wider audience and populating the story with three-dimensional portraits of the people who stood up for the rights of themselves and their community makes for a highly compelling introduction to the series. I saw Lovers Rock as part of the virtual NYFF and the tone, scope, and topics are vastly different but equally attentive to the human scale story; so I’m eager to see the rest of the anthology as it rolls out throughout the year.

Mangrove is now streaming on Prime Video. Header image via BBC One.

In local cinemas (now all virtual due to the latest Covid-quashing lockdown), SIFF has a series of highly acclaimed documentaries available to support their operations while the doors remain closed. Collective follows the work of Romanian journalists who investigated a 2015 nightclub fire in Bucharest that killed 27 people, injured 180, and led to the deaths of 37 more in hospitals and whose investigations led to protests that brought down the government. SIFF also has City Hall, Frederick Wiseman’s sprawling look at Boston’s city government and the myriad ways that the work of public servants touches people’s lives and grapples with issues of racial justice, affordable housing, and climate action. At 272 minutes, it has to be one of the better price to viewing ratios out there.

Northwest Film Forum‘s seemingly unending parade thematic virtual festivals continues this weekend with the Travessias Brazilian Film Festival 2020. Curated by scholar of Brazilian cinema Emanuella Leite and with support from Professor and Director of the Center for Brazilian Studies Jonathan Warren, the festival runs from Nov. 20–29 with a program of feature and short films that aim to “give marginalized voices the mic in discussions of race, sexuality, and governance.” Passes are $50 for the general public and $35 for NWFF members.

Grand Illusion also remains closed, but has transitioned their operations to a streaming services library featuring new releases, classics, and cult compilations like The best of of VHXMAS, which brings “togather the worst and most insane holiday clips culled from the three legendary volumes” beginning just in time for your long stay-at-home holiday weekend.