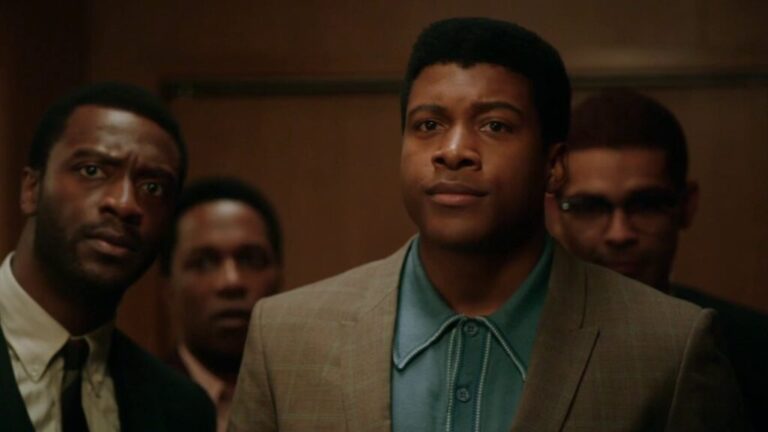 On February 25, 1964, Cassius Clay went into his fight for the Heavyweight Championship against Sonny Liston as a huge underdog. Clay (masterfully played by Eli Goree), not known for his modesty and restraint, knew he’d win, even though few others believed his bravado. It was a huge upset and those who bet on him won big because the odds were so lopsided.

Adapted from Kemp Powers’s 2013 play of the same title written by Powers himself and directed by actor and first-time filmmaker Regina King, this is a fierce and compelling film. It invites obvious comparison to the also-excellent Ma Rainey’s Black Bottom, because they were released within a week of each other (I saw them four days apart with no other movies in between), both take place mostly in one location, both feature mostly-Black casts (led by stand-out performances by their stars), both were directed by Black directors, and both were adapted from stage productions by Black playwrights. I prefer One Night in Miami, though both come very, very highly recommended.

The new movie One Night in Miami takes place mostly in the evening following Clay’s win in his motel room. He brings three of his friends to Miami to celebrate: singer/producer Sam Cooke (Leslie Odom, Jr.), NFL star Jim Brown (Aldis Hodge), and Malcolm X (Kingsley Ben-Adir). The personalities and egos of the four men are far too large to be contained in a single motel room. Brown and Cooke think they’re there to party and celebrate the big win. Malcolm X has other plans and they talk, argue, fight about racism, religion, Blackness and how it applies to each other, their roles in the world, and using their power to help other Black people. Clay and Malcolm also know something going into the room that Cooke and Brown don’t: Cassius Clay is on the verge of converting to Islam and becoming Muhammad Ali.

Most of the tension is between Sam Cooke and Malcolm X. Cooke is a wildly successful singer and record producer, he drives a flashy car and sells a lot of records. Malcolm sees him as being too compliant to white people and wonders why he can hear the struggles of Black people more in the music of Bob Dylan than Sam Cooke. Cooke, for his part, talks of the Black artists his success has allowed him to produce numerous Black artists and he told the story of “It’s All Over Now,” a song Bobby and Shirley Womack wrote and Cooke produced that peaked at 94 on the Billboard Hot 100. Cooke allowed the Rolling Stones to record a cover (and take it to number one on the pop charts) and said Bobby Womack was angry for six months, until he got his first royalty check, and then he told Mick Jagger he could have any other song of his he wanted.

Jim Brown (the only living member of this quartet) is also at a particular crossroads in his life. He’s one of the most dominant players in the NFL, but he’s also getting cast in films. The money is better in Hollywood, and it takes less of a toll on his body.

What I loved most about this movie was that Regina King’s direction fully embraced the claustrophobia of Clay’s motel room with such boisterous personalities. The acting is phenomenal (particularly Eli Goree as Cassius Clay). He was a dead-ringer for the boxing legend and fully embraced his mannerisms and ego. All of the actors held their own not just against the larger-than-life personalities they portrayed, but also iconic performances of the same figures (Will Smith was nominated for Best Actor in Ali, as was Denzel Washington in Spike Lee’s masterpiece Malcolm X). It felt timely and important, but it never once felt like Regina King was trying to force this movie to be great, she let it develop on its own and find it’s natural voice in between all of these big personalities. A movie set on one specific night 45 years ago sure has a lot to say about today.

One Night in Miami is likely to end up as my favorite movie of 2020. It is a very special and unique movie.

One Night in Miami is playing in some theaters now (where theaters are allowed to be open) and will be released on Amazon Prime on January15, 2020.