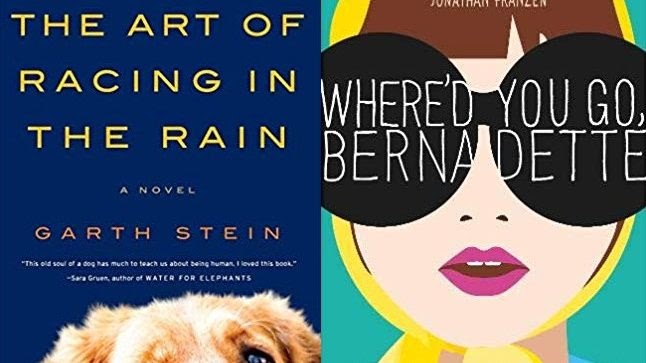 In successive weekends, two large-scale movies that were adapted from novels written by Seattle-based authors came out (The Art of Racing in the Rain by Garth Stein and Where’d You Go Bernadette? by Maria Semple). I don’t know if that’s unprecedented, but it’s worth considering whether or not those films are any good. I am currently in the critical–consensus minority, but I think they both are.

The Art of Racing in the Rain is told mostly through the POV of a golden retriever named Enzo, and voiced by Kevin Costner. He was adopted by a fledgling race car driver named Denny Swift (Milo Ventimiglia) and it’s all wonderful until Denny meets cute with Eve (Amanda Seyfried) at a supermarket. Enzo is overcome with jealousy, until he isn’t. Denny works hard for opportunities in his career and they don’t always align with his familial responsibilities, so he’s away for some pretty important life events. Eve’s parents (Gary Cole and Kathy Baker) notice and act with appropriate in-law-with-dough malevolence.

The movie is melodrama through and through, and nothing is subtle. You are hit over the head with tragedy and you important learn life lessons along the way. I’m usually allergic to such overt emotional manipulation, but I admired the competency of the film. It’s nicely paced, the acting is good, and it doesn’t shy away from it’s schmaltz. It was sweet when it needed to be, and Enzo provided some comic relief when the emotional intensity became too much. I haven’t read Stein’s book, but multiple people who have told me they don’t think they could handle a visual presentation of the story because of how sad it is throughout.

Seattle is home to Denny, Eve, and Enzo, and it’s like a lot of movies where it could be set anywhere if not for the author’s location. There were a few things Seattleites would quibble with, like Denny’s friends having the “third best Soundgarden tribute band in Seattle” and playing a show at “Nemo’s.” I’m also pretty sure that when they make a movie about Seattle circa 2019, Kathy Baker, with basically her same hairstyle here, will play Mayor Jenny Durkan. I also have no earthly idea how a race car driver can have both a career driving and living in Seattle.

Where’d You Go Bernadette? is Richard Linklater’s latest film and he takes a stab at Maria Semple’s hilarious novel. I had enormous reservations about seeing Bernadette because of my fondness for the novel, though film and literature are such different mediums that I’m not sure that’s entirely fair, but came out loving the movie anyway.

Cate Blanchett stars as Bernadette and she was, in a former life, the most exciting architectural prospect, but largely forgotten when one of her ambitious projects gets destroyed by a rich asshole that can’t appreciate her vision. She’s twenty years from that and now she’s living in Seattle with her Microsoftie husband Elgin (Billy Crudup) and exceptionally precocious daughter Bee. Bee dreams of boarding school and trips to Antarctica and choreographs elephant dances for first graders. She’s that kind of precocious. They live in, for some reason, an enormous house on the top of Queen Anne that is falling apart. Bernadette breaks windows and cuts up the carpet when they’re they quickest solutions because anything else is too much work.

Cate Blanchett is the star, of course, and her Bernadette Fox is one of the most memorable characters in film in the past several years. She looks like Anna Wintour and is outwardly cruel but hollow on the inside. She puts all of her prescription pills in a jar because she likes how the colors look, and she spends a lot of her time dictating e-mails to her virtual assistant Manjula, who could be scamming her. Her neighbors (particularly Audrey, played by Kristen Wiig) all hate her, and it’s mutual. It’s also hilarious, like when Bernadette accepts Audrey’s suggestion for blackberry removal, knowing what will happen next time it rains. And it will, this is Seattle after all.

One thing I think Linklater his collaborators get right is that it treats Seattle as a character in the story rather than as just a setting. The Art of Racing in the Rain could have been set anywhere, but Bernadette needs Seattle’s idiosyncrasies to propel the story forward. It wouldn’t be the same if some other company that isn’t Microsoft was developing a device that composes e-mail through thought. Semple’s novel is full of satire that only people of the Pacific Northwest will get, and there is still a lot of that in the film, too. I loved how Semple invented a few new ones that made it into the film. I think the funniest line in the movie is “On Galer Street, we don’t just think outside the box, we think outside the dictionary.” There’s another funny bit where Bernadette complains of seven-way intersections.

Bernadette is a unique and funny that goes in directions other films don’t, like, quite literally, the South Pole. But it is also very much a Richard Linklater film, so it touches on Big Ideas, like motherhood, depression, aging, having your dreams destroyed by capitalism.

Overall, I can’t wait to see Bernadette again, and, of course, read the book again. For The Art of Racing in the Rain, I think you need to be in the right mood to enjoy it. Luckily I was.