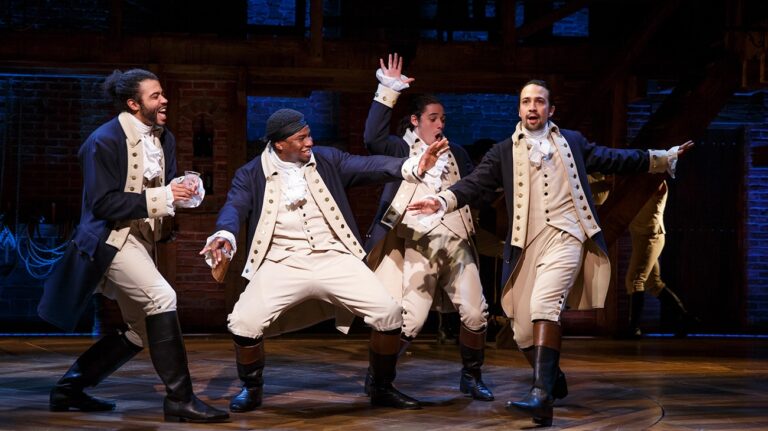 It’s America’s birthday, but it’s hard to feel like celebrating. Still, for this stay-at-home holiday, there’s blockbuster-sized new release skipping the theaters and going right to streaming for Independence Day. Hamilton, Lin-Manuel Miranda’s hip-hop retelling of our founding fathers made its way from an off-Broadway debut at New York’s Public Theater to become one of the most acclaimed productions of our new century. With stellar race-reversed casting, the musical powerfully ties the nation’s past and present into a breathtaking examination and invigoration of our revolutionary history, the central role of immigration, and the power of storytelling. The music and verbiage have since permeated the culture and launched a series of touring productions and soundtrack obsessives. Like most without geography and fortune on my side, I missed my shot at seeing the inaugural cast, but was still blown away by their successors. Luckily, before the original cast (Miranda in the title role, Leslie Odom Jr. as Aaron Burr, Daveed Diggs as Lafayette & Jefferson, Christopher Jackson as George Washington, Phillipa Too as Eliza Schuyler, Renée Elise Goldsberry as Angelica Schuyler, and Jonathan Groff as King George, among others) went their separate ways, Walt Disney spent three days in June 2016 filming the show for the big screen. Given the drought in summer programming, though, they’ve made it available on small screens starting today. I can’t think of a better way to spend the weekend than burning through a trial subscription to Disney+.

Of course, there are plenty of ways to watch movies with local film organizations instead of multinational entertainment conglomerates. Over the course of the long pandemic, our friendly neighborhood art houses have built diverse streaming collections through partnerships with indie film studios. Some highlights of this week’s new releases below.

Crystal Moselle has reunited her Skate Kitchen cast for an episodic series for HBO (Betty), but before dropping back into the half pipe with the New York City crew of young woman skateboarders and their misadventures in a male-dominated recreational sport you might want to revisit the original. A highlight of SIFF 2018, Moselle’s style (honed in the documentary realm of the mind-blowing The Wolfpack) brought a sense dynamic realism and immediacy to quotidian drama of a vibrant group of diverse women. ($3.99 rental supports NWFF)

This week’s Movie Club spotlights a true indie gem from SIFF 2018: Thunder Road, written, directed, and featuring a virtuoso performance from Jim Cummings navigating a roller-coaster of tumultuous emotions, a few breakdowns, and some hilarious real feels in the wake of his mother’s death. When I tell you “you’ll laugh, you’ll cry” I mean often, and at the same time. Free on PrimeVideo and Kanopy, you’re on your own to stream it before convening via zoom with SIFF programmer Megan Leonard, writer/director/star Jim Cummings and producer Benjamin Wiessner for a wide-ranging Q&A. (Wednesday June 8, 8:00 pm)