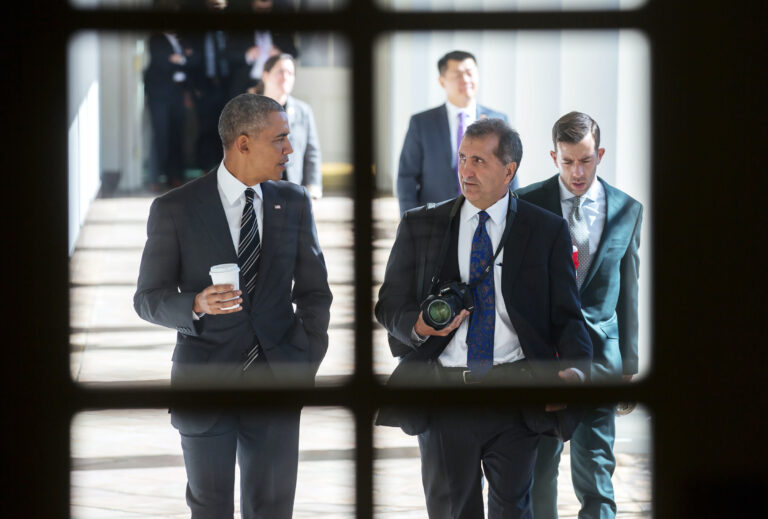 As official White House photographer for eight years, Pete Souza had an unparalleled view into the Obama administration. During this time, his images shaped our perception of the presidency and the first family, spanning everything from private moments at home to formal visits by heads of state to the defining image of a crowded Situation Room moments during the raid that captured and killed Osama bin Laden. Souza rightfully prided himself on creating images of Obama as a human being and showing “how the job of president should be done”. So, after snapping those last photographs in January 2017 of the transition of power — Obama leaving a note for his successor in the Resolute Desk, leaving the White House for the last time, arriving at the Capitol for the inauguration, and departing by helicopter — Souza found himself with a lot of free time on his hands. He initially took to relaxing and returning to the calmer realm of nature photography, but eventually the previously-non-political photographer’s frustrations with what he saw from the new president spurred him to a second act: freelance social media commentary. Through an Instagram account that swelled to enormous popularity, he reposted images from the Obama administration that drew, with increasingly cutting captions, sharp contrasts with the unfolding dramas and controversies of the Trump era.

In a throwback to the blog-to-bookdeal heyday of the mid-2000s, his posts came to be collected in a book called Shade and Dawn Porter’s new documentary picks up with Souza on tour, sharing the images with auditorium after auditorium of admiring fans around the world from the #resistance. While the film is ostensibly the story of how an apolitical photographer “found his voice”, complete with his biography and complemented by commentary about the role of the presidency and the power of images from the likes of historian Doris Kearns Goodwin and longtime Obama advisors Samantha Power and Ben Rhodes, the primary selling point is the occasion to revisit the vast trove of moments that defined the Obama Era. And what a trove it is — I spent several years on the periphery of live music photography, and to the extent that that experience give me even a sliver of insight into the physical realities of Souza’s job, my mind absolutely boggles and the physical and mental toll of a completing decade-long photo marathon. It’s a tremendous achievement and for those (like me) who have spent the last four years in near-constant anger or despair, revisiting these pictures are both a nostalgic balm and cutting reminder of the degree to which the world turned upside-down in November 2016.

The ground-level observations of the presidency clearly transformed him, but lest we think that Souza started in-the-tank for Obama or got the job for being a longtime Democratic shill, a section of the documentary steps back to his history as a newspaper photographer and later as part of the official White House photography team Ronald Reagans, where he also created memorable and humane images of an American president with far different policy positions. These photographs, too, were instantly iconic: from the political (deliberations in the midst of the Iran-Contra scandal, holding summits with Gorbachev) to the personal (Nancy and Ronny in love, on the ranch, chopping down a Christmas tree), projecting the sense that the government was run by “real” people. In showing his work from two vastly different presidents, one comes to understand the role of the White House photographer, yes, as a visual historian, but also a sort-of propagandist, no matter how well intentioned. The photographs, after all, use the White House and the presidency as a stage and only a select few are shared with the public to construct a particular narrative about the president and the presidency itself.

To this end, Souza and the Obama White House democratized decades of White House photography by posting dozens of photos per day to an official Flickr photo stream. There, Americans got to see a (highly curated) bit of what he saw everyday in his role as a fly on the wall, from events big and small. In part, Souza describes the impulse to share these images as stemming from Obama’s understanding that images of him being president could change attitudes about what is possible and achievable (he didn’t, however, entirely reckon with how they could also awaken a horrific racism). The entire collection is outstanding, but I found those of the family are the most striking: Sascha & Malia growing up, playing with their dad outside the White House on a snow day, the family traveling to Africa where they visited his grandmother’s grave and Mandela’s prison cell. They show the president as a person — one who was thrilled to have a picture of him shooting hoops with Reggie Love during a UN visit blown up to jumbo size for the halls of the West Wing’s rotating collection and whose best day in office was when he got to step in as coach for his daughter’s basketball team. They also show Obama’s effect on other people: a small Black boy touching the president’s hair and consoling parents whose children died in the Sandy Hook massacre. The list goes on, and Souza has found ways to keep these outstanding photographs alive, in pointed conversation with the present, and a testament to the enduring power of still images in an era of constant streaming video.

As much as Souza’s disappointment in Trump is based policy and personality, you can also sense his anger at the current president’s sloppy and lazy execution of image-making. In comparison to the rich archive of photographs from both Souza’s collection as well as his predecessors, it’s impossible not to note the precipitous decline in quality and quantity of photographs from the Trump White House: often shoddily composed, typically staged with rictus grins and tacky posed thumbs ups, almost never hinting at a sliver of humanity or revealing anything resembling an inner life. In the scale of all of the possible objections to this presidencies, aesthetics are obviously among the smaller matters, but revisiting his rich archives was the first time that I came to notice the degree to which the lack of humanizing images from the Trump administration. I am far from an objective observer, but immersed in Souza’s archives, I struggled to recall a single image from the last four years of Donald Trump bring joy or comfort to another person or even enjoying his time in office. Regardless of policy, it makes for a long four year void, and has further hollowed-out the presidency and our relationship to it as a country.

As we find ourselves days before an election, the timing of this documentary is impeccable. Yes, it provides a look back at the previous administration — which already feels like a far bygone era — but also serves as a compelling reminder to look forward and imagine what it is that we want to see, both literally and in terms of policy, for the next four years.

The Way I See It, playing in ‘select theaters’ airs tonight, commercial-free, on MSNBC at 7 PDT (that’s “After Maddow” for the Rachel-heads out there).