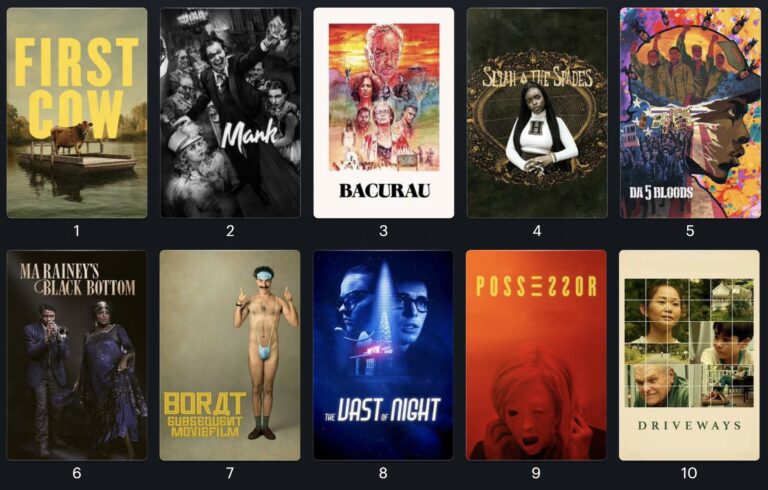 Like most of you reading this, I spent a lot of 2020 sequestered in my place, watching movies. And while I didn’t get to catch quite as many new films as my colleagues, the 2020 movies I did see were, by and large, pretty choice.

There were indeed a lot of 2020 efforts that would’ve likely been shoo-ins for a Best-of List had I seen them, so I’ll admit to having a slightly myopic list in comparison to years past. That said, below please find my favorite films of 2020 (and yeah, there is some overlap with SunBreak early bird Chris Burlingame’s list and mine).

10. Driveways (Andrew Ahn). Sometimes, a quiet, well-observed little indie dramedy is its own reward. I’ve already articulated, in much more involved fashion, my immense fondness for this movie, its unforced emotional pull, and the moving farewell it provides for the much-missed Brian Dennehy.

Driveways is available for rental or purchase On Demand, and is also airing on Showtime.

9. Possessor (Brandon Cronenberg).  Brandon Cronenberg’s sophomore effort finds him taking the ever-fertile terrain of body horror brought to the world’s attention by his father David, and running like (literal) bloody hell with it. Nothing else I saw this year messed with my head with such visceral efficacy, and Andrea Riseborough remains one of the most striking human beings to be put in front of a camera.

Possessor is streaming for rental or purchase On Demand.

8. The Vast of Night (Andrew Patterson). I saw a lot of genre cinema done right this year (as befits my rather genre-heavy list), but the lean, classic pulp elegance of the story here, and Patterson’s ratcheting of tension, put it a cut above.

The Vast of Night is streaming on Prime Video.

7. Borat Subsequent Moviefilm: Delivery of Prodigious Bribe to American Regime for Make Benefit Once Glorious Nation of Kazakhstan (Jason Woliner). There’s not much I can add to Chris’s thoughtful analysis of this sequel to Borat, except that the movie’s as howlingly funny as the first; that Maria Bakalova inhabits Tutar Sagdiyev with hysterical fearlessness that matches Cohen’s note for note, and that this represents satire so cutting, sharp, and savage, it draws blood—and probably will, for quite some time.

6. Ma Rainey’s Black Bottom (George C. Wolfe). It says a lot that this vividly-rendered adaptation of the August Wilson play made me forget its stagebound origins, more than once. Credit Wolfe’s kinetic direction, and especially the stem-to-stern great performances. Boseman’s swan song is so miraculous, its greatness may as well be certified by passage of a formal ordinance. But shout-outs are also in order to Viola Davis’s tough-as-nails grande dame of a blues singer and veteran character actor Glynn Turman’s wise, conflicted piano man Toledo.

5. Da 5 Bloods (Spike Lee). Leave it to Spike Lee to craft a riveting character-actor-driven classic Hollywood adventure, then rub it raw with the hard truth. So dense with purpose and ideas, it’d almost collapse on itself but for Lee’s master touch and that to-die-for cast.

Da 5 Bloods is streaming on Netflix.

Selah and the Spades is streaming on Prime Video.

3. Bacurau (Juliano Dornelles, Kleber Mendonca Filho). Never before has one movie delivered arthouse thoughtfulness, multiple exploitation-cinema punches to the chops, a sense of rich regionality, strong and affecting characterizations, and Udo frickin’ Kier in such a cohesive—and colossally enjoyable—package.

Bacurau is currently available for rental or purchase On Demand, and is out on blu-ray and DVD.

2. Mank (David Fincher). David Fincher’s snapshot from the life of Citizen Kane’s co-writer is an unabashed love letter to old Hollywood, and as such, . It’s also an utter visual feast boasting a full-on star turn with a capital S from Gary Oldman, as well as a juicy supporting performance from Amanda Seyfried as the savvy, criminally underestimated Marion Davies. The movie’s as uneven, specious in its details, messy, and flawed as its subject, but that’s the point: This is Hollywood mythology, related with the same grandness of gesture and looseness of details that its colorful subject woulda employed in one of his own scripts.

Mank is streaming on Netflix.

First Cow is available for rental or purchase On Demand.