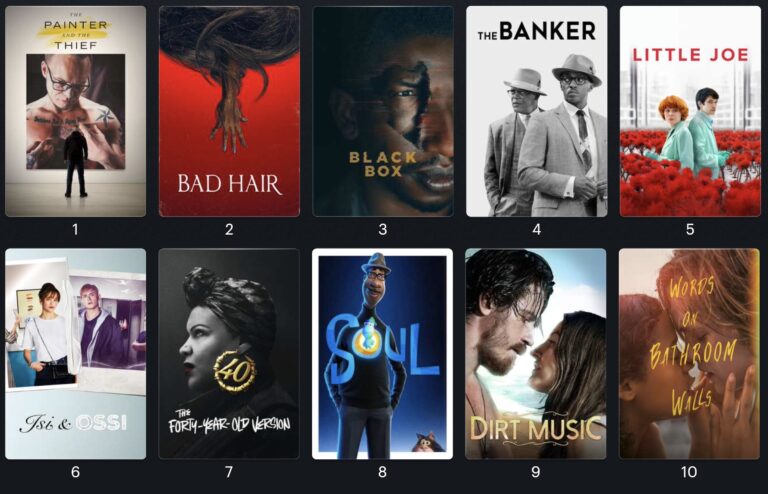 At least something is consistent and reliable this year as in past years: I waited until the last moment to get my “best of” list up. That being said, there are a lot of fantastic films that made their way to our living rooms despite the insanely crap circumstances the industry has had to endure through the pandemic. Enough about that though, let’s talk about the good that came out of this year.

I decided to take a different tack than years past when choosing my “favorite” 10 films. I used quotes because they may actually not be my favorite in the traditional sense, but they speak to what matters the most. They delve into parts of our culture that should have, that require, attention. I found myself drawn to Black and POC directors, actors and writers. I wanted to delve into cultures outside of my own, open my mind to people and their experiences that I would not otherwise get a chance to explore. It’s time we step outside of ourselves and find what not only makes us the same, but what makes us incredibly and beautifully unique.

10. Words on Bathroom Walls (Thor Freudenthal). While there were probably several other films this year that impressed me or hit me just in the right spot, Words was a noble effort at speaking honestly, without holding back, about the perils and heartbreak brought on by mental illness. Add the layer of teenage angst and wishing desperately to fit in, knowing with absolutely certainty you never will, and my heart ached for the main character. With decent acting and good writing, this one had to make it into my list for the year.

9. Dirt Music (Gregor Jordan). Admittedly this is, mostly, about two people desperate for love and thankful they found each other … in those circumstances we can only hope to fill that void with someone worthy of ourselves, but most often we get into even more pain and grief than what caused the desperation to begin with. While the emotional experiences portrayed are universal, the Australian wilds so beautifully captured are not. I still can’t get over the sweeping landscapes found throughout the film and I hope one day to see them for myself.

8. Soul (Pete Docter). Relationships dominated our lives this year whether it be their lack or abundance. I dedicated more time and energy to them than I ever have in the past and I know it will pay off tenfold for the rest of my life. Soul is the most recent in a long string of films that speaks truly and without embarrassment about feelings we tend to hold inside, never to share them with the people we hold most dear. While the story was bigger than just the friendship between two beings, that is the core of what pulls us into its story. It’s hot off the presses, so if you haven’t had a chance to watch yet, New Year’s Day is the perfect time to catch up.

7. The 40-Year-Old Version (Radha Blank). Admittedly this is another film I just watched this week (Soul being the first) in the hopes of finding those final hidden gems to add to my list. While I felt uncomfortable in fits and starts, I have to admit that the way Blank wrote herself both as a character and as a human being hit me like a lightening bolt. Being single and 40 myself, I felt seen and called out at the same time. I felt vulnerable and sad, frustrated and excited. While being a white woman kept me from truly understanding the struggles she faced in her career, I definitely felt the pangs of sex, love, work, and art that she searched and pined for throughout.

6. Isi & Ossi (Oliver Kienle). I stumbled upon this romantic comedy by accident. As we were all prone to do from time to time in 2020, I scrolled, and browsed, and boredly scanned through all that Netflix has to offer and after getting a hint of the storyline, I said that all too familiar “eh, why not?” and jumped in to this delightful flick. It’s a typical tale of classism and love clashing, but with a slightly edgier tilt. Isi has drive and passion in a career her affluent parents find beneath her. She finds Ossi, who is desperate to climb out of poverty and pull his family out along with him. Schemes bring them together but attraction and compassion bind them.

5. Little Joe (Jessica Hausner). This is a straight up psychological thriller. It’s a little slow-paced but the payoff is worth it. The colors throughout the film are gorgeous and sometimes I just like to watch with eyes wide and wondering who’ll die next. It was so much fun and I may have maniacally laughed more than once as plants destroyed people. Hey, we kind of deserve it.

4. The Banker (George Nolfi). Here’s a film with a seriously boring name, but so much more than I ever expected. It was well acted and revealed a version of history that, as we have learned throughout the last decade, was grossly distorted and swept under the rug so as not to disturb the white version of American life. Working with and around the system, as people have color have so long been forced to do, two men found a fortune. Their courage, ingenuity, and drive would never be given the credit it was due in their lifetime, so it’s about damn time we started telling these stories in ours.

3. Black Box (Emmanuel Osei-Kuffour). Blumhouse has always been on the edge of my vision for solid horror films that appeal to the masses rather than horror fans. They typically draw on psychological fears rather than gruesome ones and that’s precisely my sweet spot for fear-driven flicks. I had been tortured by Memento for years, ruminating over what it would be like to forget your life, your daily experiences, every time you went to sleep. Well heap on top of that a daughter that needs you, but has to raise herself (and keep an eye on you) and the mystery of what really happened when you lost your mind and your wife lost her life. Now you’re coming close to what Black Box offers and you can understand why I ranked it so high. There are twists and turns yet to be discovered and you’d do well to find out what happened for yourself.

2. Bad Hair (Justin Simien). If I were to tell 2019 me that three horror films (psychological or not) would grace my top ten list of 2020 I would have given 2020 me the side-eye so hard it would have stuck that way. But here I am, and Bad Hair had to be high on my list. A film that is sadly under-appreciated, by both viewers and critics alike, blew me away. I laughed at its ridiculousness, got angry at its truth and screamed “Oh my God!” (always followed by maniacal laughter) more than once. “No way!” and “YES!” may also have been uttered on occasion. A blast on white folk, women, and the ridiculous lengths Black women have had to go to for decades to tame their beautiful, wild, and natural hair. This film calls out that absurdity with over-the-top and horrifically gleeful moments of retribution and damnation. I had the joy of watching it at Halloween, but it can be enjoyed any time; as a matter of fact right now sounds absolutely perfect to me, so go watch it.

1. The Painter and the Thief (Benjamin Ree). The pain and heartache that pumped the lifeblood through this feature still lingers with me even after seven months. It’s still a little hard to believe that it was a documentary considering the open and honest emotional outpouring displayed by both the leads, and the relationship they formed is something on the two of them can truly understand. How would the rest of us react if we found out the product of our passion, the thing we hold most dear, was stolen? Then, how would we view the person who had done it? I don’t know that my compassion flows so easily that I would be able to forgive, and in turn become fascinated by the thief in question. Perhaps that’s what lingers on my palate after all this time, maybe the curiosity, the empathy and love that the artist shows for her “villain” is something worth exploring. That villain, with her compassion in his hands, then becomes an open book comprised of a bundle of emotions sometimes too volatile to contain. I was moved.

Honorable Mentions
Here’s a few that really struck my fancy, but didn’t quite make it onto that illustrious top 10:
Superintelligence
Emma.
Onward
Palm Springs
The Photograph
Class Action Park