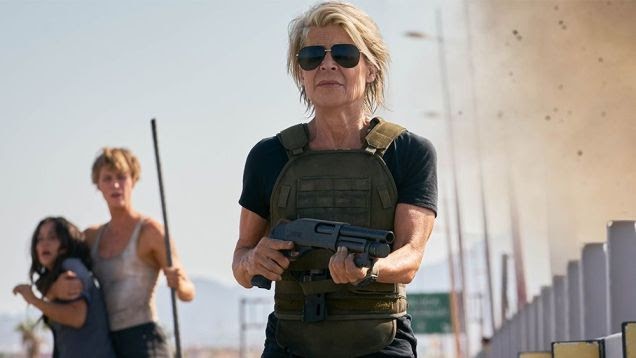 This weekend brings the improbable release of a second third installation in the Terminator franchise. Like those killer robots from the future, this is a series fully unconcerned with rewriting its own past and future. Yes, the trilogy already had at least one “ending” with the machines rising just as Nick Stahl and Claire Danes hunkered down deep underground to await the apocalypse. But it’s been nearly twenty years and now James Cameron returns as producer to erase the various sequels, spin-offs, and television series that followed his post-Judgement Day exit from the franchise to clear the slate and correct a major error. In this timeline, he fires up the digital de-aging technology to keep Sarah Connor alive while unceremoniously killing off her beloved son John, the savior whose impending existence motivated all that murderous time travel in the first place. With that bloody beach holiday gone wrong, we find ourselves in a new timeline with no menacing SkyNet or rebellion commanded by John Connor, yet one where a different Judgement Day still looms on the horizon, catalyzed by another inevitable streak of human hubris.

The main way to enjoy (or endure) this (or any) Terminator sequel is to try, minute-by-minute during the two hour running time, not to ask yourself why — from the simple to the profound. Why, if these merciless robot overlords were smart enough to invent time travel, haven’t they mastered the fairly basic art of sending their mercenaries to an inconspicuous landing spot? Why take human form if you’re just going to flagrantly do cool robot tricks in plain sight to reveal yourself to be a supernatural murderer from the future? And for that matter, why do the robot overlords of a scorched earth even bother to send back killers one at a time in human form to carry out targeted assassinations in broad daylight when they could instead just, I don’t know, arrange a drone strike in the dead of night and be done with it?  Why go to any of this trouble at all if, apparently, changing the past creates a diverged timeline rather than re-writing the future? Why keep tinkering with this series?

The answer to the last one is fairly simple: the primary reason for this film to exist is to get the Linda Hamilton back in the iconic role of Sarah Connor and emphasizing cement that character as the true hero of this messy franchise (To be fair, the short-lived Sarah Connor Chronicles, starring Lena Heady also tried.) Here, in her early sixties and in great shape, she embodies Connor as fully exhausted by her life of living off the grid, drinking herself to sleep every night, subsisting off a diet of potato chips, and killing the occasional robot whenever she gets a chance. Wary of this awful world, angry at the state of her life and the lack of respect that she gets for saving three billion people, and staying alive mainly because she can’t think of anything better to do, she’s grumpily drawn to another quest to make use of her extreme competence and war chest to once again postpone the ever-dire future. This time, it’s by packing up the station wagon with a bunch of guns and heading to Mexico City to help an augmented human from the future (Mackenzie Davis, beyond decent as a desperate soldier whose hardware isn’t entirely equipped for the mission at hand) sent to protect the latest high value human target of destiny (Natalia Reyes, completely fine, as a sparky labor leader with an important future on the dark horizon) from a shape-shifting killer machine (Gabriel Luna and a whole lot of CGI, upgrading T2’s mighty morphing mercury to an semi-autonomous black skeleton with a bluetooth-paired coat of black transforming goo). Oh, and it wouldn’t be a Terminator without bringing back Governator Arnold Schwarzenegger, now an older, wiser, cyborg of the woods. Having finished his Terminating in the prologue, the O.G. killer robot  inexplicably remains in the past without further objectives, but retirement from time-tinkering seems to have suited him: he’s got a beard and cargo shorts, an adopted family, a thriving window treatments business, and a barn full of guns (it’s Texas and the probability of human barbarism remains significant).

Tim Miller pulls this gang of old and new together for a classic setup of distrust, compromise, and dry quips in service of the greater good, hopping back and forth in time to reveal pieces of this newly re-written mythology. To offset all of the gloom and doom, there are some fun jokes at the expense of our wretched modern surveillance state and immigration policies. All of which is fodder for a relentless series of computer-assisted fight choreography and entertainingly staged chase sequences across land, air, and sea, each trying to outdo the next, culminating in an insane sequence in military cargo jets play bumper cars and a zero-G fight sequence results in Hummers parachuting into the Colorado river. It’s mostly fun until it gets a little bit exhausting. There’s a formula for how these things end, so if you’ve seen one you can’t be spoiled about how the final fight turns out and the number of inspirational speeches that are made along the way. As silly as it all gets, it’s not the worst way to spend a couple of hours.

In the end, the unaddressed dark fate may be the degree to which everyone accepts this forever conflict. The humans struggle to postpone Judgement Day by a decade or so; the machines try to kill off a future rebellion leader. Neither side seems to have any interest in using their vast intelligence or foreknowledge of the coming crisis to address the root cause of all of this violence. The best case scenario for our human heroes is to keep some potential rebellion leader alive long enough to survive the impending horror just to rally the survivors to fight in a hopeless war, a very on-brand human instinct for self-preservation and disproportionate investment of resources in inspirational military leaders. The best hope for any of them is postponing the robot apocalpyse long enough for humans to just destroy the planet through other means. (At least Thanos had the alleviation of suffering on his mind when he snapped half of all life out of existence.) But like I said, this movie doesn’t exist for addressing questions and giving them too much thought is a real bummer. So if you’ve got a few hours to erase, don’t hesitate to see this latest revision. All of our old friends are charismatic enough and its fun to see them back in this playground, particularly with someone like Miller at the helm, accepting that this territory is as ripe for comedy as it is for explosive setpieces. They’ll be back and so will you.  ☆☆½

Not up for killer-robots? Festival fare now in wider release include Edward Norton’s spin on Jonathan Lethem’s Motherless Brooklyn, transporting the gumshoe story back to 1950’s New York. [Telluride Review] and Taika Waititi’s turn as twee Hitler in Jojo Rabbit [OIFF Review]. Neither of these were really for me, but they might be for you? Plus, Cynthia Erivo plays Harriet Tubman in an action-packed long-overdue biopic, which seems to be getting generally favorable reviews.

A few other picks from me and Tony (TK) to consider for your weekend watching.

Want another movie where the protagonist appears out of nowhere and spends a good part of his introduction shivering and naked? Nadav Lapid’s loosely semi-autobiographical story of an Israeli arriving in Paris to discard one identity and create a new one was among the film highlights of my weekend at the Orcas Island Film Festival. It’s engrossing, challenging, and thought-provoking. (SIFF Uptown)

Halloween may be history by the time it opens at the Grand Illusion, but this new horror anthology is co-piloted by some of the PNW’s best indie genre filmmakers, and its Christmas setting renders it pretty darn timely. Like every omnibus film, some segments land better than others, but it’s never less than hella fun. (TK)

Belted. Buckled. Booted. Badass. Tura Satana on Screen Half-Native American, half-Japanese exotic dancer Tura Satana was too much woman for mainstream cinema, but she was an indelible presence in some of the wildest genre flicks of the ‘60s and ‘70s. Her work as vicious, take-no-shit gang leader Varla in Russ Meyer’s 1965 cult classic Faster, Pussycat! Kill! Kill! remains the proto-feminist template for every strong female genre icon of the last five decades. Author and GeekGirlCon co-founder Jennifer K. Stuller takes a deep dive into Satana’s body of work with this presentation. (SIFF Film Center, November 2, 1:00 – 4:00 P.M) (TK)