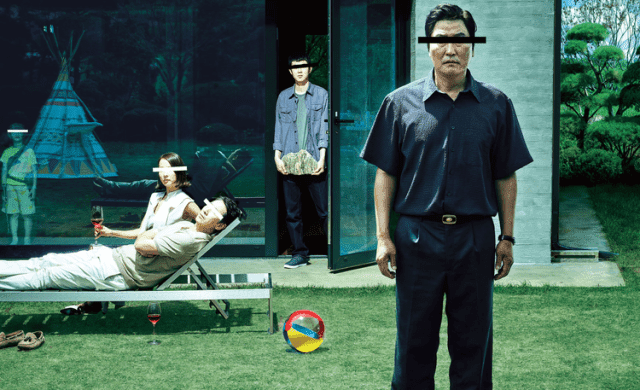 As you probably know, I’m a little later to the film discussion game than my well-versed and eloquent cohorts but I’ll do my best to let you in on my favorites from 2019. They’re loosely in order but some of them are a toss up.

Without a doubt, this was my favorite film of the year. Its complexity has stayed with me months after watching it. You want to love this family, you want them to find a way to move up, succeed and move out of the literal stinking square box where they live. With cunning and wit, you watch them get what you hoped they would and then regret ever backing them in the first place. A gasp left my lips at least once, probably more and I can’t wait to see what Joon-ho has in store for us next.

Tradition, love, and family; a heartbreaking story of what we all do for the most important people in our lives. Awkwafina has very steadily become one of my favorite actors in the business and without a doubt, if she is in a film going forward I will give it a serious go. I adore films that submerse me in cultures of which I may not have an intimate portrait. I cried so many times I lost count and just like the lead, I have absolutely no ability to hide my feelings. Over and over I imagined being her, and it broke my heart. This well-told, powerful and beautiful portrait of a family (the challenging and loving parts as a whole) won’t soon be forgotten.

The reason this film was so captivating was the newcomer and lead actor Lorenzo Ferro. In this true-to-life story about baby-faced serial killer Carlos Robledo Puch, Ferro was impressive from beginning to end, and you never quite knew whether you loved Puch, hated him, or simply felt fascinated by his raw psychopathic tendencies (murder came so easy, it was creepy). I want to watch it immediately and never again; I’ll probably go with the former. You’re in luck, you can watch it now on HBO if you have a subscription or manage to finagle a friend’s login.

A witty and darkly comedic look at a grim subject, the war between Palestine and Israel. A fake it till ya make it story where a man gets in trouble at the border while heading to work as an errand boy on a soap opera. He becomes entangled in an uneasy friendship with the head border agent where the consequences are far more severe than an American buddy comedy and that tension, walking on a knife blade between hilarity and death, is what really stuck with me. One of my favorites from SIFF and well worth seeking out.

If you’ve read some of my other reviews this year, I’ll bet you already know I’m the sentimental sort. Just from the trailer I knew where the story, to an extent, would go and without a doubt I wanted to go along for the ride. If you mix the lush and adorable visuals of Amelie with an original grim fairy tale, you get Remi, Nobody’s Boy. There were a couple turns here and there that you didn’t see coming but for the most part, it was an endearing, beautiful and sweet way to spend an hour and forty-five minutes.

It’s difficult to describe this film, engrossing for certain, tense, desperate, and emotional. It’s so far out of our normal everyday lives that I fell into it immediately and still felt dazed long after leaving the theater. Only communicating in clicks (a very old language used by farmers in her village), mute Sibel deals with being ousted for her disability where being accepted and marrying is the most important thing for a young woman. She’s self-possessed, strong-willed and will not let her life be treated as nothing. It was one of the biggest hits at SIFF this year and hopefully it’ll be back to catch again in the theaters.

Unless you consider The Farewell a comedy (which is questionable at best) this is the only straight up funny film on my list. It’s pretty shocking considering films have been my respite from the harsh realities of the world, but I digress. Booksmart was a fantastically funny, witty, and downright feminist movie from beginning to end and I’ll watch it many more times before it’s even remotely tiresome. While it has all the importance and wisdom of The Hangover, I found it incredibly refreshing and endearing to see women, intelligent women, acting like complete idiots in the name of having a good time. Ladies can act like jackasses too and be entertaining as hell, thank jeebus somebody finally did it right.

This was a late entry into my top ten. I only managed to see it very recently and while it’s so difficult for me to watch a film where I know the pain felt by the protagonist is coming, Shia Labeouf, whose life this was based on, pulled no punches. I was taken aback by this revealing portrait of someone most of us know so little about. How can any of us know the realities, the pressure of being a child actor (successful or not) especially if you don’t have the money to handle it and parents who care more about what you can do for them than the other way around. While you hope that the semi-sweet resolution at the end means good things to come for Labeouf, you just can’t be sure and therein lies its charm.

Like Chris’ #10 of 2019, this film didn’t make my list based on it’s endearing, or charming qualities. It left me feeling like I’d been run over by a truck. War isn’t exactly my favorite subject but it’s making a comeback around the world like we haven’t seen in quite a while, so it’s hard to ignore. It’s also one of those things we should force ourselves to endure and learn from if we’re ever to understand other cultures, the basic destruction of conflict, and even ourselves. White supremacy, revenge, and turncoats are just a few of the major themes that make this complex and intense film one of the most memorable of the year.

While my colleague Tony ripped this film a new one in his review (linked above), I have trouble shaking this one from my memory banks (and trust me, things fall out of there like loose change from a hole in your pants pocket). Without a doubt it was Joaquin Phoenix’s performance that pervaded my psyche. He has a way of delving head first into a role with every ounce of his being leaving you to wonder if he’ll ever come out the other side in one piece. For me, though, there was so much more to the film than that. The visuals alone, not just the grimy, gritty world Phillips created, but the over-saturation and almost profane brightness of the main character’s clothes and makeup were in stark contrast to what was going on inside his head and felt like whiplash. I also like that, while the makeup was definitely more than a slight nod to the Joker character we all knew and loved, that’s where the similarities really ended. This was a character study through and through, and while using the basic gist of the Joker story is what brought us to the theaters, it was more of a secondary aspect pulling at our (very overworked) sense of nostalgia as an underlying reason to learn more about the man Phillips was attempting to open like a book.

And finally, my favorite movies of the decade (based on my craving to watch them again or how entwined they are in my memory… best is just too dang hard):