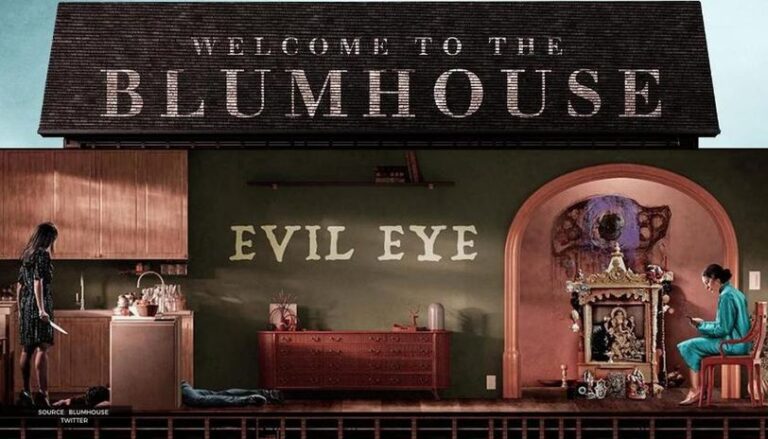 One of four Blumhouse releases this month on Amazon Prime, Evil Eye arguably sees the most onscreen talent of the quartet, though perhaps, and very unfortunately, the least believable scenario. The drama and only semi-serious intensity could hit you in the funny bone or cause an eye roll or two… take your pick.

Young Usha (Sarita Choudhury) escaped an abusive relationship but her jilted lover refused to go silently into the night. After finding another, Krishnan (Bernard White), and with their child on the way, she was faced with her past and nearly killed by it. Some thirty years later, she fears that her daughter Pallavi (Sunita Muni) may be plagued by the same curse, but no one seems to believe her. Has she gone off her rocker or is she the only one who sees through her daughter’s new beau? If you’ve experienced a Blumhouse film, then I think you know what the answer is.

Sorry to disappoint, but this film peters out pretty quickly. I’m so smitten with Mani that I was holding out hope (she’s such a hot ticket recently with roles in GLOW, Mr. Robot, and yes even the goofy Progressive commercials). With such a talented cast, I was ready for a decent scare and a cheeky good time. While the cheek was there, the overly-dramatic scenes just didn’t land and I was left feeling like I was watching a soap opera instead of a horror-thriller. If that’s your cup of tea, then go for it. Or maybe you’re just looking for a “scary-ish” film to satiate a Halloween craving? You could do worse. Otherwise, you can let this one go past without regret.

In either case, check out my thoughts on two of the other Blumhouse releases this month Nocturne and Black Box, to find out if these are little more worth your time.

Evil Eye is available to stream on Amazon Prime Video